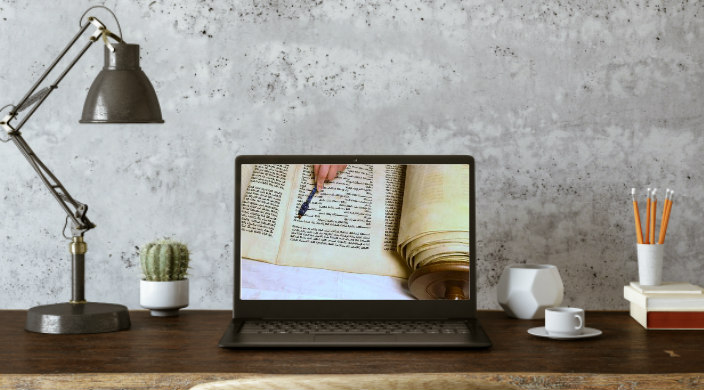 Shavuot, like most other Jewish holidays, has been celebrated in many different ways throughout Jewish history. What began as an agricultural festival marking the beginning of the summer wheat harvest transformed into a holiday celebrating the Jews receiving the Torah TorahתּוֹרָהLiterally “instruction” or “teaching.” The first five books of the Hebrew Bible (Genesis, Exodus, Leviticus, Numbers, and Deuteronomy); the handwritten scroll that contains the first five books of the Hebrew Bible. Also called the Pentateuch and The Five Books of Moses. “Torah” is also used to refer to the entire body of Jewish religious teachings and insight.  at Mt. Sinai, often accompanied by eating dairy (or dairy-tasting) foods and all-night-long Torah study.

The COVID-19 pandemic has shifted so much of how we engage Jewishly, but Shavuot is a fantastic holiday for families to celebrate from the safety of their homes. Here are a few ways you and your family can observe this rich, festive Jewish holiday this year.

1. LEARN ABOUT THE HOLIDAY.

Because Shavuot in and of itself is a celebration of Jewish study, you can use this time to learn more about the holiday, ranging from its agricultural origins to what it means to Jews today. You can learn more about the Reform Jewish custom of confirmation – the ceremony of teenage Jewish children dedicating themselves to Jewish life – and why it’s connected to this holiday. We have even developed a fun quiz you and your family can take to test your Shavuot knowledge, and you can also teach your children about the holiday by reading a story by Rabbi Sara Sapadin.

One custom of Shavuot stems from a story in the MidrashMidrashמִדְרָשׁRabbinic interpretation of a passage from the Bible. Midrash falls into two categories: midrash halachah is concerned with religious practice and law, and midrash aggadah is concerned with interpreting biblical narratives and stories, . The ancient Israelites overslept when the Torah was given at Mt. Sinai, so Moses had to wake them up to receive it. Today, to make up for the acts of our ancestors, many Jews stay up very late – sometimes all night long – to study and celebrate the giving of the Torah. This act is called Tikkun Leil ShavuotTikkun Leil Shavuotתִּקּוּן לֵיל שָׁבוּעוֹתA celebration specific to the holiday of Shavuot, it includes a late-night – or even all-night – study of Torah and Jewish texts that commemorates receiving the Torah at Mount Sinai. , or “repairing the night of Shavuot.”

To keep this tradition alive during quarantine, you can host your own late-night Torah study with your family and even throw a Shavuot slumber party!

Want to join an existing event? Check out this list of Reform Movement events you can attend online and find other Shavuot events going on in Reform congregations throughout North America.

Rabbi Matt Green of Congregation Beth Elohim (Brooklyn, NY), in explaining how Jews can elevate Shavuot in the 21st century, says, “If we are to receive a fully integrated Torah – an essential story in which all Jews can see themselves – then we need to incorporate a maximal number of people in the process.

While Jews today work to “repair the night” of Shavuot through late-night Torah study, we are also obligated year-round to repair the world (tikkun olamtikkun olamתִּקּוּן עוֹלָם"Repair of the world;" Jewish concept that it is our responsibility to partner with God to improve the world. A mystical concept of restoration of God's holiest Name to itself and the repair of a shattered world. Often refers to social action and social justice. ). Shavuot is a great chance to learn – and teach your children – more about the maladies that plague our society, ranging from income inequality to lack of access to healthcare (particularly during this pandemic) to systemic racism/prejudice and beyond.

The Religious Action Center of Reform Judaism (RAC) also has numerous resources available to teach and inspire others to repair the world during this time, and even recently launched the 2021 Racial Justice Campaign, which you are fully invited to be a part of. The RAC is also hosting its final two sessions of its series Understanding Reparations: Session 3 - A Jewish Perspective for Repair, so be sure to register and be a part of this engaging and vital conversation.

There are lots of theories behind why Jews customarily eat dairy on Shavuot. Some associate it with the ancient Israelites switching to dairy foods after they were given the kosher laws and realizing their meat was not kosher. Some associate it with the Song of Solomon, which compares the Torah to “honey and milk.” (4:11) Some may just see it as an excuse to eat some kugel, cheesecake, and blintzes.

Whatever the symbolism means to you, we have a plethora of Shavuot recipes both with and without dairy (including a nifty kugel recipe list!) to keep you and your family happy and full during your late-night Torah study at home. You can also use this time to learn how to make your own ice cream, cheese, or butter.

Shavuot is a reminder of what Torah means to Jews, but it is also a call to learn and celebrate all year long. You can do this, in part, by signing up for Ten Minutes of Torah, a daily email connecting more than 20,000 subscribers to Torah commentaries, blog posts, and essays about all things Jewish. Be sure to also sign up for RJ on the Go, the Reform Movement’s virtual community dedicated to celebrating Jewish life through meaningful, fun and interactive experiences - from science to art and Jewish text and beyond. You can also stay up-to-date on URJ camp registration and learn how your children can learn, play, and engage Jewishly at summer camp, with health and safety being our highest priorities.

Subscribe to our podcasts On the Other Hand: Ten Minutes of Torah (which will also have a special Shavuot episode), Wholly Jewish, and Stories We Tell – all three of which provide stories, ideas, and experiences from a variety of Jewish perspectives.

Chaim Ezra Harrison (he/him/his) is the Communications Manager at Keshet and a former writer/editor for the Union for Reform Judaism; he is an alumnus of the 2018 2018 JewV’Nation Fellowship’s Jews of Color Leadership Cohort. Chaim also contributes to USA TODAY and is a Professional Certified Marketer® (PCM®) and Certified Digital Marketing Professional (CDMP) with dual certification from the American Marketing Association and Digital Marketing Institute. Chaim lives with his partner and four pets in metro Detroit, where he serves on Temple Beth El’s Board of Trustees and is actively involved with his local Jewish Federation.

END_OF_DOCUMENT_TOKEN_TO_BE_REPLACED

On Tu Bishvat we celebrated trees and a season of new growth. I've been doing lots of thinking about trees, as I frequently do, and the role they play in providing oxygen for the planet. At the Union of Reform Judaism, we provide oxygen to our communities by creating compassionate spaces for our participants to grow and thrive. We can respond to current and future challenges by fostering resilience that reflect our Jewish values.
Jewish Values
Image