How Two Canadians Came to Understand and Celebrate American Thanksgiving 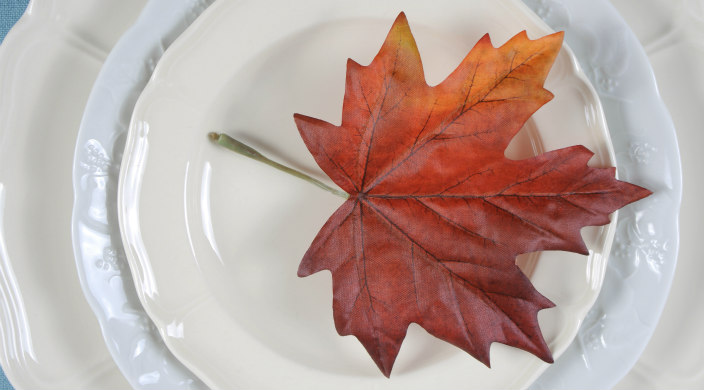 As Canadian clergy working in a Reform congregation in New Jersey, we encountered our share of confusion about American Thanksgiving during our integration into life in this country.

Cantor Marer: I’ll never forget the time I tried to convince my boyfriend (now husband) that we should go out of town during American Thanksgiving. “It’s four days off together!” I insisted. “It’s the perfect time!” I watched his expression turn from surprise to intrigue. What followed was a conversation about American Thanksgiving – a national holiday celebrated by nearly everyone in the country.

“Jews celebrate Thanksgiving here?” I asked, and he confirmed that, yes, American Jews celebrate American Thanksgiving. I could not have anticipated how meaningful the holiday would become to me over time – and how thoroughly delicious melted marshmallows on sweet potatoes really are.

Rabbi Vaisberg: My first American Thanksgiving was during my first year of rabbinical school in Jerusalem, when my Texan roommate told me we were going to be hosting a kosher, dairy-based (and thus turkey-free!) meal – with many, many guests. I knew very little back then about American Thanksgiving, but I had a great time.

Since then, we’ve identified a number of reasons we initially were so perplexed.

For starters, although Thanksgiving is a holiday on the Canadian calendar – this year on Monday, October 12, the second Monday of the month, which also is Columbus Day – it is not celebrated with the same national gusto as its American counterpart. In part, this is because it doesn’t have the unique narrative of the pilgrims sitting down in friendship and bounty with the Native Americans that celebrates living well in diversity as much as it does the harvest. The first Canadian Thanksgiving, on the other hand, was simply about giving thanks – in the context of Protestant worship – for survival in the frozen wilderness. Since then, until it was established as a national day of gratitude in 1957, Thanksgiving services were held on ad hoc occasions during great moments of gratitude.

And then there’s the whole Jewish thing. The fact that Canada’s Jewish minority doesn’t really celebrate Thanksgiving only added to our confusion. Even though we’re into giving thanks as much our American neighbors, when it comes to celebrating diversity, Canadians showcase the festivals of others, and for celebrating thanksgiving, we Jews have Sukkot, our own feast of harvest gratitude.

We’ve often thought that perhaps Jews in Canada would celebrate Thanksgiving were it not for the timing. In the United States more than a month and a half separates Sukkot and Thanksgiving, but back home in the north, Thanksgiving is often back-to-back with Sukkot. Coming  off a week of eating together with family and giving thanks multiple times each day – on top of having just celebrated Rosh HaShanah and Yom Kippur – it’s not that we eschew Thanksgiving, we just need a break from food and family! And, as far as coming together as a nation – as Americans do on Thanksgiving – we have plenty of other occasions to celebrate our “Canadian-ness” with family, friends, BBQs, and fireworks – including Confederation Day on July 1st and Victoria Day weekend.

That said, as Canadian Jews living in the U.S., a break of nearly two months between our Thanksgiving and American Thanksgiving ensures that by the time the latter rolls around, we’ll be ready for another festive meal with family – and another opportunity to give thanks for good neighbors and ample food.

Cantor Marer: Though I’m Canadian through and through, I’ve established my own Thanksgiving tradition for my large American family. My husband and I host a Thanksgiving brunch that features stuffing casserole, turkey bacon, cranberry muffins, and more. Like families across the country, our day is filled with laughter, family, and that confusing sport you Americans play on a field instead of on ice!

Rabbi Vaisberg: I’m patiently waiting my turn to host Thanksgiving dinner for my new American family. As for the menu? I’m planning to brine and smoke a turkey or two, adding in a few side dishes… and a hockey puck for good measure.

Whichever holiday you’re celebrating this weekend, we two Canucks here in the south wish you a Shabbat shalom and a good time!