I'm a Jewish Teacher Who Will Never Carry a Gun 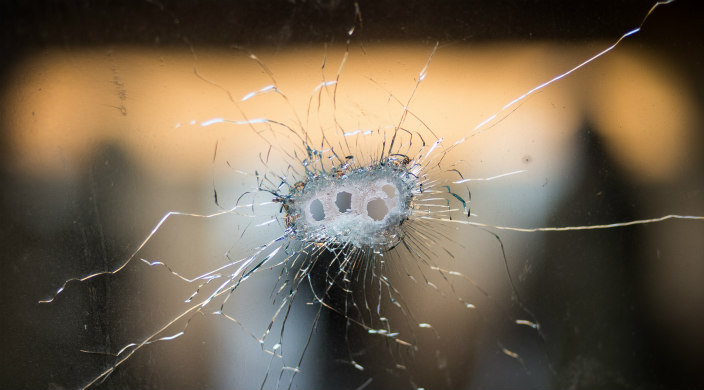 Look at the numbers. Our nation’s finest professional police forces, according to NYPD statistics, miss their intended targets 82% of the time. That’s correct, they strike the intended target with just 18 shots out of 100 fired. Exceptional professionals, who train constantly, are dedicated to their work and craft, and in the midst of a high-stress situation, they miss their intended “bad guy” 82 times out of every 100 shots.

That alone should tell the story. But let’s go on.

Who’s buying? Public schools, in many districts, lack the most basic necessities: paper, pencils, markers, glue, working copy machines, lab supplies. My state has 90,000 public school teachers; if 20% of them are supplied with weapons, it would run about $5.5 million dollars to equip them with S&W Bodyguard .380s. Do we apply to the NRA for grants? Do state congresses authorize a special sales tax for weapons, ammo, and training?

As a teacher, do I get paid extra for carrying a sidearm? Do I get paid for my training time? My regular training at the range? When I return fire and strike an innocent bystander student, am I shielded from lawsuit? Do I receive lifetime psychiatric care for murdering an innocent child?

When I get pulled over for rolling through a stop sign and a nervous rookie officer sees my weapon in my bookbag on the front seat and opens fire, who takes care of my family? Who replaces me in my wife’s life? My son’s? My students’?

If it’s dress-down Friday, and I’m in jeans and a flannel shirt the day our school is assaulted, suppose I walk into the hallway with my weapon drawn as I search out the shooter. When the SWAT team sees me, how can they tell I’m a good guy with a gun? Or do I become collateral damage in the battle for good and evil?

Let’s assume a teacher is wearing a sidearm while teaching a small group of students (you know, doing the job they’ve signed up and trained for). Say a disgruntled student overpowers the teacher, grabs the weapon, and shoots up the room. That’d be a bad day – and it will happen.

Perhaps the teacher is having a bad day. It happens. The class is noisy and uncontrolled, and the teacher, in frustration, fires his or her weapon into the ceiling to get everyone’s attention. It will happen.

Perhaps a teacher feels threatened by a student’s behavior. Angry students charge at teachers every week. What if that teacher “stands his ground” and that student, upset over a perceived injustice, ends up with a ragged hole in his chest? It will happen.

Two teachers become embroiled in a heated discussion, just as people in every job do. Do they shoot it out in the hallway? It will happen.

A parent-teacher meeting becomes nearly violent. (I’ve been in those.) A shooting ensues; a gun-wearing parent shoots at a teacher who returns fire, or a teacher takes aim at a parent. It will happen.

A teacher is called on the carpet by a principal. Tempers flare, and the principal is shot – or the teacher is shot by an equally livid principal. It will happen.

A seriously depressed teacher puts the barrel of his or her weapon in their mouth at lunch and sprays brain and blood all over faces of 600 hundred teens in the lunch room. It will happen.

I’m a Jewish high school teacher who teaches at a small Islamic day school. I’m certain that in some crazed fiend’s mind, we are already a target. He has planned this attack, sees it in his mind, and is waiting only for a little sign, a jolt to his reptilian brain, to try and spring his plan.

I love my students. We share our lives together: We share our foods, our thoughts about Adonai and Allah, Qu’ran and Torah. We are a part of each other lives. They teach me Arabic, and I teach them a little Hebrew or Yiddish. Nearly every day, I remind them to report anything that looks out of whack – a stray parked car, a stranger who seems uncomfortable on campus, a random text or comment on an Instagram post – to any adult in our building. I will do everything I can to protect them.

I’m also a teacher who has enjoyed shooting sports – but, no. I will never carry a weapon in a classroom.

Learn more about how NFTY is mobilizing for gun violence prevention, then sign up at the NFTY Fights for Gun Violence Prevention  to stay informed of breaking news about these efforts. You can also visit www.rac.org/gvp for tangible ways to take action to prevent gun violence.