It's a Leap Year! What's the Jewish Significance? 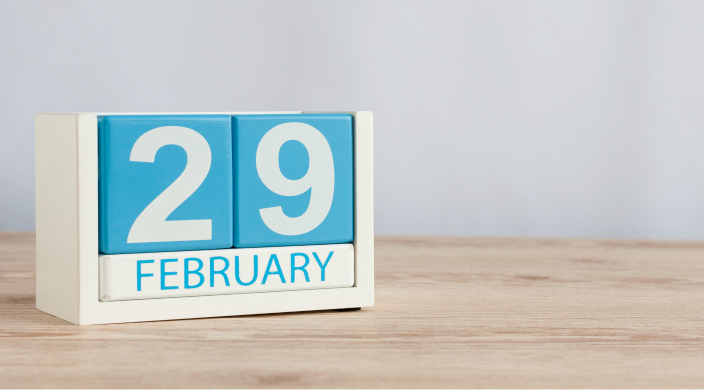 This year, there are five Saturdays in February, which can mean only one thing: 2020 is a leap year, and the 29th is Shabbat.

The concept of a leap year was devised to reconcile the complex movements of the sun and the moon with a calendar that would be convenient and easy-to-use. On our Gregorian calendar, a year contains 365 days. However, the earth revolves around the sun in 365 days plus about six hours – or, to be more exact, five hours and 49 minutes.

This discrepancy makes it necessary to add time to our calendar year. If we did not, within a short time, we’d be celebrating Independence Day in the dead of winter. An actual year is about six hours longer than 365 days, so if we add an extra 24 hours to our calendar every four years – an additional “leap day” in February – things should work out. And, for the most part, they do.

But why do we call a year with an extra day a “leap year?”

Adding a day to our calendar causes the dates of the calendar to “leap” by one day the next year. For example, if January 1 falls out on a Wednesday in any particular year, it will fall on a Thursday the following year. But in a “leap year,” January 1 “leaps” over Thursday, falling on Friday the following year, which is what’s happening this year: January 1, 2020, is a Wednesday, but January 1, 2021, is a Friday.

But many cultures, which depended upon an exact knowledge of the phases of the moon, not the sun, confronted this problem with a very different approach. Like the Chinese and the ancient Babylonians, the Jewish calendar includes an entire extra month to the calendar in a fixed system developed more than two millennia ago. Seven times in 19 years, we add a full month to our calendar – a “second Adar” in addition to “regular Adar.” This period of 19 years is known as a machzormachzorמַחְזוֹר"Cycle;" High Holiday prayerbook; plural: machzorim. , and, yes, it’s the same word (generally indicating a returning cycle) as the word for a High Holiday prayer book.

With all this information as background, let’s concentrate on this year’s leap day – February 29, 2020 – when we will read Parashat T’rumah. As we know, Moses did not remain on Mount Sinai for only a day, a week, or even a month, but for 40 days. What he received from God during that period of time was far more than the Ten Commandments.

The majority of what God revealed dealt not with “thou shalts” and “thou shalt nots,” but with the Tabernacle or mishkan – which is the focus of more than half of the five portions set atop Mount Sinai – Yitro, Mishpatim, T’rumah, T’tzaveh, and Ki Tisa. Indeed, most of the objects in our sanctuaries from ancient times until today can be traced to the magnificent architecture prescribed in T’rumah, including the ark, the bimahbimahבִּימָהThe platform in the synagogue from which which worship services are led and from which the Torah is read. The bimah, usually raised, can be placed in the front or the middle of the sanctuary. , and the menorahmenorahמְנוֹרָהSeven- or nine-branched candelabra; commonly refers to the nine-branched Hanukkah lamp; plural: menorot. .

In our sanctuaries and in our calendar, the Jewish people lives within the magical machzorim (cycles) of time and space. We leap from past to present to future – and back again. Renewing our days inspired by ancient precepts, we guarantee our future by establishing an olam va'ed (an eternity) in the present. How? By fulfilling the opening verse from this week’s parashahParashahפָּרָשָׁהTorah portion. The five books of the Torah are divided into 54 parashiyot or portions. Each week, Jewish communities read one parashah (singular of parashiyot); in this way, Jewish communities read the entire Torah over the course of a year.  Depending on the calendar, some weeks will feature a “double-portion.” The name of each portion is taken from the first few significant words of the portion; plural: parashiyot , v'yikhu li t’rumah – by offering gifts of pure intent from open hearts.

Cantor Marshall Portnoy is a member of the clergy team at Main Line Reform Temple in Wynnewood, PA.