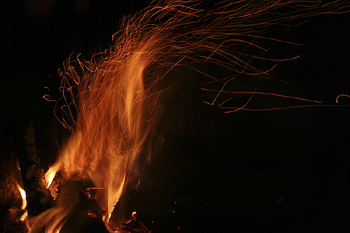 Lag BaOmer was completely off our radar when we lived in the United States. We never had any real exposure to it until we made Aliyah, and now its approach is easily recognizable by kids walking down the street, schlepping huge pieces of wood, old furniture, sticks, and anything else that burns. In a nutshell, Lag BaOmer, in modern Israeli culture, is a time of bonfires, baked potatoes, kids staying up all night, and lots of trash!

We didn’t feel badly that we weren’t able to explain why Lag BaOmer was celebrated; most Israelis probably cannot tell you either. Nonetheless, it is a holiday that cannot be missed! Lag BaOmer is actually the 33rd day (lamed-gimel) during the counting of the Omer between Pesach (leaving Egypt) and Shavuot (receiving the Torah at Mount Sinai.) The date is the 18th of Iyar. It reminds us that the redemption from slavery was not complete until we received the Torah.

Many Orthodox Jews consider the time between Pesach and Shavuot to be a time of mourning and do not attend weddings, listen to music, shave or get haircuts. They are solemn because during the time of Rabbi Akiva in the 2nd century, 24,000 of his students died of a plague. The plague was lifted on the 33rd day of the Omer, hence the celebration.

Here in Israel, it is traditional practice to have bonfires and parties and shoot bows and arrows, and 3-year-old boys experience their first haircuts. Where we live in Modi'in, there is a huge empty lot across from our house. The city plans show that a school will one day be built on this property. Until then, however, it remains one of the best spots in town (along with any other empty space) for a Lag BaOmer medura (bonfire). Last year, we lost count at 45 fires burning, surrounded by hundreds of people. Cars pull up on the empty lot in the afternoon and people claim their spot by depositing huge piles of debris. There is a day of respite for the bulk-trash employees since so much trash is reclaimed for burning! Later, the music blares, potatoes wrapped in foil roast on the open fires, people sit in folding chairs with banquet tables full of food, and by nightfall, the lot is ablaze with fires. Our first year here, we were so impressed to see the teenagers pushing physically challenged teens in wheelchairs so that they could participate. Everyone celebrates, regardless of their level of understanding of the history of the day!

When we wake up the next morning (feeling like we were the only people in Modiin who slept!) the smoke hangs in the air. We hesitate to open our trissim (electric outdoor blinds) and windows for a couple of hours. Around 6AM, the lot clears of the last very tired teenagers, leaving behind piles of ashes and of rubbish. By 7AM, the clean-up crew from the city is hard at work raking the property and by 10AM, there are huge piles of garbage waiting for 11AM pickup. Since school is typically cancelled for the day after Lag BaOmer, the streets echo only with the sound of the garbage trucks.

There is no other holiday like Lag BaOmer celebrated in Israel, or the USA, for that matter. If you find yourself in Israel over the holiday, be prepared to breathe a lot of smoke for about 12 hours but to experience a cultural celebration that is uniquely Israeli!

Micha’el and Nechama (formerly Michael and Nanci) Namal live in Modi’in, Israel, and are congregants at Kehillat YOZMA, the Reform congregation.

Micha’el and Nechama (formerly Michael and Nanci) Namal live in Modi’in, Israel, and are congregants at Kehillat YOZMA, the Reform congregation.