The Language of LGBTQ Pride in Israel 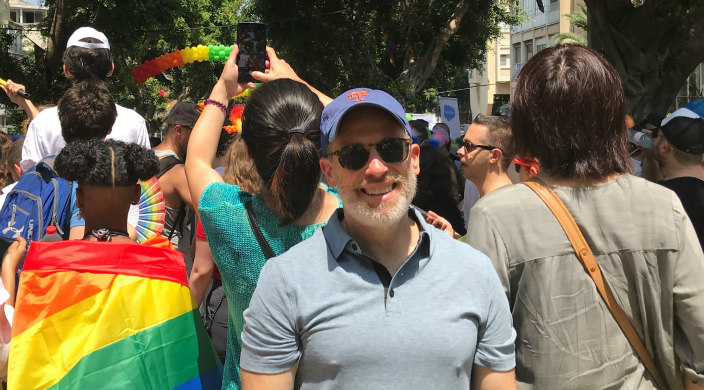 LGTQ Pride marches began as a way to continue the struggles and victories symbolized by the June 28, 1969 Stonewall Riots in New York City. Annually, on various dates mostly in June, LGBTQ communities organize events across cities in the U.S. and around the world.

Properly understood, Pride marches and the events surrounding them are, at their core, about bringing awareness to the work yet to be done to achieve full equality and rights for LGBTQ individuals. The celebratory aspects of Pride – which are colorful, loud, and often provocative – highlight individuals’ pride in being their true selves at public gatherings that offer safety in numbers – being among one’s own and with multitudes of supportive allies.

The biggest Pride march and event in Israel will happen in Tel Aviv two days from now. Jerusalem Pride was last week; other cities, including Haifa and Beer Sheva, will host gatherings as well. Although Tel Aviv has full municipal support, the annual Jerusalem March for Pride and Tolerance is harder to pull off. The Jerusalem Open House, with legal support from the Reform Movement’s Israel Religious Action Center (IRAC), annually has to navigate the political, religious, and social fault lines that are most present in Israel’s capital city.

To understand progress toward greater LGBTQ inclusion in Israel, there are a few things to know.

Legal advancement has been won by activists through the judicial system and not through legislation. Right-wing government leaders, who have been in power for over a decade, sometimes give lip service to gay rights, but in actuality will not risk losing their ultra-Orthodox coalition partners to enact new laws. The fact that LGBTQ Israelis can serve openly in the army or have their foreign marriages recognized as legal is the result of activism on the part of brave individuals and an array of non-profit organizations doing this important work. And, as in North America, popular support for LGBTQ inclusion is evident in all forms of media.

Although a lot is reported in the news about how traditional religious norms create challenges to LGBTQ rights, a lesser known topic for those who don’t read or speak Hebrew is language – because Hebrew, unlike English, is highly gendered. It’s not easy, for example, to use standard Hebrew in ways that are inclusive of women and those whose gender identity is non-binary.

Yona Wallach (1944 – 1985) – one of Israel’s most influential modern poets and known for her feminism and bisexuality – lays out this challenge in the first few lines of her poem, “Hebrew” (included in Let the Words: Selected Poems of Yona Wallach):

Later in the poem, Wallach refers a few times to how the general case in Hebrew is always the masculine: “in the plural the he’s have priority,” “Hebrew is a sex maniac, she wants to know who’s speaking,” “…the plural hides a woman, the way a crowd is masculine in gender…”

Progressive Israelis are creating a more inclusive Hebrew by combining masculine and feminine pronominal verb suffixes in writing and in speech. For example, instead of addressing a mixed group of gender identities as “chaverim” (friends) with the masculine plural ending -im attached to the male singular, chaver (friend), it is possible in Israel today to hear a greeting that combines -im with the feminine plural ending, -ot, forming the word chaverimot. There are many new re-combinations of gender suffixes for verbs and nouns in both written and spoken Hebrew.

A different linguistic challenge relates to the general word for “people” – “anashim,” which, strictly speaking, is the plural of “ish,” meaning man. Although “anashim” can be used to describe a mixed gathering, as Yona Wallach points out, it obscures the “nashim” (“women,” plural of ”ishah” ­– “woman”) in the group. In written forms, that problem is solved by writing a.nashim which might be like writing “wo.men” in English.

LGBTQ Pride in Israel and across the world is about showing tolerance for all people to express their own gender identities and sexual orientations. It is about changing the status quo, expressed in another poem in the collection Let the Words by Yona Wallach, “Identity Problems”:

Learn more about the Reform Jewish community's activism for LGBTQ equality in North America, headed by the Religious Action Center of Reform Judaism, by visiting rac.org/lgbt.