The Language of Music, the Power of Camp, and the Torah of Parenting 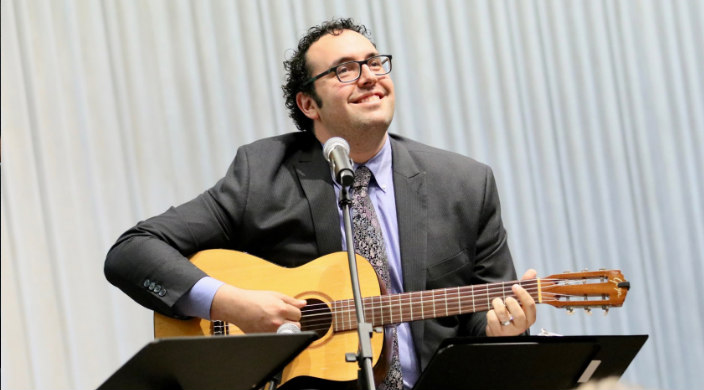 Meet Cantor David Berger, the cantor at Chicago’s KAM Isaiah Israel and ReformJudaism.org’s past Ten Minutes of Torah commentator for the Book of Leviticus.

Cantor Berger received his ordination from Hebrew Union College - Jewish Institute of Religion’s Debbie Friedman School of Sacred Music in 2007 and served as the first full-time cantor of Congregation Beit Simchat Torah, a predominantly LGBTQ+ congregation in New York City. He is the scholar in residence for the American Conference of Cantors and a featured soloist and faculty member at the North American Jewish Choral Festival.

We asked Cantor Berger about his Jewish journey and his approach to Torah study and music. To hear more from him, read on... and be sure to subscribe to the Monday edition of Ten Minutes of Torah for weekly Torah commentary delivered to your inbox each Monday morning.

ReformJudaism.org: What was it like growing up Jewish in the Chicago suburb of Buffalo Grove?

Cantor Berger: Buffalo Grove was so Jewish that our public high school offered Hebrew as a foreign language!

My parents joined the smallest of the six Reform temples in our neighborhood, and when you're a member of a small congregation, you are fully involved. I can't remember a time when my mom wasn't running the sisterhood or on the board, and my dad wasn't an usher or volunteering for something.

Both my sister and I were temple youth group presidents, and there was no question that we would be spending our summers at URJ Olin-Sang-Ruby Union Institute (OSRUI), the Reform Jewish summer camp in Oconomowoc, WI.

Your recent d’var Torah on Parashat Vayikra refers to your OSRUI experiences, as do some of your upcoming Torah commentaries. How impactful were those summers?

It was an environment where I could experiment with Jewish observance, tradition, belief, and identity in positive ways that allowed me to make Judaism my own.

At OSRUI, I developed a close attachment to the Hebrew language, which has become central to my identity as a person. I also thought about kashrut in different ways at camp, and now keep a kosher home.

When I was a young counselor, Rabbi Victor Appell arrived at camp with his husband and their kids. It made an impression on everyone because it marked the first time that an openly gay, married rabbi had come to the camp with his family – and for me, it was very impactful and personally empowering.

It reaffirmed that as a gay man, there was room for me in the Jewish world. And now, as a gay cantor married to a rabbi, with two kids, it means a lot to me to keep affirming that for future generations.

What led to your decision to become a cantor?

I did my undergrad work in religion and Jewish studies at the University of Illinois, Champaign-Urbana. While working on my MA degree in philosophy at the Jewish Theological Seminary (JTS) in New York, I was also teaching music at two synagogues and singing in three choirs.

I was torn between going for a PhD in medieval philosophy at NYU and applying to cantorial school. When I confided to my mentor, Matthew Lazar, conductor of the Zamir Chorale, how terribly conflicted I was, he said, “It's so obvious to everyone around you.”

Cantorial school it was!

Why attend HUC-JIR, the Reform seminary, and not JTS, the Conservative seminary where you did your masters?

At the time, JTS was not accepting openly gay students into clergy training programs, so that wouldn’t have worked for me. Also, I think HUC was more aligned with my expansive vision of synagogue music.

That vision encompasses musical styles from diverse eras and areas, from grand classic Reform liturgical compositions to the melodies of Moroccan piyyutim (liturgical poetry), which I first experienced when I taught English in a small Israeli town after college.

In your forthcoming commentary on the Torah reading for the Shabbat of Passover, you talk about Moses, who, in the aftermath of the Golden Calf incident, had the audacity to ask to see God face-to-face.

You then compare it to your son making demands after scribbling on the walls with permanent markers. How has being a parent informed your understanding of Torah?

God surprisingly grants Moses his request, with conditions: Moses is permitted to see God’s back, but not God’s face.

Though my patience is less than divine, and I am less inclined to say yes when my kids cause mischief, they know I will never stop loving them. When they come to me for a hug, I’m always there. God seems to work in the same way in relation to the “Children of Israel.”

This story invites us to imagine ourselves in both roles – as parents and as children.

As a parent, I know my kids will push boundaries; they have unique abilities to push all my buttons, but that comes from them knowing and loving me. I also know that my kids are growing and changing, so learning how to be the right parent they need now is hard.

God is working hard in this story to be a good “parent” to Moses and Israel. As kids, we most want to know, even when we know we’ve done wrong, that our parents still love us. Moses makes his outrageous request not despite the sin of the Golden Calf, but because of it.

In an address to the board of the ACC, you said, “My work centers on a single fundamental belief that music accesses parts of human beings that are otherwise unreachable.” How does music help us access the unreachable?

Our use of language conditions our way of thinking. People who grow up speaking different languages think in different ways.

I know this personally. When I spend time in Israel speaking Hebrew all day, I feel my mind working differently. The languages we speak are not only tools to express ourselves; they actually form pathways of thought and expression within us that are very difficult to change.

Music, at its best, can circumnavigate linguistic blocks, and push our brains and our spirits to explore new pathways of expression and understanding. Music has the ability to open us to the kind of experiences that transcend the realm of language. And that's exciting.

END_OF_DOCUMENT_TOKEN_TO_BE_REPLACED

In the beginning God created the heavens and the earth. The earth was unformed and void, and darkness was upon the face of the deep; and the spirit of God hovered over the face of the waters. God said: “Let there be light.” And there was light.
Standing with our Muslim Family
Image