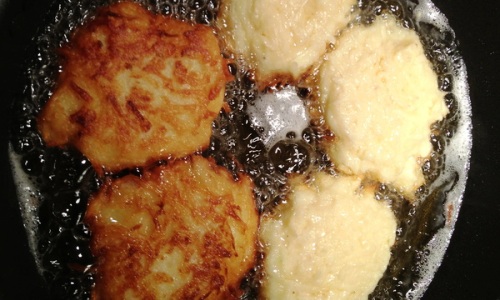 Pictured here are latkes I made for my family last year at Hanukkah. I find - somewhat absurdly - that I have strong opinions when it comes to latkes. Here are the latke principles for which I stand:

1) There is a popular translation of the Yiddish song, "Oy Hanukkah," that refers to "Crispy little latkes, tasty and thin." This, I say, is an affront to what latkes are meant to be. Once you have eaten a thick and hearty potato latke, you should know that you have eaten something. The sweet and salty flavor should linger in your mouth while the substance of the pancake amply fills your belly. To call a latke "little," or, even worse, "thin," is to deny the essence of what latkes are all about. "Crispy" on the outside is fine, as long as it is balanced by "plump" or "juicy" on the inside.

2) In the great contest that pits applesauce versus sour cream, I proudly affirm that they are both winners. The only thing that could be wrong about either topping would be to put on so much that you cannot taste the latke itself. A latke that is merely a substrate for sweet applesauce or tangy sour cream is not worth eating. The latke must have flavor that you would savor without any topping at all. The topping is just a bonus.

3) I recently discovered a third excellent topping for latkes. (I know, I'm breaking with tradition on this one. Call me a heretic.) When you mix together a cup of Greek yogurt, a pair of crushed garlic cloves, and a quarter teaspoon of salt, you get this fabulous sauce that is just crying out to be spread on top of fried potatoes and onions. Try it. It will elevate your latke experience.

4) Remember that the latke became a staple food of Hanukkah for one reason only - the oil. Eating a latke should vaguely remind you of the miracle of the oil that burned for eight days when it was supposed to burn for only one. (If the latke gives you heartburn, so much the better for remembering the burning lights of the ancient Temple Menorah). To create a latke-thing that is baked in an oven, or otherwise deprived of oil, is a sin against the memory of the Maccabees. Look, folks, Hanukkah is only for eight days. You can lower your HDLs and LDLs next month.

5) I've heard about latke/hamantaschen debates. Without casting any aspersions against the fine poppy-filled pastry of Purim, let me just say this: It's no contest. Eating a good latke is like receiving a glimpse of heaven. On Purim, I prefer the Slivovitz.

6) Texture makes a latke as much as flavor. A latke must not be made with potatoes that have all been irreparably reduced to mush. There needs to be bits of shredded (not grated) potato in the latke to give it the right feeling in your mouth. Run away from any potato ingredient that contains the words "reconstituted" or "powdered." Yuck.

7) Latkes are not deep-fried. Deep-frying is a technique for cooking food at high temperatures very quickly. If you do that to a latke, you will end up with something that is a lifeless, burnt, crumbly mess. Latkes are shallow fried. They cook slowly at lower temperatures while sitting in a puddle of oil. They are golden brown, savory and sweet. If you think you don't like latkes, it is because you've been eating the charred remains of perfectly good potatoes and onions.

8) Yes, I know about cheese latkes. I've read that they actually are the "original" latke. My wife makes incredible cheese latkes that are basically ricotta cheese fried in butter with a dollop of homemade rose hip jam on top. There is no part of the previous sentence that I do not like.

9) Of course, latkes are fattening. If you do not put on a few extra pounds during Hanukkah, you are not doing it right. Just don't eat from the last day of Hanukkah until Presidents Day and you'll be fine.

10) Any advice on what to do with leftover latkes is entirely missing the point.

Rabbi Jeff Goldwasser is the rabbi of Temple Sinai in Cranston, RI; he previously served Temple Beit HaYam in Stuart, FL. He blogs at Reb Jeff.