Lending My Voice to Women of the Wall 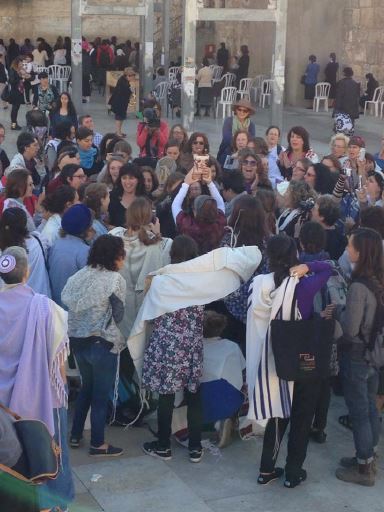 As a fall semester student in NFTY-EIE High School in Israel, I participated in a Rosh Chodesh service last month at the Kotel (Western Wall). Although no service at the Kotel is ordinary, by virtue of being at the Kotel, this one was especially unique: Our group of high schoolers was invited to pray with Nashot HaKotel, Women of the Wall, an organization that has spurred great controversy because it advocates the equal right of women to pray at the Wall.

We arrived very early in the morning. The boys in our group joined a small crowd of men nearly 20 feet behind the women’s section, peering at the women’s side of the Wall through a restrictive gate. We stood on chairs that were brought over to the men’s side of the wall to better view the 100 or so women, who were clumped together in the back of the women’s section at the Kotel. Most of them wore tallitot (prayer shawls), and some wore tefillin (phylacteries).

There was a lack of ruach (spirit) on the men’s side, so I sang as loudly and as enthusiastically as I could. Another male participant, perhaps seeking a suitable chazan (leader) for our group of men, swiftly passed me an earpiece so I could hear the voice of the woman directing the service directly in my ear. Suddenly, I found myself the lead singer of the men’s section, supporting these Jewish women as they exercised their religious freedom.

I began to notice some very loud religious women in front of us trying to overpower our singing. They were joined by a deafening chorus coming from the men’s side. Every time we started to sing, they began singing louder; it was evident their goal was to spite our group. Later in the service a very angry Haredi man shouted over the large divider at the women, chastising them for engaging in the joyous service. When I instinctively replied to him in kind, the man beside me quieted me and explained that it was our job to remain peaceful and calm. I had forgotten that I was representing the Women of the Wall, and I was ashamed that I had mirrored the Haredi man’s bad behavior.

As we prayed, a rumor began to spread amongst the men. I heard whispers.

“Do they really have one?” one man asked.

“No, it’s not a kosher scroll,” replied another.

The woman in my ear explained something about reading the Torah at the Western Wall for the first time. She asked all the women to gather around her, which I later realized was an effort to block the view of outsiders and hecklers who might react violently. I thought she meant that the Torah reader was a first-timer, but what she actually meant was that the women were preparing for the first time in modern history that any woman would read Torah at the Kotel. An historic day!

I listened to the Torah reading through my earpiece. When it was finished, a tiny Torah, lifted above the heads of the women, was proudly displayed to the whole world. We started singing the horah, and candy was playfully thrown at the girl who had been reading. Turns out, it was her bat mitzvah! Later we learned that the tiny Torah, the smallest kosher Torah in the world, had been smuggled into the women’s section in one of the women’s tallit bags—the guards confiscated a decoy full-sized Torah that the women tried to bring in.

When it registered that I had just witnessed the first bat mitzvah at the Western Wall – possibly the first since its construction, I was excited and proud, both of the Women of the Wall and of my friends who took part in that day’s events. I later learned in the women’s section, my female friends had been spit upon, told they were going to die, and otherwise harassed by women who disapproved of their actions. It made me realize how important Reform Judaism and k’hilah (community) are to the strengthening of Judaism as a whole.

Our determination to bring about equality and justice is essential in this pivotal moment during Israel’s growth as an egalitarian nation. Thus, the Kotel, the heart of Israel, should be the most nondiscriminatory, fair and righteous place in the entire world. After all, it is the closest spot to God.

Zachary Frieman is a junior at Solomon Schecter School of Westchester in Hartsdale, N.Y. He sings with HaZamir: The International Jewish High School Choir and is a member of Temple Beth Abraham in Tarrytown, N.Y.