Love Thy Neighbor: A Look at Interfaith Issues in Israel 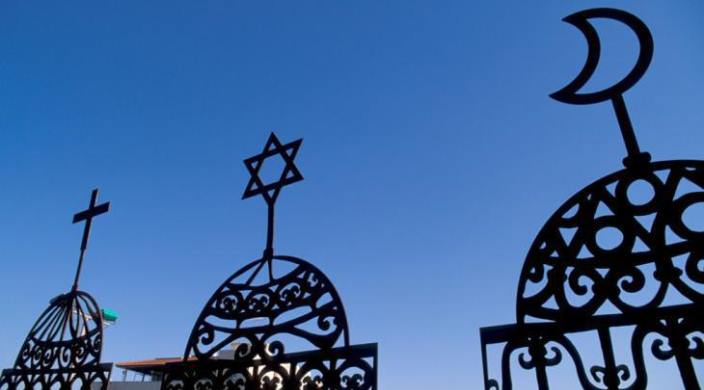 On the plane back from my year in Israel as part of my first year of rabbinical school, I had the privilege of sitting next to a man who had participated in a Christian mission trip in Israel. It was a pleasure sharing with him my journey that led me to rabbinical school, a conversation he might have never had before. I also got to enjoy a different perspective on seeing Israel for the first time, as I had no previous knowledge of how a Christian mission trip to Israel works. But before he said "God bless" and dozed off for the nine hour flight, he made a comment to me about how the Christians of America were cheering for us in our war against the Muslims, who are polluting the land with violence and treachery.

I could not help but feel serious confusion and discomfort with this statement. As Reform Jews, we believe in building stronger and more positive relations with members of other faiths. Especially in growing violent times, it is important that we work together to build a stronger future. Looking back on it, I cannot help but reflect on the eye-opening interfaith experiences during my past academic year in Israel, as well as on other trips.

As my class began the summer in Israel, we witnessed a war in the Gaza Strip, as well as increased violence Jerusalem. During the increased wave of violence, the Israel Defense Forces began limiting admission to the Temple Mount for prayer. Although this was supposed to be a protective measure, I saw it as only feeding the flames of the violence, as many Muslims felt threatened by being limited in their ability to practice their religion at one of its holiest sites.

Another interesting thing I saw had to deal with religious promotion in public areas of Jerusalem. On a night out at Ben Yehuda Street, I noticed many Chabad rabbis trying to get tourists and Israelis to come over to their tables to try on tefillin (phylacteries) and to recruit them. At the same time, I saw a Christian man handing out pamphlets and trying to start discussions with the same people. A policeman then came and told the man that what he was doing was illegal and that he could not continue to harass the patrons on the street. During this incident, many of the Chabad supporters at the tables began yelling for his immediate arrest.

Experiences like these in Israel made me think about my relationship to Zionism, and how much I support the Jewish State. I believe that it is important that it exists as a place for the Jewish people, and yet it makes me angrier that it perpetuates such a challenging environment for its non-Jewish residents. During my year in Israel, I made it my mission to not only prepare myself within my rabbinic studies, but explore as much as possible about other religions and religious communities as well. This was confirmed on my flight home as I saw the importance of understanding these issues when my seat neighbor displayed such ignorance about Muslim issues within the state.

Now back in the United States, and seeing continual anti-Muslim bigotry, I see the importance of bringing my experiences in Israel and talking about them with others so that we can have more constructive conversations and positive relations with members of other faiths. As is written in the Torah, we are told to “love thy neighbor” (Leviticus 19:18). As Reform Jews, it is critical that we take this phrase to teach the importance of learning about others and leaning to respect and not hate them.