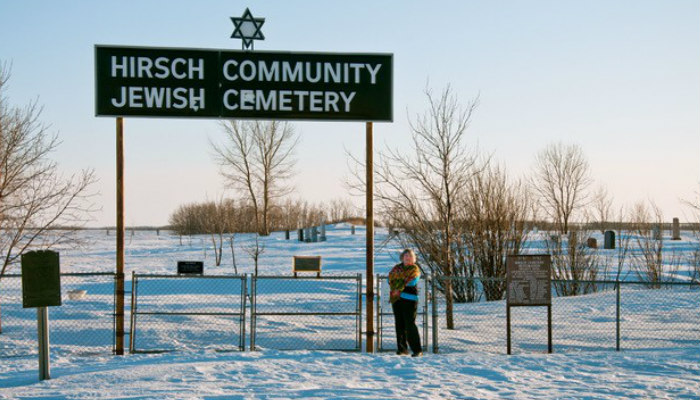 Mendel Hirt, the great-grandfather of my wife, Judy Baila Hirt-Manheimer, immigrated to Canada from Carpathia in 1899. My Life, his diary written in Yiddish, details his hard-knock life growing up in the old country and his struggle to make it as a farmer in a Baron de Hirsch colony in the Canadian prairie, near Estevan, Saskatchewan.

Baron Maurice de Hirsch (1831-1896), a German Jewish banker and philanthropist, financed the creation of agricultural settlements in Canada, Argentina, and Palestine to improve the lives of impoverished and persecuted Jews in Czarist Russia and elsewhere in Eastern Europe.

The following is adapted from a portion of Mendel’s diary, translated by Dr. Shieky Brownstone, who is Judy’s maternal uncle and lives in London, Ontario:

“We are travelling to Canada to be landowners. How fortunate we are. We will own our own fields, our own horses, our own cows and chickens, fresh milk, butter, sour cream, eggs. We will begin a new and happy life. We will not have to buy anything for money.

“On May 24, 1899, we set out by train and arrived at Myslowice [a city in southern Poland on the German border], where we switched trains. When we arrived in Hamburg, a Hirsch representative took us off the train and led us to a building with clean rooms, where we stayed overnight. The next day, I almost fainted at the sight of a whole herd of shabby, dirty, Jewish emigrants who were fenced off from us.

“One of them approached me and asked where we were going. I told him that in the afternoon we would be boarding a ship to Canada. He burst out laughing and said, ‘Just wait, and you will see what they will do with you. They will detain you, remove your last franc, and then transfer you here, as they did with us.’

“Soon a Hirsch committee representative came with wagons to take us and our baggage to the port. On board, our 10 families were provided with extra cabins so that we wouldn't have to mix with the other immigrants. We also received bottles of drink and delicious meats, salami, and other treats. We prepared ourselves a small banquet and celebrated.

“We arrived safely in Halifax and were greeted at the ship by a Hirsch committee representative who brought us to a hotel. With a five-hour wait for our train, we men went outside around to look around a bit at the new world. On the street, we encountered a couple of Jews who strongly advised us against going into the wilderness. They said we would not be able to withstand it. We did not want to listen to them. How could we 10 pioneer families betray the 175 families committed to settling on the land?

“We stayed overnight in Winnipeg and there again were advised by Jews we met not to travel further because it was a wilderness out there. We refused to listen and travelled on until we came to the designated place.”

Translator Shieky Bownstone then summarizes the rest of Mendel’s diary:

“Mendel was shocked to be told to detrain in an isolated spot – no station, nobody to greet them, and no building in sight – just open prairie. After a while, someone did appear and led the families to the location of the Hirsch colony. Mendel’s new house was missing a roof, windows, floors, and doors. He worked as a farm laborer until winter and then moved with his wife, Baila, and two sons into the town, supporting them by sawing logs for firewood. Eventually, someone corresponded on Mendel’s behalf with the offices of Baron de Hirsch in Paris, and he secured a land grant.

“By 1929, Mendel had a house on an enlarged farm with all the conveniences, a barn with cattle, a granary, and up-to-date machinery. But he was left in deep debt after four successive bad growing seasons and poor financial management advice primarily from the local managers of the Hirsch Jewish Colonization Association (JCA).”

At the end of an earlier translated version of his diary, Mendel bemoans the fact that the JCA is about to force him into foreclosure:

“For 30 years, I ripped out rocks and cleared the land, suffered in the winter from storms and frost, in the summer from heat and drought, grasshoppers, and other plagues. I thought that at last I could have some rest in our old age. But Baron de Hirsch's underlings want to destroy me, throw me off my land, steal it, and leave me and my wife without any support or means to go on living.”

Ultimately the colony failed. If there is a silver lining to this story, though, it is the contributions to Canada by Hirsch colony descendants. Among them is my wife Judy’s father, Dr. Norman Hirt, z”l, a noted Vancouver psychiatrist, born in Estevan, Saskatchewan. In the 1970s, his campaign to stop the abuse of Psychiatry in the Soviet Union against political prisoners led to the World Psychiatric Association condemning the USSR for this practice.

Judy says her uncle’s translation of Mendel’s diary gave her “a rare opportunity to bring a family legend into the realm of reality.”