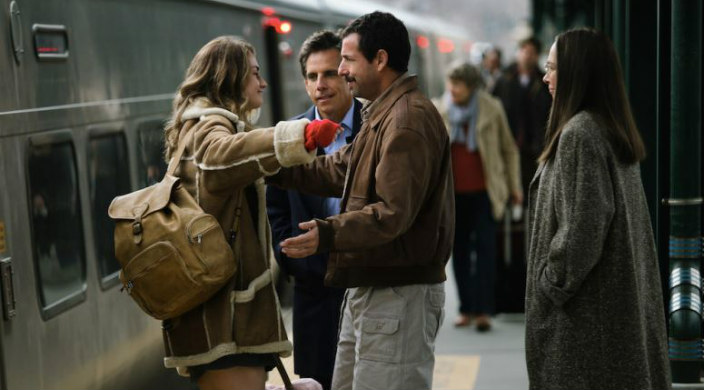 When Netflix premiered writer director Noah Baumbach’s The Meyerowitz Stories at Cannes this past May, the film received a well-deserved four-minute standing ovation.

The Meyerowitzes are a clan of East Coast Jews held together by their conflicted relationships with paterfamilias Harold, a minor artist and retired professor of sculpture, played to perfection by Dustin Hoffman. Harold has two children from his first marriage, Danny and Jean, played by Adam Sandler and Elizabeth Marvel, and a third child from a second marriage, Matthew, played by Ben Stiller, who reunites with his two half-siblings when Harold falls ill.

There are no obvious signifiers of Jewishness in this film, aside from one of Matthew’s coworkers wearing a yarmulke and a brief aside about another colleague named Ezra; still, the eponymous Meyerowitzs are obviously a very familiar kind of “Jew-ish" family. That is, they are the type of Jews who may not attend synagogue or mark the holidays but still identify culturally as Jewish.

“Jew-ish” in this film also subverts the stereotype of parents disappointed in their kids for not becoming doctors or lawyers. In this more contemporary depiction, the Jewish father can’t understand why his children aren’t more intellectually and artistically accomplished.

This kind of parental disappointment applies particularly to Stiller’s character, Matthew, a financial success but a major disappointment nonetheless due to his complete lack of artistic aptitude. To the rest of the family, Matthew is an enigma; none of them is quite able to comprehend what he does for a living, and they aren’t too interested, either. In contrast, Sandler’s Danny is a talented musician but a failure in career and love, and therefore equally disappointing. The two brothers share the same apprehension of their father, who sends them into spirals of frustration and fear.

The actresses in the film are cast in secondary roles as the wife (Emma Thompson), the daughter (Grace Van Patten), and the sister (Marvel), yet their performances are stellar. Candace Bergman appears in the briefest of scenes and manages to steal the spotlight, but this story is really all about the men and their daddy issues.

This is familiar territory for director Noah Baumbach, who last explored this theme in The Squid and the Whale, with Golden Globe-nominated Jeff Daniels playing another narcissistic father figure. But there’s something richer going on with Harold and his two adult sons, explored here with greater depth and nuance.

In some ways, the roles Sandler and Stiller inhabit here aren’t too far from the recognizable on-screen personas they have developed. Danny, especially, is right out of the Sandler playbook, a down-on-his-luck type who, though not worldly successful, is a capable family man. While  prone to angry outbursts, he remains endearing. These are character traits Sandler has evolved throughout the course of his career, but usually in broader, more family-friendly fare. In The Meyerowitz Stories, he gets to sink into his role in ways fans may remember from Punch Drunk Love, but with even greater humanity and pathos.

Stiller, too, is riffing on other roles, from Reality Bites to The Royal Tenenbaums, in which he plays a type-A, buttoned-up, emotionally closed individual. Here, though, we get to see that character’s facade fracture in ways that lead Stiller to do some of his best work ever, especially in a scene where a dedication speech at his father’s art opening slides gloriously off the rails.

Baumbach, whose father is Jewish, has said that he wrote both Stiller’s and Sandler’s parts with the two actors in mind. Both have complex relationships with Judaism: Stiller has made patrilineal descent part of a Saturday Night Live monologue and Sandler, traditionally muted about his Jewish background, has in recent years spoken out to defend Israel.

One has to wonder how much of Baumbach’s knowledge of the two actors on-screen personas and their real-life Jewish experiences rounded out their characters. Whatever the process, the result is a film that showcases the leads at the top of their game, with performances that certainly deserve awards consideration.