MLK Day: A Call for Jews to Fight for Racial Justice Today 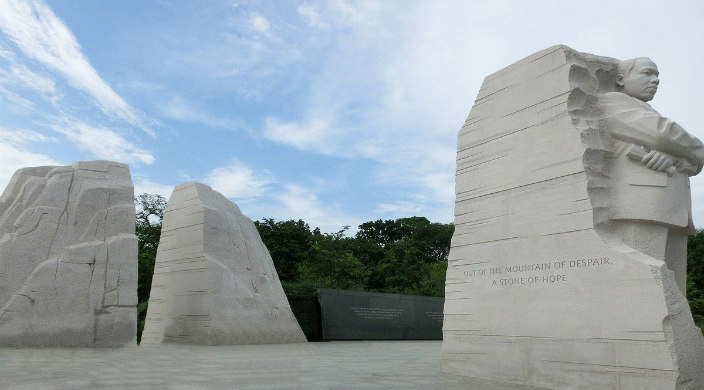 Every year come Martin Luther King, Jr. Day, Jewish organizations, synagogues, and schools look for ways to engage in Dr. King’s enduring call for a just and equitable society where the basic rights and dignity of all people are celebrated.

In trying to honor and understand the past, Jewish communal celebrations can often focus exclusively on the civil rights movement of the 1960s and an uncomplicated narrative of Jewish communal participation at that time. Rather than limit our gaze to the past, let us use the words and strategies of Dr. Martin Luther King, Jr. and other civil rights leaders to propel Jewish communal engagement in racial justice work today.

This year, let us use MLK Day to focus on the civil rights movement happening in the United States today.

“We are tied together in the single garment of destiny, caught in an inescapable network of mutuality. And whatever affects one directly affects all indirectly."

The question we need to ask ourselves as a Jewish community today is: How do we move forward examining those threads as Jews, as Americans, and as part of a multiracial and multiethnic Jewish community? Repair the World’s Act Now for Racial Justice campaign explores the many answers to this critical question.

Right now in the U.S., people of color fall victim to police brutality and violence at an alarming rate. In 2017, Black men made up 40% of the unarmed people who were shot and killed by police, though they only represent 6% of the overall population.

Right now in the U.S., immigrant families are being torn apart. From January 22 through September 29, 2017, Immigration and Customs Enforcement (ICE) arrested 41,318 people on civil immigration charges, almost 40% more than the previous year.

Right now in the U.S., Black and Latinx people are dying because of racial disparities in access to healthcare. An estimated 700 to 1,200 women die of childbirth or pregnancy complications every year; Black women are three to four times more likely to die from these issues than white women.

In the past two years, we’ve seen a rampant increase in hate crimes against immigrants, Jews, Muslims, black people, LGBTQ+ people, Latinx people, and people who hold other marginalized identities. King’s “inescapable network of mutuality” offers a critical path forward to address this proliferation of hate and violence. To truly live as a Jewish people committed to justice and racial equality, the iconic and beautiful images of Dr. King and Rabbi Abraham Joshua Heschel marching in Selma must inspire us as a Jewish community to actively work toward dismantling white supremacy and racism today.

This means using all the modes of social justice at our disposal, including volunteering, organizing, giving tzedakah (charity), advocating, and educating. It means using thousands of years of Jewish text, tradition, ritual, and values to guide the Jewish community in building relationships with communities across lines of difference that are rooted in accountability and trust. It means learning how to follow the leadership of people directly impacted by these issues, who know the intricacies of the injustices that they face, and therefore can identify the most thoughtful and powerful ways to address them. Lastly, it means making mistakes, getting back up, and doing it again.

This can be difficult. And complex. And it often feels like “too much” work for one person, or one synagogue, or one organization to tackle.

Repair the World’s Act Now for Racial Justice campaign offers a critical entry point through service and education. The discussion guides and service learning resources that Repair the World created for MLK Day give communities tangible first steps to engage in meaningful discussion about racial justice through a Jewish lens.

Take a look at Repair the World’s resources below, which you can download and print to share with your community this MLK Day. We suggest using the resources together with Repair’s Racial Justice Glossary, Guide to Respectful Conversations, and Next Steps.

Erika Davis is a blogger, writer and Jewish Diversity activist living in the Pacific Northwest, where she works as an independent birth worker and co-director of the Puget Sound’s only nonprofit social justice yoga studio, Samdhana Karana Yoga. She is a former board member of the Jewish Multiracial Network and an active volunteer for JMN in the Tacoma-Seattle area. She is an urban farmer with a vegetable garden, six chickens, and a healthy obsession with growing poppies, peonies, roses, and wildflowers.

Rebecca Katz is the director of education at Repair the World. After living in Chicago and Austin, she’s happy to put roots down in Brooklyn, N.Y., just three blocks away from where she grew up. As she hibernates from the cold, she draws comics for Lilith Magazine.