A Mother’s Day Wish: An Interview with My 97-Year-Old Mother 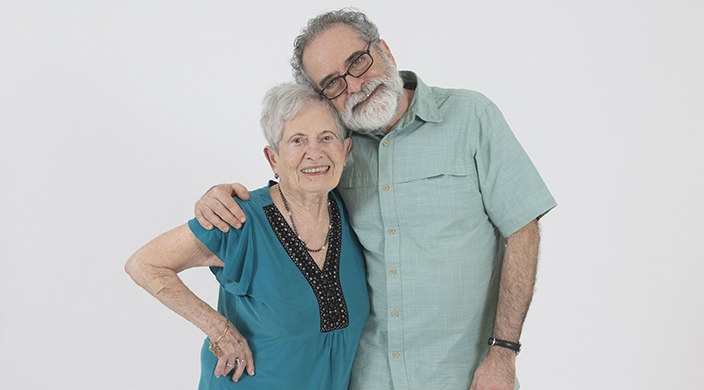 Last year I interviewed my mother, Adela, a Holocaust survivor, and gained so many valuable insights that I decided to do a follow-up. For anyone who may regret not having asked their mother about lingering questions, what better time for such a conversation than Mother’s Day?

ReformJudaism.org: Ma, why do you celebrate two birthdays every year?

I am really celebrating two miracles. I was born in 1921 in Poland to parents who had lost a son and daughter in an epidemic 10 years earlier. My parents brought me to the rebbe (rabbi) and asked him what they could do to keep me alive. He prescribed a number of methods to fool the Angel of Death, including naming me “Alta,” which means “old one” in Yiddish. And here I am 97 years later.

My second birthday is the day I celebrate my liberation from a Nazi death march. On May 5, 1945, I was among 20 other women, too weak to continue the march, who were being driven to a forest where we would be killed. Suddenly, an American fighter plane appeared overhead and shot at the truck. A German women guard sitting right next to me was hit, and in the confusion I escaped into the woods. I was reborn.

What kept you going after the liberation?

My only thought was keeping alive your very sick father, who was in a sanitarium. We had been engaged before the war and reunited six years later in a displaced person camp in the U.S. occupied zone of Germany. We were married there, and you were born a year later. You are a miracle too.

We came to America in 1951, when you were three, and your sister was born two years later. I was the breadwinner and my biggest concern was that your father could breathe. My mind was not on raising you and Rose. You raised yourself and your sister.

In our previous interview, you said that you never considered not telling me and Rose about the Holocaust because “it would have been a lie.” Did you think this knowledge might have been emotionally harmful to us?

I thought your knowing what happened in Europe would make you better appreciate what was truly important in life. I believed it would make you stronger, able to overcome hardship, and be successful adults. I wasn’t wrong.

Are you ever able to block the Holocaust out of your mind?

No. Every time I sit down to eat, I think of how desperately hungry I was from 1941-45. What they fed us was barely enough to keep us alive. A small piece of a beet or cabbage, or a potato peel was like a gourmet meal today.

Do you feel you have a special responsibility to bear witness to the Holocaust?

Yes. I am worried that when the last witness is no longer alive, the Holocaust will be forgotten. That’s why whenever someone asks to hear my story – a filmmaker, a reporter, an author, a student – I make myself available.

I especially love to speak to students at UCLA Hillel, because they are so appreciative. One of them, a young woman from Iran named Ariella, sent me a note that I treasure. She wrote:

Thank you for sharing with us your infinite knowledge and wisdom. Your beautiful smile ignited within each of us a flame and, in doing so, you gave us each the responsibility and honor of being witness to your experiences and sharing your story and the stories of the many, like you, who, despite all they faced, continue to make this world a better place – each and every day. We will be eternally grateful.

How do you feel about becoming a celebrity at this stage in your life?

I don’t know why people are giving me so much credit. I’m just another survivor, trying to survive another day.

Don’t you think you deserve some credit?

I have to admit that I like all this attention. At the same time, I keep asking myself, “What do these people see in me that’s so special?” If I knew the answer to that question, maybe I would take some credit.

What is your Mother’s Day wish for yourself and for the world?

For myself – good health, so I can be good to others. For the world – peace, not war. No bad person wins in the end. What did Hitler achieve?

END_OF_DOCUMENT_TOKEN_TO_BE_REPLACED

The COVID-19 pandemic has shifted so much of how we engage Jewishly, but Shavuot is a fantastic holiday for families to celebrate from the safety of their homes. Here are a few ways you and your family can observe this rich, festive Jewish holiday this year.
d’var Torah
Image