The Mystery of the Fifth Cup: Why Elijah? 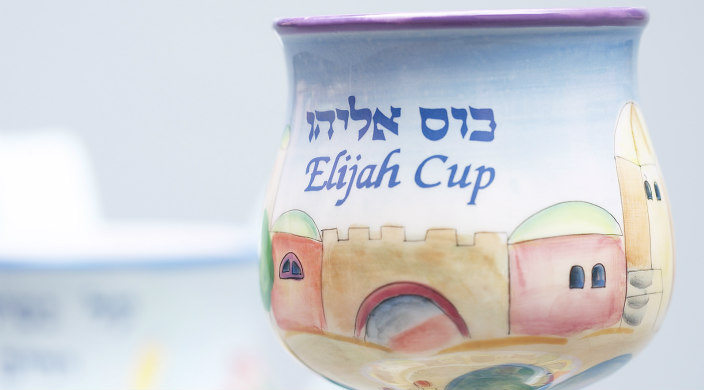 Rabbi Simeon J. Maslin, former president of the Central Conference of American Rabbis and author of several books on Jewish practices, reveals why, of all our biblical luminaries, it is Elijah who visits our homes on Passover, and why we welcome the prophet to our seder table with his own dedicated cup of wine.

ReformJudaism.org: What do we know about Elijah the prophet from our sacred literature?

Rabbi Simeon J. Maslin: Elijah is introduced to us in chapter 17 of the book of I Kings as a Tishbite, Gileadite, and prophet – but his prophetic status differs from that of Isaiah and the other literary prophets, whose oracles became books of the Bible. Elijah left no writings, but he nevertheless occupies a major role in Jewish tradition and folklore as defender of the Jewish people and as the one who will herald the coming of the messiah.

How did Elijah become associated with the coming of the messiah?

Malachi prophesies that at the end of days, “I will send the prophet Elijah to you before the awesome, fearful day of Adonai” (Malachi 3:23). Why Elijah? Because he was thought to be immortal, having ascended to heaven on a fiery chariot with fiery horses in a whirlwind. Elijah could therefore be sent back to earth by God at the end time and deliver a hopeful message that would inspire the people to return to God and avoid utter destruction.

Did Elijah play a role in easing the lives of people?

Jewish folklore from the Talmudic era down to modern times needed a character who might intercede for the powerless and bring comfort through all the centuries of Jewish persecution and wandering. In response to this need, the legend of the oft-appearing, usually-incognito Elijah emerged.

How did Elijah become associated with the fifth cup of wine at the Passover seder?

It began back in the second century, when the sages were establishing the rituals of the Passover seder. A disagreement arose as to whether there should be four cups of wine or five. The custom of drinking multiple cups of wine was derived from God’s promises to the enslaved Israelites four promises follow one another in rapid succession: “I will free you,” “I will deliver you,” “I will redeem you,” and “I will take you to be my people.” Then, after an intervening verse, a fifth promise appears: “I will bring you into the land….” (Exodus 6:6-7).

The question arose: Is the fifth promise connected to the prior four, or is it a separate promise? The rabbis could not agree on this. Some said there should be four cups in honor of four promises; others said five cups for five promises.

How did the rabbis finally resolve this question of four cups or five?

The Talmud uses the Aramaic word “teku” to indicate that the rabbis could not reach a decision on a matter under discussion. The decision regarding the correct number of cups was left teku. The writers of the Passover haggadah (book used at seders), however, offered a solution. They prescribed four cups for us to drink – possibly a parallel to the four questions and the four sons – but, just in case there really should be five cups of wine, they called for an additional symbolic cup.

How did this symbolic fifth cup come to be known as “the cup of Elijah”?

Ah, that takes us back to that word teku. While nobody is certain of the word’s exact derivation, a folk etymology has it that teku is an acronym for “Tishbi yetaretz kushiot v-abayot,” “the Tishbite (i.e., Elijah) will answer all unresolved questions.” According to this belief, the first thing Elijah will do after he returns to the Jewish people to proclaim the advent of the messianic age is to resolve all those questions of Jewish law that confounded the rabbis.

In later folk literature, Elijah would appear seemingly out of nowhere and often disguised to come to the rescue of Jewish communities under threat, foiling the wicked plots against them.

Jews continue to venerate this immortal and ubiquitous prophet – at meals, at the end of Shabbat, at circumcisions, and, most famously, at our Passover seders.