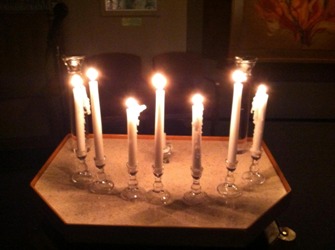 Seven candles are lit on the candle table on the bimah at our congregation on Yom HaShoah, the day of Holocaust Remembrance for victims and heroes of that challenging and tragic time in human history.

At last year’s memorial program, congregants watched a short film about rescuers of Jews who had no question in their mind that any action they took to save Jews from the Nazis was the right choice. The rescuers saw in those they sought to save fellow human beings who had been denied their humanity by a diabolical evil. These chasdei umot haolam, “righteous among the nations,” courageously opposed that evil and its associated acts of cruelty with no fear for their own safety. Those who were hidden and protected likely saw in the eyes and sensed in the hearts of their helpers that there was still a spark of human decency left in the world. Perhaps they felt that even a spark was enough to thwart any plans for the total elimination of Jews and the continued murder of other targeted groups of people designated for death because of who they were or what they believed.

In his address on Yom Hashoah last year, Israeli president Shimon Peres offered these sobering thoughts about the past and the present:

“I am proud to be an arch enemy to the Nazi evil. I am proud of our ancestors' legacy being absolutely opposed to racism. I am proud of our belief that there is no one human being superior to another. There is no superior race, only deep roots. I am certain that this is how our children and grandchildren will be brought up; as the Kaddish is on their lips, ‘Love your neighbor as yourself’ is in their hearts.

My friends, a million and a half Israeli citizens are not Jewish. We are obligated to make sure that none of them are ever discriminated because of their nationality or religion. This is the essence of the existence of the State of Israel. Israel is a defense shield, a safe haven and a great spirit. Had the State of Israel existed during those days, I am convinced that things would have been different.

We have paid a high price but we have not lost faith. We have gathered unusual capacities which emerged from the depths of the Holocaust and from the peaks of our legacy. We have a commitment towards the betterment of the world and respect for humanity.”

President Peres echoed the ideals of Israel’s Declaration of independence in his address. There was no threat, no demonization, only a call for human decency that Israeli leaders and citizens can and should realize in their legislation and in their actions towards each other.

Let us recall how the first President of our nation, George Washington, responded to the Jewish community of Newport, Rhode Island in 1790, setting a foundation for how diversity and respect can work in the United States of America:

“All possess alike liberty of conscience and immunities of citizenship. It is now no more that toleration is spoken of, as if it was by the indulgence of one class of people, that another enjoyed the exercise of their inherent natural rights. For happily the government of the United States, which gives to bigotry no sanction, to persecution no assistance, requires only that they who live under its protection should demean themselves as good citizens, in giving it on all occasions their effectual support.”

Washington concluded his letter by wishing that all Americans would “continue to merit and enjoy the good will of the other inhabitants, while every one shall sit in safety under his own vine and fig tree, and there shall be none to make him afraid."

The first president of our nation and the current president of Israel share a vision – most certainly an ideal that is not always realized, but one that can continue to serve as a goal and a beacon if we truly desire to live in freedom. May we know, soon in our day, mutual respect, understanding, and peace. 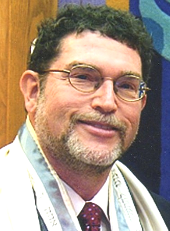