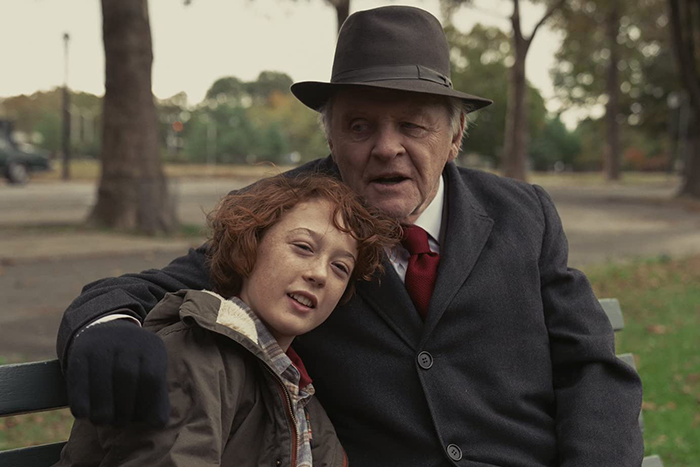 Two films from acclaimed Jewish filmmakers have debuted during award season this year, each taking semi-autobiographical looks at troubled childhoods. The first, "Armageddon Time," from writer-director James Gray ( Ad Astra, Two Lovers) had the unfortunate luck of premiering just a few weeks ahead of industry titan Steven Spielberg's own self-mythologizing origin story, "The Fabelmans." Each picture delivers award-worthy performances from many well-known actors, including Anthony Hopkins and Michelle Williams as sure bets to score Oscar nominations.

Though rare, it's not unusual for two films with such similar themes and subject matter to come out at the same time. The classic examples are "Armageddon " and "Deep Impact," two asteroid-will-hit-Earth action flicks that duked it out in 1998, or the dueling rom-coms "No Strings Attached" and "Friends with Benefits" that came out in 2011.

" Armageddon Time" takes us back to the early '80s in Queens, New York, where white Ashkenazi Jewish-American kid, Paul Graff (Banks Repeta) is just beginning junior high. Paul quickly befriends Johnny (Jaylin Webb), a black schoolmate who is also marginalized for being the "other." The two share disdain for their teacher and public school in general. Paul's parents, Ester (Anne Hathaway) and Irving (Jeremy Strong) are distressed at Paul's lackluster performance in school and fret that he won't live up to his potential. Only his kind grandpa, Aaron (Anthony Hopkins), encourages Paul to pursue his true calling in the arts.

" The Fabelmans" follows a young Spielberg avatar named Sammy (Mateo Zoryon Francis-DeFord) who, after seeing the train wreck in Cecil B. DeMille's "The Greatest Show on Earth," becomes obsessed with filming his toy trains recreating the climatic crash. The family moves west to Arizona, where adolescent Sammy (now played by Gabriel LaBelle) continues to make movies, a pastime that's begrudgingly tolerated by his father, Burt (Paul Dano), but enthusiastically supported by his free-spirit mother, Mitzi, (Michelle Williams). His parents' differences over his filmmaking foreshadow the deeper rifts in their marriage that will only worsen after they move to California.

Though drastically different in style and tone, both films examine the tensions young people face when they are inextricably drawn to the arts. In Spielberg's film, these ideas are presented on a platter by Sammy's great uncle Boris (Judd Hirsch), a circus-hand who found carny life to be too antisemitic, so he moved to Hollywood. Boris tells Sammy, "Family, art - it will tear you apart." In Boris' world, you may love both family and art, but committing to one means leaving the other behind. For Gray's Paul, art is already loneliness; his talent is completely ignored by everyone except his grandpa.

Both fathers refer to their sons' creative activities as hobbies. Whetherit's the '60s or the '80s, it doesn't matter; art is not a real job. Practicalities matter. Paul's father is a plumber with a violent streak who wants his son to do better than him. The Jewish immigrant journey informs much of Paul's story, from his great-grandmother fleeing murder by the Cossacks, to his grandfather coming to America and doing well enough to send Paul to private school. Aaron even predicts that Paul will go farther than him due to his anglicized last name, Graff, compared to Aaron's own surname, Rabinowitz.

Spielberg's Sammy is largely spared antisemitism until the family relocates to California. There, Sammy is mocked and bullied, called "bagelman," and accused of killing Christ. His first girlfriend thinks Jesus is "hot" and implores Sam to let Christ into his heart just before kissing him. Both young men endure their otherness in submissive silence; that is, until Sam creates a film for senior prom exposing his tormentors, and Paul turns his back on the establishment.

Each of these young men have an artistic champion, someone who really sees them for who they are and encourages them to keep at it. For Sam, it's his mother, a talented concert pianist who chose family and suffered what she views as domestic captivity. Paul's grandfather, Aaron, gives him a set of pastel crayons like the real artists use, encouraging him to "never give in."

These artistic light-bringers feature the most magnetic performances in each film. Williams is absolutely mesmerizing as a tragic woman who never followed her own passions. Hopkin's Aaron is a feisty fighter, determined to bring his family from persecution to the promised land, but not at the expense of his grandson's soul.

Fans of Spielberg's work will recognize many self-knowing winks at his film oeuvre in "The Fabelmans." In one particularly harrowing scene, Sammy's mother drives headlong toward a tornado, reminding us of the car chase in "Jurassic Park." His boy scouts riding their bicycles straight down main street is reminiscent of both "E.T." and "Indiana Jones and The Last Crusade." And Sam's bully is so cleanly cut from Aryan cloth- tall, blonde, and blue-eyed. His resemblance to the Nazi commander in "Raiders of the Lost Ark" is undeniable.

While Spielberg's film has his signature emotional scene work and immaculate composition, there is a raw quality to the proceedings that feels a bit less like the rest of his work. Gray, on the other hand, executes his story extremely unsentimentally. Reagan and Fred Trump figure prominently, along with the racial animus of the time, as seen with Paul's friend, Johnny. Spielberg takes a timeless approach, with barely a mention of current events. One film wants us to see how society helps mold a child; the other is strictly family business.

In the end, both of these films are animated by family. Each depicts childhoods spent in the shadow of unstable parents -- people navigating career pressures and the need to set realistic goals for their children. Both boys are dreamers. Outsiders from the start due to their Jewish heritage, they've found the one thing that helps them cope. "Armageddon Time" and "The Fabelmans " both suggest that the cost of pragmatism is much steeper than self-denial.