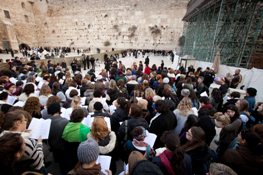 The past year has seen an increase in tension - and even violence - at the Kotel or Western Wall, one of Judaism's holiest sites. Last Friday, progressive Jews worldwide were disturbed to learn of protests and near-rioting as the Women of the Wall came to pray for Rosh Chodesh at the Kotel.

On one hand, it is encouraging that the municipal and district court in Israel both recently ruled that nothing should bar women from praying out loud and wearing a tallit (prayer shawl) or tefillin (phylacteries) at the wall. On the other hand, it was deeply disturbing to see some ultra-Orthodox Jews so distraught about this ruling that they felt compelled to scream, spit, blow whistles, and throw rocks at other Jews as they prayed. We progressive Jews may have won a battle, but at what cost?

One of the things that make Judaism so interesting and engaging is how connected modern-day life is to our history - and it is the Torah connects us. The Western Wall, this locus of rancor, is a retaining wall, erected under King Herod around 19BCE as a means of expanding the building area in order to make the Second Temple grander and in keeping with other temples of the time. This Wednesday, we'll celebrate the holiday of Shavuot, when we celebrate the receiving of the Torah at Mount Sinai, and in this week's Torah portion, Naso ("Lift Up," Numbers 4:21-7:89), we read about the dedication of the Mishkan, or Tabernacle, the tent that held the tablets as we traveled in the desert. Some of these same passages in Numbers are also read during Hanukkah, when we focus on the re-dedication of the Temple, the permanent dwelling place of the tablets. This brings us back to modern times and the remnants of what once held the Temple - the Kotel.

Part of what seems to upset our co-religionists so much is their view that the act of women praying "like men" is a perversion, a "making crooked" of the Torah. If we look at this week's Torah portion, though, we see that women's prayer is not only not a perversion but actually the way it's supposed to be. In Exodus 19:7-8, Moses brings a message from God to the people Israel. The Torah then tells us, "All the people answered as one, saying, 'All that Adonai has spoken, we will do!'" It does not say that only the men answered; it says "all the people" answered. As the reading continues, it teaches that all the people stood at Mount Sinai, all the people heard, saw, and experienced the revelation, and all of the people agreed to the covenant with God.

This week's Torah portion, Parashah Naso, is a very long portion with many themes, all connected to the Mishkan. The focus is on its dedication, service there, and protection of the sanctity of the community in the desert to maintain the people's ability to provide for the Divine Presence. Throughout the portion, it is clear that the actions of both men and women matter to the sanctity of the camp. For example:

Women, like men, stood at Sinai to receive the Torah. If women can make sacrifices, and if prayer is a substitute for sacrifices post-Temple, then clearly, women cannot be excluded from prayer. If women can dedicate themselves to God the same as men, then clearly women must be able to pray the same way, too. If anything, the way we pray - out loud - was started by a woman, Hannah. Hannah, who was childless, went to a Shiloh sanctuary, where she wept and prayed for a son (I Samuel 1:1-28). A priest in the sanctuary had never seen anyone pray like Hannah did, and he accuses Hannah of being drunk. Her prayers were answered when she became mother to Samuel, a nazir from birth due to Hannah's vow.

Liberal Jews believe that both men and women can and should be able to access all forms of prayer and service. Increasingly, we see a growth in this belief among the modern Orthodox, as well, evidenced by the recent graduation of the first class of Jewish women given the title of maharat (short for Manhiga Hilchatit Ruchanit Toranit, leader in Jewish law, spirituality and Torah) and the growth of congregations that have a mechizta (partition) but allow women to serve as prayer leaders and Torah readers. Though the ultra-Orthodox, unfortunately, have a very different perspective, it's vital that we provide for the sanctity of prayer at the Kotel and allow all people to pray.

Natan Sharansky's proposed compromise - which will create an extension of the Kotel to the whole western face of the Wall and create two equally sized prayer areas - is the best solution. Last week's violence at the wall demonstrates the urgent need for change - and now is the time to focus on making it happen. Contact ARZA, the Association of Reform Zionists of America, if you want to help.

Barbara Kavadias is the acting executive director of ARZA, the Association of Reform Zionists of America. 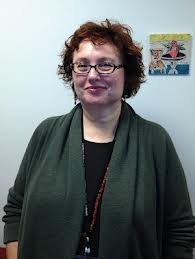 Barbara Kavadias has professional and volunteer experience with numerous organizations devoted to making the world a better place. Among them are ARZA, Religious Coalition for Reproductive Choice, and NCJW. The mother of two grown children, she is looking for her next great adventure.