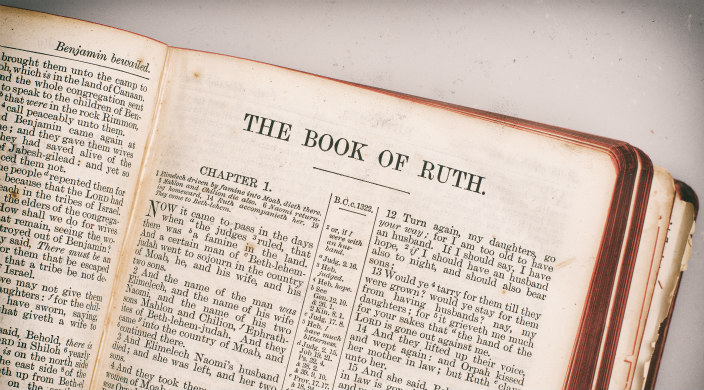 Every year as Shavuot approaches, I think about my mother. That’s because her name was Ruth -- just like the book we Jews read on Shavuot.

On Shavuot, Mom used to make turos palacsinta, cottage cheese crepes. (Mom was a proud Hungarian Jew, not a Yiddish speaker, so she never called them blintzes.) As a kid, I hated cottage cheese, and, although the pancake part was good, I picked out every single golden raisin, since raisins were for eating separately and without a cheesy coating.

When I was little, she once took an art class and came home with an oddly shaped piece of dark wood that smelled of chemicals and was covered in square mosaic tiles. Most of these were a garish shade of orange. I hated the color orange. And I hated Mom’s art project.

It depicted Mom herself as the biblical Ruth. In one of her hands, she wielded a scythe and in the other she clutched a sheaf of wheat. Her bare feet were showing beneath her long garment.

Mom called the piece “Ruth Gleaning.” I thought that Gleaning was a last name until Mom told me the story of Ruth, a poor Moabite woman whose husband died young. Ruth decided on something I didn’t understand when I was a kid. She stuck by her widowed, old Israelite mother-in-law, Naomi, even though she could have returned to her own family of origin. The story seemed sappy to me. Almost as icky as the Ruth quote Mom cited: “Entreat me not to leave thee, and to return from following after thee; for whither thou goest, I will go; and where thou lodgest, I will lodge; thy people shall be my people, and thy God my God…” I didn’t understand how the two women, Ruth and Naomi, could decide to be a family on their own.

I’m in my late 60s now and ashamed that I hated Mom’s mosaic. It also embarrasses me to think that I found the Book of Ruth to be overly sentimental. I know that love between a young woman and an old woman is a wonder and that families don’t always look like the ones depicted in our first-grade primers. (I’m remembering Father, Mother, Dick, Jane, Sally, and Spot.)

I’ve learned a lot since the “Midge Maisel” baby boom years. I’ve learned that “family” has a broader definition today than it did in the 60s. I’ve found that kids like me, who start out hating their mother’s art, can turn to painting in watercolor. I also know how hard it is to write about love because I’m trying my hand at that now, during this year’s Omer counting, as we tick off the days after Passover.

So as Shavuot, our week and wheat holiday gets closer, I remember my mother, Ruth, her palacsinta, her orange tile art pieces, and her recitation from memory about love between women.

Cantor Barbara J. Ostfeld, the Reform Movement’s first ordained woman cantor, served the American Conference of Cantors in numerous roles, including as its placement director. She is the author of the new memoir, Catbird: The Ballad of Barbi Prim, and her essays have appeared in The Reform Jewish Quarterly, The Lilith Blog, and New Jewish Feminism.