See, Count, and Interpret: The Three Hands of Rosh Chodesh 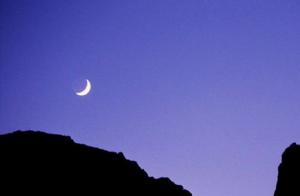 Rosh Chodesh, like many things in Judaism, has three hands.

On one hand, Rosh Chodesh is a simple acknowledgement of the visible stuff of the cosmos. As we know from Genesis Chapter 1–or just by looking out the window-we have the sun to shine by day, the moon and stars by night,1 and the moon can be seen to wax and wane. Every four weeks (plus a little), it completely hides in shadow and then reemerges as a faint sliver in the west just at sunset.

According to the Mishnah, in the days when the Temple still stood, witnesses of that first sliver would journey to Jerusalem to testify before the Sanhedrin that the new moon had appeared.2 The Sanhedrin would then spread the news, using a trail of beacon fires from hill to hill that all could see, from Jerusalem all the way to Babylonia.3 That way, even those who had not witnessed the new moon themselves could see the signals that marked it. That is, we arrive at Rosh Chodesh by seeing and by declaring what we have seen.

This is the Rosh Chodesh of our senses, the "head of the month" that we observe using our sight.

On the second hand, Rosh Chodesh is a calculation tool for marking off the Jewish calendar. We declare that each new moon marks the start of a new "month" (chodesh), 12 or 13 of which make a year.4 To each chodesh we give a name: Nisan, Iyar, Sivan, and so on.

To figure out when Shabbat comes each week, we count to seven, over and over, to perpetuity; there is no physical thing in the universe that marks it. But to calculate our months and holidays, we see when the new moon appears and we count forward: ten days from the new moon of start of the month we call Tishrei (a.k.a. Rosh Hashanah) until Yom Kippur; 15 days from the Rosh Chodesh of the month we call Nisan until Pesach; 50 days on past Pesach to Shavuot, and so on. Pesach, Sukkot, and Purim all fall on the fifteenth day after their respective months' new moons, i.e. on the full moons of those months. That is, we arrive at our holidays by seeing and declaring, and then by counting from what we have declared.

In the time of the Temple, these counted occasions were marked by special observances: "And on your joyous occasions," we read, "your fixed festivals and new moon days–you shall sound the trumpets over your burnt offerings and your sacrifices of well-being" (Num. 10:10). The Book of Numbers (Chapters 28-29) details the sacrifices and other observances for each of these days, the new moon days and the festivals we arrive at by counting from them: the holy days we came to call Rosh Chodesh, Pesach, Shavuot, Rosh Hashanah, Yom Kippur, and Sukkot. The heavens provide the new moons, and we provide the calculations and rituals that go with them. Through our rituals, we mark time throughout the year; we give names to things that we create in partnership with God's physical world around us.

This is the Rosh Chodesh that allows us to go beyond our physical sense of sight and to count and calculate; to create order and ritual in the world.

On the third hand, Rosh Chodesh is a mechanism through which we create shared meaning. Our festivals are not meant to be marked alone. Judaism honors individual spirituality and personal relationships with God, but it thrives when we come together, engaging in the same rituals at the same time, imbuing them with the narratives and interpretations we tell each other about them. Through the stories we tell each other about our shared symbols, we change those symbols and ourselves and even our understanding of God:

Rabbi Shimon ben Pazzi pointed out a contradiction [in the account of the creation of the sun and moon]. One verse says, God made the two great lights (Gen. 1:16), and immediately the verse continues, The greater light... and the lesser light. The moon said unto the Holy One, blessed be He, "Sovereign of the Universe! Is it possible for two kings to wear one crown?" God answered, "Go then and make yourself smaller." "Sovereign of the Universe!" cried the moon. "Because I have suggested that which is proper must I then make myself smaller?" God replied, "Go, and you will rule by day and by night." "But what is the value of this?" cried the moon. "Of what use is a lamp in broad daylight?" God replied, "Go. By you, Israel shall reckon the days and the years." "But it is impossible," said the moon, "to do without the sun for the reckoning of the seasons, as it is written, They shall serve as signs for the set times-the days and the years' (Gen. 1:14)." "Go. The righteous shall be named after you [i.e. they shall be named 'the Small' after the moon], as we find, Jacob the Small (see Amos 7:2), Samuel the Small (a first century rabbi), David the Small (see I Samuel 17:4). On seeing that it would not be consoled, the Holy One, Blessed be He, said, "Bring an atonement for Me making the moon smaller." This is what was meant by Rabbi Shimon ben Lakish when he declared, "Why is it written specifically about the male goat offered on the new moon, Unto the Lord (Num. 28:15)? Because the Holy One, Blessed be He, said, 'Let this male goat be an atonement for Me for making the moon smaller.'"

According to the Mishnah,5 in the time of the Second Temple, another ancient people, the Samaritans, counted months differently than the Jews and lit their beacon fires not according to the observable new moon but strictly by counting sets of 30 days. Their signal fires confused the Jews (possibly deliberately), interfering with the shared practice that they strove to create. Not to be deterred, the Jews sent messengers instead. They continued to mark the days and holidays together, from Jerusalem to Babylonia, offering blessings and sharing in the same stories.

Na'aseh v'nishmah: We do. and then we tell stories and interpret. We engage together to find the holy:

Said Rabbi Aha bar Hanina in the name of Rabbi Asi in the name of Rabbi Yohanan: Reciting the blessing over the moon at the proper time is like greeting the Shekhinah personally...It was taught in the school of Rabbi Ishmael: If the Israelites were privileged to greet their Father in heaven once a month, that would be enough for them. Said Abaye: Therefore we should say the blessing standing up (as though greeting God). Meremar and Mar Zutra went so far as to climb up on one another's shoulders while saying the blessing.6

This is the Rosh Chodesh of our third hand, the Rosh Chodesh that allows us to go beyond our physical senses and our ordering of the world around us and to see what is holy in the world, in each other, and in God.

Rabbi Jordana Schuster Battis serves as the Pedagogic Coach to the faculty of Mayim: The Elementary Learning Community at Temple Beth Shalom of Needham, MA, and as the rabbi of Temple Shir Hadash in Westford, MA. She lives in Natick, with her husband, Seth, and their fifteen-month-old son, Gershom. 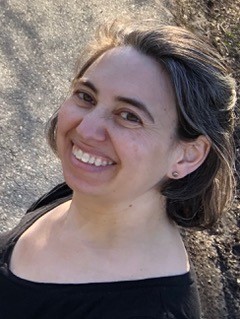 Rabbi Jordana Schuster Battis is the associate rabbi of Temple Isaiah in Lexington, MA. Previously, she served as associate rabbi of Temple Shir Tikva in Wayland, MA, and rabbi-educator of Temple Beth Shalom of Needham, MA. She is an alumna of Williams College and Harvard Divinity School, in addition to rabbinic and education degrees from Hebrew Union College-Jewish Institute of Religion. She is happy to talk Torah, YA literature, cultural change, poetry, theology, and other life quandaries with equal enthusiasm.