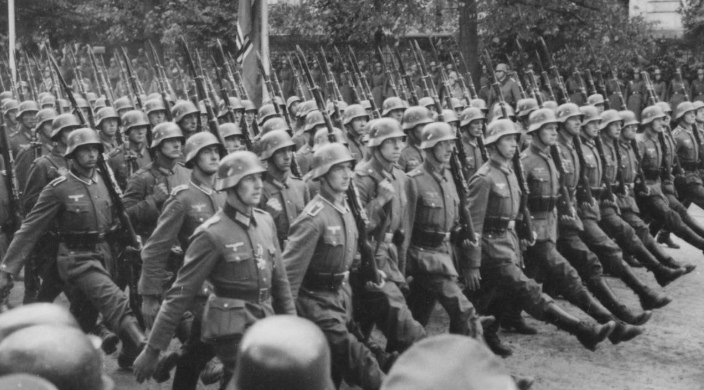 Eighty years ago, on September 1, 1939, Adolf Hitler, the Nazi German “Fuhrer,” began World War II by invading Poland. He hurled 1.5 million troops, 2,000 tanks, and 1,900 warplanes against his neighbor on the east. The outnumbered and outgunned Polish army was no match for the Nazi assault.

The Polish capital, Warsaw, fell on September 17, and 11 days later, Soviet troops linked up with Hitler’s military juggernaut and divided Poland as part of the Berlin-Moscow non-aggression treaty signed a month earlier.

It was a bitter defeat, but for Poland’s 3.5 million Jews, 10 percent of the country’s population, it marked the beginning of the end of an extraordinary community which dated back more than 1,000 years.

It was because of Poland’s huge Jewish population that the engineers of the “Final Solution” built their largest death camps, including Auschwitz-Birkenau and Treblinka, inside occupied Poland. And once Hitler invaded his former “ally,” the Soviet Union, in June 1941, even more Jews came under his brutal control.

In the United States, the outbreak of war in Europe further polarized an already divided America. Virulent anti-immigrant sentiments increased. European refugees, most of whom were Jewish, were perceived by many Americans as threats to an unemployed workforce battered by the Great Depression that had begun ten years earlier.

The anti-Semitic aviator hero Charles Lindbergh was the public face of a deep-rooted isolationist movement. On September 11, 1941, he delivered a speech in Des Moines, IA, titled “Who Are the War Agitators?”

Lindbergh answered his rhetorical question by pointing to three groups who were  “pressing this country toward war…the British, the Jewish [community] and the Roosevelt Administration.”

At the time, the American Jewish community contained a large number of newcomers to the U.S. who were not sure-footed in challenging their adversaries and insecure in confronting the political leadership of the nation.

Those tasks were primarily entrusted to Rabbi Stephen S. Wise, the acknowledged leader of the American Jewish community of that era. Between 1933 and 1945, Wise had 13 face-to-face meetings with his political idol, President Franklin D. Roosevelt. The famous rabbi urged FDR to take actions to save Jews from Hitler’s grasp.

But even after the German invasion of Poland, FDR refused to break open the highly restrictive quota system and immigration limitations that existed in 1939. Nor did the president vigorously oppose the restrictive British “White Paper” of the same year that prevented mass Jewish emigration to Mandatory Palestine.

FDR has been rightly criticized for not issuing executive orders that could have saved tens of thousands of beleaguered European Jews. Tragically, the Nazi vise greatly tightened after September 1, 1939.

Because of widespread anti-Semitism in America, the president and the rabbi were careful in the late 1930s, and particularly after September 1939, to make certain that America’s efforts to prepare for war were not viewed as supporting a uniquely “Jewish war” against Hitler.

In the two years between Hitler’s invasion and Pearl Harbor, FDR and Wise agreed on one key point: the nation’s need to safeguard democracy, freedom and liberty. Such measures included the first peacetime military draft, the lend-lease agreement that provided aid to Britain, and other policies to prepare the nation for war.

The Japanese attacked Pearl Harbor on December 7, 1941. Roosevelt called it a “day of infamy” that brought America into the war, and a few days later, Hitler declared war on the U.S. Those events publicly sidelined the anti-Semitic isolationists.

Saving Jews in Europe was never a major priority of either the United States or Britain during the war. Jewish leaders in both countries were constantly told the best way to save Jewish lives was defeating Germany as quickly as possible. However, by time of Germany’s surrender, six million Jews had died – more than half from Poland.

We do not need to establish another day to commemorate the unspeakable losses the Jewish people suffered: Yom HaShoah and International Holocaust Remembrance Day are annual reminders of the terror of those horrific years. But it is surely worth remembering another day of infamy – September 1, 1939 – the day that set in motion the destruction of six million Jews.

That date is a grim reminder of a wondrous Jewish world that would soon be no more.