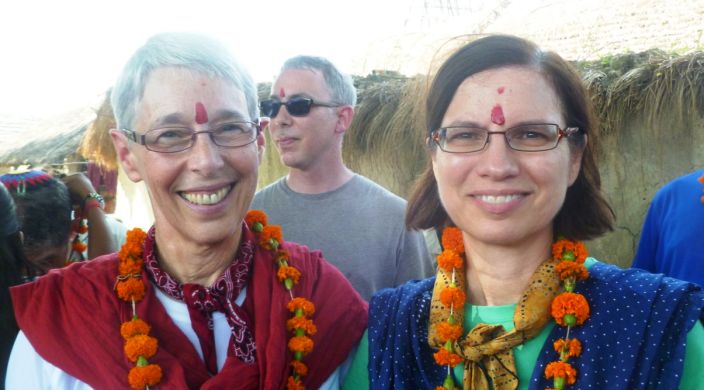 Most rabbis spend the summer months preparing for the High Holydays. This summer, my High Holiday preparation included travelling to Lucknow, India, with 16 rabbis representing Orthodox, Conservative, Reform, Reconstructionist, and Renewal Jewish communities across America. Together we became the fourth rabbinic delegation of the American Jewish World Service (AJWS) to immerse in a “service learning” approach to increasing global justice. We traveled to the largest democracy in the world, a country that became an independent state in 1947, just one year before Israel. We were also fortunate to be joined on our trip by URJ Faculty member Ruth Messinger, the president of AJWS.

We readied for our trip for six months by studying texts on development, international human rights, and responsible travelling. In chevruta, study pairs, we explored the Indian caste system (which was outlawed in 1950 but, like pernicious American racism, persists), the growing middle class, and gender inequality and discrimination across the spectrum of caste and class. We also reviewed necessary preparations for the trip: securing a visa, visiting medical specialists, packing modest, light clothes. In late July, we gathered in a hotel near Newark airport to finally meet one another. Everyone’s luggage contained work shoes, hats, scarves, sunscreen, DEET insect repellent, and water bottles.

We began with song, setting a pattern of sharing harmonies that nourished us throughout our 11 days together. We then dived into an activity beloved by rabbis: text study. Our text for the morning was the AJWS mission statement: “Inspired by the Jewish commitment to justice, American Jewish World Service works to realize human rights and end poverty in the developing world.” How would our few days working in a remote Indian village increase justice and contribute to ending poverty?

Hours later, we assembled at the gate for our flight to Brussels, to be followed by flights to Mumbai, Delhi, and Lucknow. One of the AJWS staff members who joined us on the trip, Adina Mermelstein Konikoff, encouraged us to choose a method for “counting off. ” With aspirational chutzpah, we settled on the first lines of Arik Einstein’s song, “Ani v’Ata: You and I Will Change the World.”

After 30 hours of traveling, we arrived at SSK, a multi-faceted NGO that offers leadership training and education for regional residents. Our days began with a breakfast of strong chai, chapatis, lentils, and warm yogurt, and then we boarded a bus to the village of Bikharipurwa. The 25-minute drive was an adventure; the roads were clogged with automobiles, auto-rickshaws, open and closed trucks, and bicycles, scooters, and motorcycles. Vehicles and pedestrians were joined by cows and water buffalo wandering in and out of traffic, herds of goats, and an occasional pig. The honking, braying, and snorting created a cacophonous highway symphony.

On our first morning in the village, we were welcomed with songs and ritual. The village children presented each of us with a garland of marigolds, dabbed henna on our foreheads, and wrapped our right wrists with red thread. I felt the powerful connection to the millions of souls throughout history who have worn protective amulets. I am still wearing my bracelet of protection.

On each of our days in the village, we joined the master mason and his crew in the village schoolyard. Over the course of our week together, under their guidance, we laid a brick patio and created new floors in one of the three classroom buildings and in the tiny kitchen area where village women prepared government sponsored lunches. We also built and paved a drainage area around the school’s water pump. For most of us, pumping and carrying water, laying brick, sifting sand and mixing cement were new experiences, and we were grateful for the direction and the patience of the experienced village crew. All of us are teachers, but none had ever had a hand in building a school. We were privileged to invest our modest sweat equity into this rural school and in the children of Bikharipurwa. On our last day, we delighted in sharing songs and an impromptu recitation of the hokey pokey with the kids who had, day after day, peeked through the school windows and around the doors at these odd, sweaty foreigners who labored with little grace but with determination and high spirits.

I returned to Philadelphia on the day before Rosh Chodesh Elul. The next morning, I slipped into morning minyan and sang these words from Psalm 118: “Min hametzar, karati Yah. Anani v’merchav Yah: From a narrow place, I called out to God, who answered me with spaciousness.” I thought of my 16 rabbinic colleagues with whom I had worked, studied, and prayed. Together, we transformed a narrow space and created an expansive patio for children’s play. Our labor renewed my commitment to work Marge Piercy calls “common as mud.”

But God’s deeper answer to me increased my sense of the possible, expanding my sense of both family and obligation. Our trip to the Global South reminded me that borders are human creations; we traveled many miles to meet sisters, brothers, friends with whom we share a destiny. Together, you and I, ani v’ata, can create a more spacious, just, and compassionate world. Brick by brick, song by song, our efforts can make a difference. God welcomed me to this new year with a clear challenge: to find ways to extend the generosity and passion that was shared with me – and to invite you to join me in this urgent work.