Shavuot: Counting Up to the Celebration 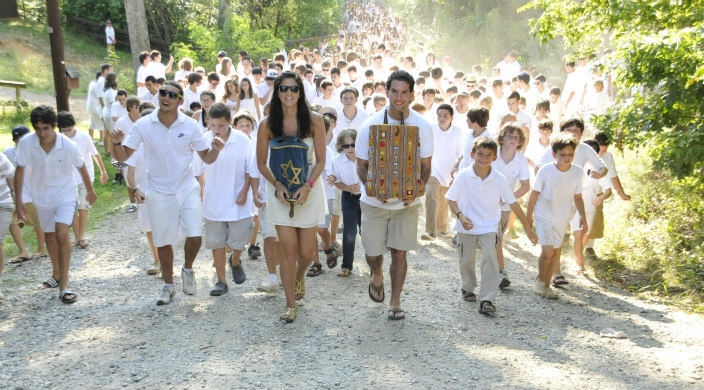 Riding home from school in the car the other day, my youngest daughter excitedly exclaimed, “Mom! We counted today that there are only seven weeks of school left. If there are five days each school week, and seven times five equals 35, that means there are only 35 days left of school!”

Every year, when my kids have this realization, it stops me in my tracks and I get a sinking feeling in the pit of my stomach. Chaos is coming, I think, as the countdown to the end of school begins. The ball drop in Times Square on New Year’s Eve is another big countdown – and likely the most well-known one of all. For some reason, despite the promise of a new year, I often feel a bit of sadness at this countdown, perhaps because counting down can represent a desire to make time pass more quickly, even though once it’s gone it can never be regained.

When the kids begin to count down to the end of school, I notice that they, like me, also express a sense of sadness. The end of the school year represents a change in what they have come to know and expect in their daily lives. My oldest daughter is moving into middle school next year, creating a sense of sadness about leaving elementary school behind. Although summertime will bring visits with family and friends, new experiences, and swimming lessons, there still is a sense of sadness in the counting down that will lead to this transition.

In contrast, counting up has an entirely different connotation.

Recently while leading t’filah (prayer) for some of our Hebrew school students, I guided them in reciting the blessing over Counting of the Omer. We discussed how we count up from the second night of Passover all the way to Shavuot – a total of 49 days – which symbolically covers the period from our Exodus out of Egypt until we received the Torah at Mt Sinai.

One student shared a “lightbulb moment” when he realized we do the exact same thing for Hanukkah.  Indeed, there is a classic debate about whether we should add one candle every night to increase our joy and light, a position espoused by Rabbi Hillel, which ultimately won out over the suggestion of Rabbi Shammai that we should start with eight candles and remove one on each consecutive evening. According to Rabbi Hillel, “Maalin bakodesh, veein moridin,” which means holiness should only increase and not decrease.

Increasing our holiness is the tradition we adhere to in our celebrations today. Just as the light grows as Hanukkah continues, so too do our joy and excitement grow as we count the Omer for 49 days on the way to Shavuot.

Counting up toward an event is something I can relate to in a personal way, too. My birthday falls on January 12th and every year as January 1st hits, it is a natural practice for me to count up toward my birthday, adding numbers and excitement as each day passes. (Part of this excitement stems from the great birthday traditions in our family, including multiple signs around the house, balloons, special meals, and long-term planning of parties and gifts.)

As our Jewish community counts up toward receiving the ultimate gift of the Torah in just a few weeks, we’re also planning the rituals and routines of Shavuot: participating in late-night Torah study sessions that include cheesecake, ice cream, and other dairy foods to remind us of the land of milk and honey; reading the Ten Commandments as part of the festival worship service; and, in some congregations, celebrating confirmation and honoring those students who have continued their religious education beyond b’nai mitzvah.

This year, Shavuot begins at sundown on Saturday, May 19. Check out these Shavuot family activities to help young children connect Torah to the holiday.

Stacey Delcau, RJE, is the director of education at Temple De Hirsch Sinai in Seattle, WA. She is a graduate of the Rhea Hirsch School of Education at Hebrew Union College-Jewish Institute of Religion in Los Angeles, CA. Having grown up and worked in the Denver, CO, community for many years, she is a frequent contributor to the Mazeltogether blog, which is based in Colorado.