The Shoah: My Filter for Understanding What It Means to Be a Jew 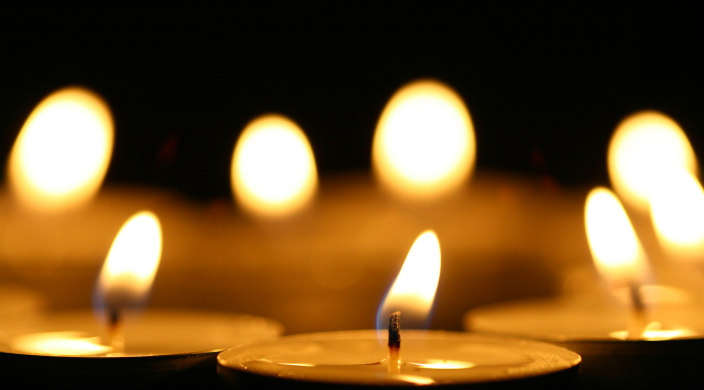 I was born in America 15 years after the Shoah to a mother and father born in America, whose parents were born in America. My great-grandparents immigrated to the U.S. well before the 1920’s quotas that restricted Jewish immigration from central and eastern Europe. I never heard any family stories about family left behind to suffer at the evil hands of the Nazis. But I knew of great-uncles who served in the U.S. army during World War II.

In a collection of old photographs in my mother’s apartment, there is a family picture of relatives sitting around a Brooklyn kitchen table welcoming uniformed Uncle Davey back from the war.  My favorite photo in that same pile is of my teenage mother, my grandmother, my great-aunt, and a woman I don’t recognize – dressed in uniforms doing volunteer work on behalf of the war effort.

No, I was not in that number, though I still have the fire and the smoke
within me, pillars of fire and pillars of smoke that guide me
by night and by day. I still have inside me the mad search
for emergency exits, for soft places, for the nakedness
of the land, for the escape into weakness and hope,
I still have within me the lust to search for living water…

Stories and images of the Holocaust entered my personal, Jewish historical consciousness as I learned to be a Jew outside the home: in Hebrew school, in youth group, and through lots of reading as a teenager. A recent experience visiting Berlin, especially at the Jewish Museum there, helped me reflect on how much the Shoah is such a dominant filter for my understanding of what it means to be a Jew, even when I am not fully acknowledging it.

The Berlin Jewish Museum complex is two buildings: an old building – a former Baroque palace – and a new building attached to the old – designed by the famous architect Daniel Liebeskind.  The new building houses the permanent exhibit – a history of Jews in Germany from ancient times through today’s Jewish revival, which is shaped by the influx of new “German” Jews, mainly from the former Soviet Union and young Jews from Israel. There is no entrance directly into the new building. Liebeskind’s design does not permit a visitor to begin the tour of the permanent exhibit, which starts during Roman times, without passing through a symbolic and artistic dialogue with the Shoah. As though I was having such a dialogue is just how I felt while walking the streets of Berlin, where “stumbling stones” in the pavement across this modern city mark the houses where Holocaust victims once lived. Indeed, the systematic extermination of six million Jews is, and must be, a consequential part of today’s Jewish story: always as backstory and pushed to the foreground when appropriate or needed.

Yom HaShoah (which begins at sundown this Sunday, April 23, and ends at sundown on Monday, April 24) cannot be the only day that we as Jews place Holocaust remembrance into the foreground of Jewish identification. All year long, the worldwide Jewish community has obligations to care for the remaining survivors who may still need communal support. And, every day when more than 13 million Jews, living mostly in the Western world and Israel, enjoy so much freedom, they should see themselves as doing so in defiance of the murdered six million and their missing progeny, who never had the chance to exist.

Because the Shoah story is just as much about perpetrators as it is about victims, Shoah as foreground is a 21st century obligation to end all forms of oppression. Here the unique story of anti-Semitism combines with other uniquely horrible crimes against humanity resulting from racism, sexism, homophobia, and ethnic nationalism.

The State of Israel, because it is the only Jewish state, can mark Yom HaShoah in the most public and visible ways. One of the most pervasively felt markers is the siren that goes off at 10 a.m. – traffic stops on highways, pedestrians stand still on streets, workplaces pause. While this two-minute siren is a call to silence, other sirens we know are calls to action, alerts to impending emergency, or signals to make way for rescuers. This Yom HaShoah I’d like to imagine the 10 a.m. siren heard as an alarm around the world, stirring all humanity toward the pursuit of justice.

I believe with perfect faith that at this very moment
millions of human beings are standing at crossroads
and intersections, in jungles and deserts,
showing each other where to turn, what the right way is,
which direction…

Yehuda Amichai, excerpted from “I Wasn’t One of the Six Million: And What is My Life Span?” from Open Closed Open, trans. by Chana Bloch and Chana Kronfeld.