Sukkot in Jerusalem: A Precarious Balance 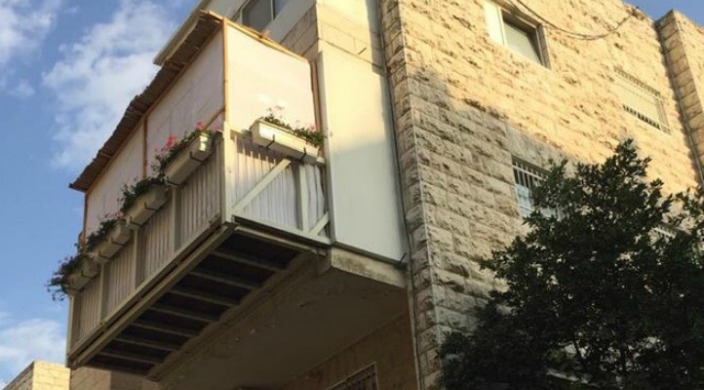 I grew up in a Reform Jewish community in eastern Long Island. Sukkot was the holiday after Rosh HaSshanah when we finally said “farewell” to summer. The weather turned cooler, heavy coats emerged from moth-ball encased slumber, and the screen doors were replaced with storm windows. There were two sukkot (plural of sukkah; a small outdoor hut used during Sukkot) in the neighborhood synagogue – one on the bimah of the synagogue and one in the synagogue’s parking lot. They were decorated with local flora – pine branches, maple leaves, and bull rushes from the shores of the Great South Bay. As a religious school student, I remember going into the sukkah, singing songs, and chanting the blessings, but we never ate in the sukkah or slept out there – it was just too cold.

When I moved to Los Angeles and began my tenure as the cantor at Temple Isaiah, my husband Rabbi Donald Goor and I embraced the yearly building and decorating of our sukkah. Our home sat on a hill overlooking the entire San Fernando Valley and the Santa Monica Mountains provided the perfect backdrop for our seasonal structure. We invited friends to help decorate and each year the sukkah had a theme: one year it was super heroes, another year it was famous Jewish women, and in 2001, just weeks after the attack on the World Trade Centers, we decorated the sukkah in red, white, and blue.

Five years ago, Don and I made aliyah to Jerusalem and in our shipping container of household goods that sailed from Los Angeles to Ashdod and then was trucked to Jerusalem were some of our favorite sukkah decorations: the sides of a sukkah lovingly painted by my friend Julie and some decorations from that 9/11 sukkah made by Andrea and Lara. When we looked to purchase an apartment in Jerusalem, we always hoped the “right one” might include an outdoor space suitable for a sukkah – perhaps a balcony large enough to hold a sukkah that would be open to the stars or maybe a ground floor apartment with a garden.

The apartment we purchased and subsequently renovated was neither on the ground floor nor had a balcony large enough for a sukkah, so the decorations remain boxed up in our machsan (storage room) in the building’s basement. But that doesn’t deter our Sukkot celebration. Instead, we are invited to the sukkot of friends. Although we don’t build a sukkah of our own now, many of my Jerusalem neighbors are extremely creative in managing small apartments and adhering to the traditional rules for sukkah construction.

It seems that Jerusalem is home to a particularly unique type of sukkah: precarious cantilevered sukkot hanging off the sides of buildings. These sukkot are engineering marvels: balcony sides are opened and lowered and a temporary floor extends, creating space for the sukkah to be constructed. I’ve never been invited to dine or dwell in one of these sukkot – and I’d be terrified to spend much time hanging off the side of the building while pretending to enjoy reciting b’rachot (blessings) and finishing a meal. But as much as I’m scared to be a guest inside one of these sukkot, I’m just as unnerved walking under them. They hang, seemingly effortlessly off the sides of buildings, and are neither part of the ground nor a part of the sky. As I pass by on the street below – keeping a good distance away – I can hear the voices of people celebrating inside, oblivious to the sukkot’s tenuous nature and the cables suspending them 40 feet off the ground.

What is exceptional about these sukkot that populate Jerusalem is they literally hang between the two Jerusalems of which the ancient rabbis speak: the Jerusalem above or the heavenly Jerusalem (shel malah) and the earthly Jerusalem or the Jerusalem below (shel matah). In Jerusalem, we live constantly and continually in these two places.

Cantor Evan Kent is an oleh chadash (new immigrant) living in Jerusalem, where he is on the faculty of Hebrew Union College-Jewish Institute of Religion. For 25 years, he served Temple Isaiah in Los Angeles, CA.