Rabbi Abraham Joshua Heschel once wrote, "Judaism is a religion of time aiming at the sanctification of time...Judaism teaches us to be attached to holiness in time, to be attached to sacred events, to learn how to consecrate sanctuaries that emerge from the magnificent stream of a year."1 Shabbat is the day of the week that God deemed "holy" in the Ten Commandments. The trick, as I see it in the twenty-first century, is how to consecrate this holy time called Shabbat amidst our busy lives? How do we slow down, if not stop, to see the peacefulness of Shabbat?

During the school year (do not kid yourselves, our minds and bodies remain affected by the school calendar many years after we finish our formal education and the last student leaves our homes) our lives are more regimented; work has its schedule, the synagogue calendar is published with defined meeting times and location of services, and the progression of holidays is our guide to the flow of the months and seasons. Friday nights might find you at services, at home having a family meal, catching a plane at the airport, or watching a local football game. But, come the summer months most things change. Other than July 4th and Tisha B'Av, the calendar is void of commemoration for three months. For three months, our bodies seem to slow down. The late sunset pushes dinner time past 7 or 8pm, and we don't feel like it is delayed at all. We take vacations or staycations, however, we don't seem to completely unwind. We need Shabbat more than ever to provide us with the vision of the holiness of God's work and to step back and review our own productive contributions to ourselves and our world. We need to slow down.

Slowing down also pertains to our culinary preparations for Shabbat. The laws pertaining to Shabbat dictate that we should do no manner of work, a.k.a. no cooking on Shabbat. Historically, adherence to this dictate was accomplished by slow cooking of meat and bean stews-cholents in Europe, tagines in the Maghreb of North Africa, hamins in the Middle Eastern Levant - or by preparing food in advance to be served at room temperature or cold. Five hundred years ago, sealed pots were brought to the communal ovens to slowly cook in the fire's embers overnight and were retrieved Shabbat afternoon for the Shalosh Seudat, the third meal of Shabbat. Most homes didn't have their own ovens back then, so heating the house wasn't a concern during the hot summer months. In any case, oven location aside, it was not desirable to eat hot food when the temperature outside was in excess of 80 degrees, so food was often prepared in advance. The problem arose when there was no refrigeration. Keeping food cold was only possible if a home had a deep cellar or if an aquifer near home provided cold water for preservation.

In Sorano, Italy, I visited the Jewish ghetto, where the homes were built into the mountain rock and long, deep passages underground were used for cold storage (as well as for secret escape routes when needed). Shelf life of prepared food could be extended in this environment. Another way to preserve food was to combine the cooked or raw food with vinegar and/or sugar. This is most likely why Jewish cuisine from all over the world is known for its pickles, relishes, and preserved foods. Eggplant caponata is an identifiably Italian appetizer of sautéed eggplant, onions, and tomato, seasoned with capers, red wine vinegar, and sugar. What is less identifiable is that this dish is a 400-year old Jewish Sabbath dish. Jews were exposed for 700 years to the foods the Moors enjoyed and brought with them to Spain. The island of Sicily was a Spanish territory in 1492 when its 40,000 Jews were expelled during the Inquisition. These displaced Sicilian Jews loved eggplant and cooked it often. Italians thought it was poisonous (not to mention that they associated it as "Jew" food) and called it melanzana (from mala insane, which means bad spirit or bad apple). When the Spanish explorers brought tomatoes to the old world, most people did not eat them, because these, too, were considered part of the nightshade family and thus poisonous. Once eggplant and tomatoes were determined to be edible, they were introduced into Italian and Italian Jewish cuisine. Combining eggplant and tomatoes with the addition of vinegar and sugar ensured their place on the Sabbath table. As an aside, the availability of refrigeration enhances the flavor and shelf life of caponata. As long as you don't double dip a spoon in the jar, one recipe makes enough for you to serve for more than one Shabbat and will last in the refrigerator for weeks.

This summer, take your cue from the wisdom of Rabbi Heschel, the laws governing the celebration of Shabbat, and the culinary experience of our ancestors from Italy and around the world. Slow down, appreciate all that you have accomplished, appreciate the bounty of nature that we are blessed with each summer, and cook that bounty in a way that requires little toil, little heat, and little last-minute preparation on Shabbat. If you do this, you will truly make the Sabbath day holy and will probably succeed at making your life more "whole." Eat in good health! 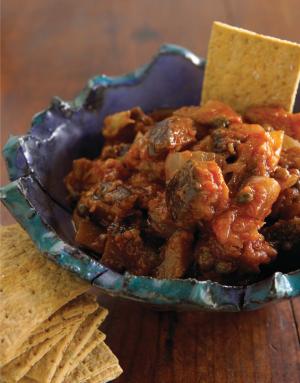