This Synagogue Embraced a New Narrative for Teaching the Holocaust 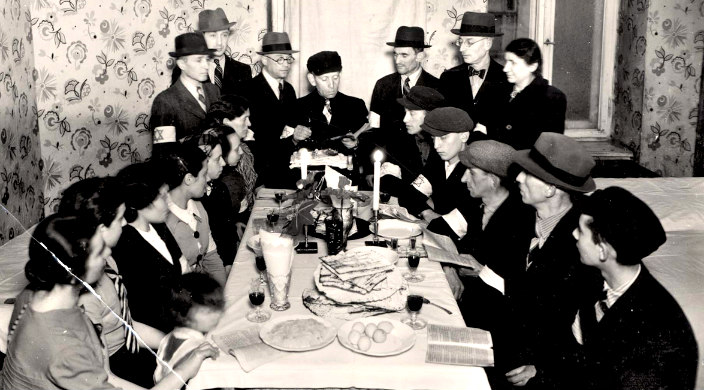 Have you ever noticed that when we teach the Holocaust, we let the perpetrators dictate the story for us? We use their pictures and their propaganda to tell our story, forgetting that their agenda was to dehumanize the Jews. We use their timeline, 1933 to 1945, as if their victims had no existence other than that the Nazis gave them.

We present the Jews as the eternal victims, helpless in the face of the oncoming force of Nazi hatred. We focus on the huge number of people lost: faceless, nameless bodies fed to the fires. By allowing the Nazis to tell our story, we have unwittingly allowed them to continue their agenda of dehumanization and to make us feel eternally victimized.

We need a new narrative.

We need to tell the story from our point of view – using the documents, pictures, literature, art, and music left behind by our ancestors. We need the testimony of the survivors. We need the story to begin before the rise of the Nazis and to continue beyond the liberation of the camps.

We can tell the story of the Holocaust from the Jewish point of view because the Jews in the Holocaust left behind documents to tell us what really happened. They knew that if they did not document what was happening, their story would be left to the perpetrators to tell. The Oneg Shabbat archive was collected in the Warsaw ghetto for this purpose.

When we tell the story from the Jewish point of view, we give the people back their faces and their names, and we see a different story than the one we are used to.

We see a story of people who held onto their humanity and their Judaism in the face of chaos and terror.

We see individual stories of strength and courage, even if many of them end in tragedy.

We see and acknowledge the horror we endured but recognize the strength with which we met that horror.

I learned about this new narrative while attending a seminar at the International School for Holocaust Studies at Yad Vashem, the Holocaust museum in Jerusalem. I went to the seminar hoping to come out with a few new ideas about how to teach the Holocaust in our religious school. I was blown away by what I learned.

In teaching in this new way, we start before the war, turning the victims into living people with stories to be told. We come to understand that they were regular people who met the oncoming terror and chaos as best they could. People who strove to hold onto the things that were most important to them. For some, that meant underground schools and synagogues. For others, that meant theaters in the ghetto and poetry study groups in the camps.

The old narrative ended in 1945, leaving the survivors as nameless near-corpses in the camps and as terrified children cowering in hiding places or lying about their identities. The new narrative continues after the war, and we come to understand the path our ancestors took from victim to survivor. We see how they stepped out of the ashes and the bunkers, found a way past the anger and the sorrow, and rebuilt their lives.

I returned from Yad Vashem with the tools to design and implement a comprehensive new Holocaust education program for my synagogue based on this new narrative. We have just completed our second year of the program. With the help of a grant from the Center for Jewish Education of the Jewish Federation of Greater Dallas, I am in the process of bringing this new program to other synagogues in our area.

We also developed a new way to commemorate – and even to celebrate – Yom HaShoah. It is a seder ceremony that commemorates the events of the Holocaust, akin to how the Passover Seder commemorates the Exodus. This Holocaust Seder aims to recognize that once again evil people tried to kill us, but they failed. We are still here, and we celebrate our survival even as we honor our lost and remember the terrible things that happened to us.

Dr. Deborah Fripp is the vice president of tikkun olam (repair of the world) at Congregation Kol Ami in Flower Mound, TX. You can learn more about the education program she describes here at www.TeachTheShoah.org and about the seder at www.HaShoahHaggadah.org.