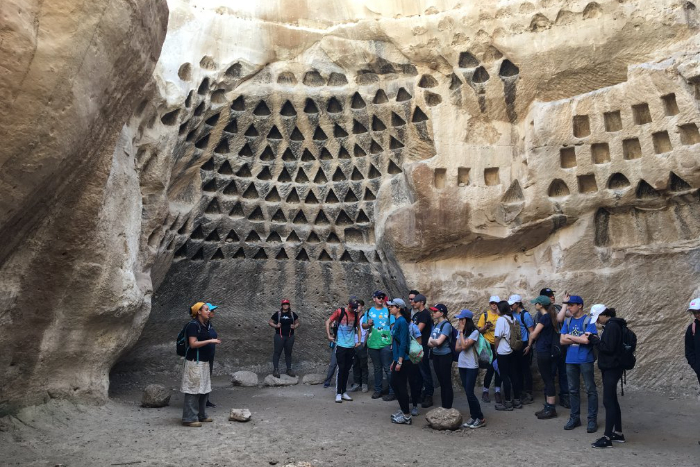 For those of us who attended Hebrew school as children, we likely remember the Bible stories that were taught. We file them away in our memory, bringing them out once a year on a particular holiday to remind us why we are feasting or fasting. In our early years, these bible stories become central to and define our Jewish identities. That is until we reach the age when we are old enough to learn in graphic detail about the horrors of the Shoah.

When I was in seventh grade, my synagogue required us to take a year-long class studying the Holocaust. For the next few years, I came to define Jewish identity as our duty to remember the six million, causing me to push aside all the lessons from the TanachTanachתנ"ךAcronym for the Hebrew Bible, constructed from the first letters of its three sections: Torah, Neviim, and Ketuvim. , the Hebrew Bible.

Now, years later as a Jewish history teacher at URJ Heller High, I see firsthand that our students are already well-versed in tikkun olam and Holocaust education. I’m grateful that the Reform Jewish Movement is excelling in these areas, and they are certainly essential to modern Jewish life. However, it brings me back to the question of Jewish literacy. Are we doing enough to engage on a daily basis with our ancient sources?

The Heller High Jewish history curriculum is designed to teach Judaism as a civilization. On the first day of class, I ask my students to nominate different moments that we might define as the beginning of Jewish history: Creation, Abraham, 12 tribes, slavery, Mt. Sinai, King David, etc. Some even suggest jumping ahead all the way to 1948. There’s enough material for four months that comes from the modern period, so let’s just focus on the State of Israel, they argue.

Well, I explain to them, the Tanach is our owner’s manual. If we want to operate this complex thing we call Jewish identity, it’s probably worth reading the instruction book.

When we open the Tanach and read it in class, we’re seeing and discussing these words for the first time as adults. It’s not just a bunch of kids’ stories! For the first time, our students read the stories of Judah and Tamar, and David and Bat-Sheva. In the first two weeks of the curriculum, we endeavor to make the Bible come to life, and understand it as the foundation of the Jewish People.

One of the more meaningful discussions we have is the meaning of t’shuvahT'shuvahתְּשׁוּבָה"Return;" The concept of repentance and new beginnings, which is a continuous theme throughout the High Holidays. , repentance or return. We challenge our students to look at the behavior of Jacob, Moshe, Devorah, David, and Solomon to understand the essence of this concept, and why we demand it from our leaders both in ancient times and today.

Perhaps the most complex topic we teach when studying this time period is the idea of avodah zara, idolatry. We see it at Tel Gezer where the Canaanites erected monoliths and an altar to make sacrifices to their gods. We encounter it in the biblical Book of Judges when the Israelites continually reject the God of Israel to worship the foreign deities Baal and Astarte. We see it in artifacts uncovered in excavations at the City of David in Jerusalem, figurines of a fertility goddess that our ancestors prayed to.

Yes, we teach what avodah zarah means in the biblical context, but equally important is defining what that means today. Is the one-dimensional pursuit of money and status avodah zarah? Is being on your iPhone at the family dinner table avoda zarah? Is cyberbullying a form of avodah zarah? Is a smoking addiction? We don’t always come up with definitive answers, but it seems, in a way, that asking the question is more important.

There’s no question that studying the Tanach gives us a far better understanding of the modern State of Israel in which we see ourselves as the continuation of an ancient people in our homeland, speaking our ancient language. A group of our students once summarized this in a letter they wrote at the end of the semester:

“Every day in class we learned an immeasurable amount of history, which we internalized as part of our identities. Through the lessons, the history became a part of us as we began to see ourselves as part of the Jewish people. Our tiyulim [field trips] tied us to the land even more, and we were able to connect the class lessons to the Land of Israel."

“Before coming on this program, we were distantly connected to Jewish texts, and felt uncomfortable with the connection between the Tanach and the modern world. However, we now see the relationship between our lives and this literature. The Jewish people, faith, territory, and language have all greatly influenced our identities, creating an unbreakable chain between us and the Jewish literature of antiquity".

“We are now able to understand how these texts have influenced Israel in today’s world and created a resurgence of Jewish culture in Eretz Yisrael. This new awareness of our Judaism wouldn’t exist if it weren’t for the Jewish history class.”

I am so grateful for the incredible opportunity to share with the students a love for Israel that is deeply rooted in the Hebrew Bible.

Learn more about Heller High and find the Jewish youth program that's right for your child.

David Alon has been a teacher at URJ Heller High for ten years.

END_OF_DOCUMENT_TOKEN_TO_BE_REPLACED

I've been reflecting on the story of America's founding - the narrative many of us learn as children in the United States. I've recently learned a different version of that story - one that I now recognize intertwines with my own. My identities as Cuban American and Jewish have been shaped by Indigenous stories in America and in Cuba; particularly the themes of beginnings, loss, transformation, and change.
Israel
Image