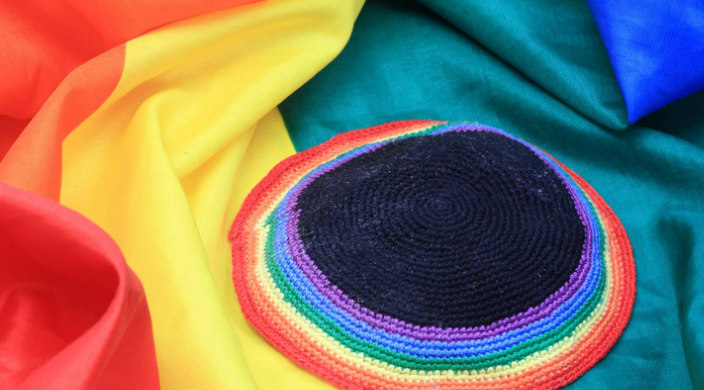 I’ve known this in my bones for as far back as I can remember, but I never knew whether I should ignore it, hide it, or try to pray it out – because in the Catholic community in which I grew up, openly queer people were seen as “looking for attention” or “causing trouble.”

For a long time, I didn’t know why I was so uncomfortable in the boys’ bathroom or why I felt so fake when I was asked to play with the “other boys.” As a child, I didn’t have the vocabulary to understand this, and there wasn’t much insight on gender expansiveness from my religious community.

Over time, I slowly realized that I was pansexual (I could never understand why gender seemed to matter so much in relationships) and, to make matters more complicated, I also realized I was nonbinary/transgender – neither a man nor a woman. Talk about “causing trouble”!

Growing up, I internalized the homophobia and transphobia I saw around me and converted it into self-hatred. When I was 16, for example, an extended family member told a story over dinner, going into gory detail about how he and his friends would stalk people outside of gay bars and beat them with baseball bats. It was hard enough to hear him laughing about brutally hospitalizing strangers, but when several others at the table laughed and clapped along, my heart broke.

I really didn’t want to be on either side of that baseball bat.

Decades later, while listening to podcasts about Judaism – including On the Other Hand with Rabbi Rick Jacobs and Judaism Unbound – I heard an interview with April Baskin, former vice president of Audacious Hospitality for the Union for Reform Judaism. She spoke about diversity, equity, and inclusion in Jewish communities – and her words deeply resonated with me.

Finally, after having learned more about Judaism and identifying with so much of it, I decided it was time for me to visit a Reform Jewish community. After all, as I had heard on that podcast, “You can’t be a Jew alone.”

When I first visited a synagogue one Friday night, I walked into a small congregation, alone and nervous. A happy woman with a partial buzzcut and a toolbelt greeted me. When she saw me open the siddursiddurסָדוּר"Order." Refers to the Prayer Book (i.e., the "order" of the prayers).  upside down, she sat next to me and explained the service in quiet whispers. I later found out she was the temple’s president  –  and part of the LGBTQIA+ community! I went into this synagogue half-jokingly prepared to shout, “April Baskin said you can’t kick me out!” but instead received this simple act of kindness that truly began my Jewish journey.

After that first night, I went from Reform temple to temple, at one point visiting four local synagogues and reading a new Jewish book every week. The customs, words, and people changed, but each time, through congregants’ words, actions, and the rituals they performed, I was reminded of the idea that we are all created b’tzelem Elohimb'tzelem Elohimבְּצֶלֶם אֱלֹהִיםLiterally "in the image of God;" the concept—from Genesis 1:27: “God created humankind in God’s image”—that because all humanity is created in the image of God, each person is equally valued.  .

I often think back to the Talmudic tale of the man who was insulted by a rabbi for being too ugly, who then reminds the rabbi, “When you insult me, you also insult the craftsman who made me.” It’s difficult to argue with that logic: If life is a gift, how could we hate someone just for their face?

And yet, queer people can have such a difficult time accepting ourselves for who we are. In movies, TV, and books, we see the same stories again and again, with a few token exceptions thrown in – and when we don’t see our identities reflected in our communities, we are left to assume something is wrong with our identities. That we are somehow wrong.

I’ve been blessed, though, to meet so many queer leaders in the Reform Jewish community, from cantors to rabbis to other audaciously hospitable lay leaders. Sometimes, I wonder where they all come from! But then I remember my own experience: They didn’t come from anywhere, they’re just more visible now – and Reform Judaism can embrace that visibility.

By learning about other queer Jewish leaders’ journeys, I’ve found a path to repairing my own relationship with holiness. I grew up ashamed of who I was, but I’ve come to see that it’s another blessing for which to be thankful.

Jewish custom compels us to say 100 blessings a day to help us find life’s wonders and radical amazement. My queerness and transness are just small wonders in a world full of surprises – patterns of brilliant color in a sometimes-rainy world. How dreary would life be if one could only be a man or a woman? If one could only love someone based on the gender they were assigned at birth? How many fewer colors would there be in the rainbow of our humanity?

And so I say a brachab'rachahבְּרָכָהBrachot (plural). Literally, “blessing;” follows a set formula that praises God; unique blessings exist for many different occasions.  for this rainbow inside of me, and for all of the other colors in the world.

If you have a rainbow inside of you  – or know someone else who does  – I hope you say a blessing for it today, too.

J Collins (they/them) is a lifelong educator, public servant, and storyteller. They are the executive director of GG+, a nonprofit empowering tweens and teens through inclusive esports. They previously led game-based education and ed tech policy initiatives at the Smithsonian Institution's Center for Learning and Digital Access and later at the U.S. Department of Education's Office of Educational Technology. J currently teaches computer science in Cleveland, OH, and is an alum of the Union for Reform Judaism’s LGBTQIA+ JewV’Nation Cohort.