A Time to Follow Rules and a Time to Break Them 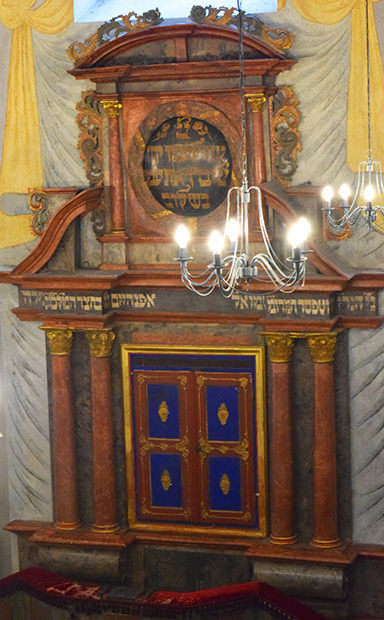 I was somewhat surprised, therefore, to find myself bent over, my head in the ark of an old synagogue in Kolin, Czech Republic. Around me, a tour guide and others were yelling at me in a variety of languages, including German:

“This is not allowed.”

The truth is, I didn’t hear them. Even if I had, I’m not sure I would have withdrawn my head from the ark. Although we all knew that the beautiful ark had been donated in 1699 by Samuel Oppenheimer from Vienna, and miraculously was still there, I knew something they didn’t.

I knew that the objects that had made the ark sacred – the Torah scrolls that once had lived within it – were no longer there. I knew, too, that one of those scrolls had had a profound impact on my life. Although my head was firmly in the ark, inhaling the essence of a 300-year-old object, my heart and soul – moved beyond words – were in two places.

Part of me was in 21st-century Lexington, MA, and part of me was in Kolin, Czechoslovakia, during the decades and centuries that preceded 1930. For hundreds of years, Kolin had been home to a thriving Jewish community – the second largest in Czechoslovakia – until the Nazis killed off the town’s Jews. Even as they destroyed the people, the Nazis retained ritual objects for display in a planned “Museum of an Extinct Race.” I lovingly refer to one of those items as the “Kolin Torah.”

Over 40 years ago, this particular Torah made a pilgrimage via London’s Westminster Synagogue to reside in permanent loan in Lexington, MA. On Kol Nidre 1972 (10 Tishrei 5733), just over 42 years ago, the Kolin Torah was dedicated at Temple Isaiah as a memorial to the 6,000,000 Jews who perished in the Holocaust. Rabbi Cary Yales, z’l, delivered stirring words when he brought that Torah into our community.

The Torah is quite fragile, so we treat it gently. Most of the year the scroll lives behind glass. On Yom Kippur morning, however, the Kolin Torah is carried lovingly through the congregation by our president, before it is opened and read, after which it is returned to the ark to sit amongst our other Torahs for the rest of the day.

On Yom Kippur in 2008, during my tenure as Temple Isaiah’s president, I was honored to carry our beloved Kolin Torah through the congregation. In many ways, it was just as I imagined it would be; in other ways, I was totally unprepared for that walk through the sanctuary.

Who would have thought I would be thanked numerous times as I made my way through the maze of congregants? How could I possibly have anticipated the faces I saw? Many belonged to people I have known a long time, and reflected their pride in me as I carried the scroll, as well as their own emotions upon touching our sacred Kolin Torah. Other faces were new to me, and in them, I made connection after connection. I may not have known their names, but for those few seconds, we were powerfully connected. In some of the young people’s faces, I saw awe and reverence. Even if they didn’t fully understand the depth of meaning in what they were experiencing, they knew it was a special moment and they were proud to be part of it. The faces on the older people, too, were full – full of the horror of the Holocaust. At the same time, I saw their gratitude for the present and their hope for the future. As I wove my way through the congregation, we were united by the music we sang, even as each person seemed alone with his or her thoughts. It was Temple Isaiah at its finest – individuals allowed to be their own best selves, standing together as a community.

As I entered the synagogue in Kolin and stuck my head in the ark, I connected our Torah and our community with the scroll’s ancestors and its history. During those few minutes, I reassured whatever empty space was in that ark that we in Lexington were taking care of the Torah and giving it the respect it deserved. In turn, it was contributing something important to our vibrant, meaningful Jewish community across the ocean. I was hopeful that somehow, in some small way, the spirits and the ghosts that were there in that synagogue – in that ark – would know all that.

As Yom Kippur 5775 approached and our community prepared, once again, to welcome the Kolin Torah into its midst, there was one more connection to be made. When I gently touched the Torah with my tallit (prayer shawl) on Yom Kippur morning, I had tears streaming down my face as I felt as if I were bringing regards from its original home. As I recalled the synagogue, its ark, and its cemetery, I hope that somehow I was able to convey to that incredibly powerful scroll that I had been in its home and that I breathed the air of its younger years. As they often do, past, present, and future all converged in our sanctuary on Yom Kippur. For me, that convergence had added meaning this year.

Indeed, I may have broken a rule when I stuck my head in that ark in Kolin, but I have never been so glad to flout a rule as I was on that day. Last month, as I atoned for my sins of the last year, I left that one off the list.

Margie Bogdanow is a parent educator, coach, and consultant in the Greater Boston area. She writes at HearHereParent.