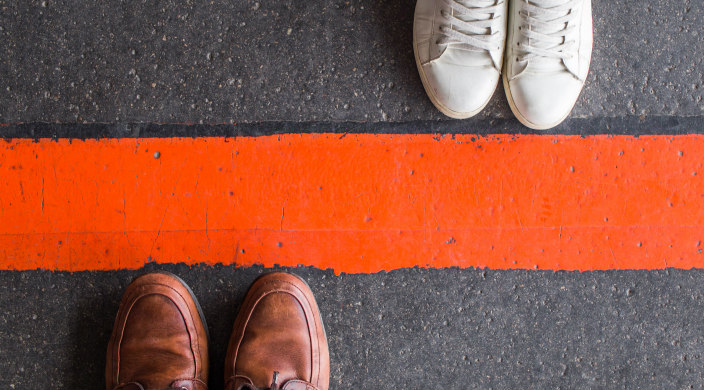 The teaching that follows here is adapted from one that I was honored to share during President Reuven Rivlin’s annual pre-Tishah B’Av study session, which you can watch on Facebook or at the bottom of this post.

I first met President Rivlin just weeks before he became Israel’s tenth president. It was the day of the funeral of three Israeli teens, Eyal Yifrach, Gilad Shaar, and Naftali Frankel – an excruciating day for Am Yisrael. There was tension as to whether the new president was prepared to have an open, constructive relationship with the Reform Movement. But given that at the conclusion of our meeting we were both heading separately to the funeral, I asked him, “We don’t need to agree on how we understand and live Jewish teachings but how, especially on a day like today, could we not find commonality and respect to work together for the well-being of the Jewish people?”

It wasn’t clear on that day that President Rivlin would be committed to building a more pluralistic Israel, but it has been clear ever since. I offer this teaching in honor of our remarkable and courageous president, Ruvi Rivlin.

One who separates from the wider Jewish community, although they committed no transgressions, but remains separated from the congregation of Israel, observes no commandments together with them, does not include themself in their troubles, nor afflicts themself on their fast-days, but follows their own path as the rest of the people of the land, acting as if they were not one of them, they have no share in the World to Comeolam habaהָעוֹלָם הַבָּאThe world to come.     .

During this time of COVID-19, aren’t we all separated from the wider Jewish community? But Rambam presumes that the one who pulls away from the community does so not because of fear of contracting a virus, but rather because of arrogance or disinterest. That individual doesn’t even connect to the community in times of trauma or when there is a communal fast.

Why does Rambam specify the time of disconnection to be those times of communal trauma? Because those should be times when we intensely feel the responsibility to be part of K’lal YisraelK'lal Yisraelכְּלַל יִשְׂרָאֵלThe Jewish community or the whole of Israel; often used to refer to Jewish unity or solidarity. and when K’lal Yisrael should be its most inclusive.

Why don’t Jews in Israel and around the world feel more connected, more mutually responsible? Why are we feeling so isolated and separate from each other? Too much of the isolation that we feel is from a different kind of virus – one that causes us to disparage those Jews who do not pray, think, believe, or vote as we do. The most painful isolation we are feeling today is from the unnecessary distancing from our fellow Jews.

In Rambam’s Hilchot T’shuvah, it is the individual who withdraws from community, but in our day, too often is that individual pushed away for not accepting his or her separate and unequal status. The tent of Jewish authenticity is guarded ferociously, pushing away even more of our people from taking their rightful place within K’lal Yisrael.

Maybe the State of Israel should follow the example of the UK, which, a few years ago, created a minister for loneliness. What a powerful idea for our Jewish State – and with the size of the new government, I doubt anyone would even notice if another minister were added. But remember that the UK’s minister of loneliness isn’t leading a separate ministry but rather is part of the Ministry of Sport and Civil Society. So maybe Israel’s minister of loneliness should be within the Ministry of Diaspora Affairs, or maybe the Ministry of Religious Affairs, or perhaps the Interior Ministry. Which ministry do you think has caused the most loneliness? Which one could offer the most healing?

Clearly some of what undermines the interconnectedness of Am YisraelAm Yisraelעַם יִשְׂרָאֵלLiterally, “the people of Israel.” The nation or people of Israel. The Jewish people. is the kind of Orthodox supremacy that is now built into the Jewish State, creating systemic inequality that ripples outward, affecting global Jewry. Systemic policy changes are required and patience will not bring the change we need, but courage and imagination can. This moment when we are separated and isolated can help us envision a better way to strengthen Jewish peoplehood.

This isolation is also personal. This past April, my mother died. Although she did not contract COVID-19, this modern-day plague disrupted the way our family and every family mourns. She was buried on Yom Ha’Atzmaut in San Diego, CA, and due to the pandemic, I could not travel there from New York City.

As I stood virtually in our NYC apartment with my sister standing at the actual gravesite, a sense of debilitating loneliness came over me. The smell of the fresh earth along with the excruciating sound of the earth hitting the coffin are integral to our wise tradition’s way of cracking open our hearts so that we mourners may absorb the finality of the death. Observing this ritual electronically felt spiritually insignificant. Yet there was a nechemta, a redemptive dimension, as well.

More people joined in my mother’s shivashivaשִׁבְעָהSeven-day mourning period that begins on the day of burial.  than could have ever fit in our home. They tuned in from across North America and from across the ocean in Israel, from every segment of the Jewish world: Orthodox, Conservative, Reform, and others showed up, thus expanding the circle of those who could offer the loving gift of presence, and they did so without ever leaving their own homes.

How Isolation Can Lead to Positive Change

I hope that, when the pandemic’s deadly shadow is behind us, we don’t go back entirely to the way things were. Some of what has changed is for good.

How ironic that while the global pandemic separates us, it also brings us together, as we can experience in virtual study sessions like President Rivlin’s. Psychologist Richard Tedeschi has researched a different phenomenon from post-traumatic stress disorder, which he calls “post-traumatic growth.” He found that traumatic experiences can spur positive change, including the exploration of new possibilities, improved relationships, and spiritual growth. So, despite the misery resulting from the coronavirus outbreak, this can also be a time for us to grow as individuals and as a Jewish people.

In her poem “Tisha B’Av 2007,” my treasured colleague Rabba Dr. Tamar Duvdevani probes the inner landscape of the destruction of her friend’s house:

Trying to endure loss in isolation is more than painful; it puts our lives at risk. Rambam understood that when he described the consequences of not being connecting to Am Yisrael at times of trauma, including our fast days. The last section of Rabba Duvdevani’s poetic prayer uncovers the core empathy that can help us build new connective tissue within our very divided people.

One Tisha B’Av morning
He said, he told, he spoke, he was pained
And the words turned into tears
And now I’m crying

Her friend’s tears ignite hers; she can’t remain aloof from his suffering. His pain binds them together. As in the book of Eichah (Lamentations), enduring loss and pain in isolation is excruciating – but the chidush (discovery) for us this year could be that much of our isolation is self-inflicted.

We can change much of the status quo of our divided people. It begins when your pain becomes mine and mine becomes yours – but it doesn’t only happen in trauma and loss. Joy can also bind us together.

The personal can awaken the bonds that tie us together, but it must not stop there. But without the personal shifts we won’t gain the will to fix the systemic inequality that’s dividing and demeaning too many of us from our siblings.

But it starts now, with each of us alone and all of us together.

END_OF_DOCUMENT_TOKEN_TO_BE_REPLACED

There are a few days in my life that stand out. There are the big milestones: my first days of school, going to camp for the first time, and my first homerun. Another one of those dates that stands out is December 28th, 2015. That was the day that I made aliyah and became an Israeli citizen.
Torah Study
Image