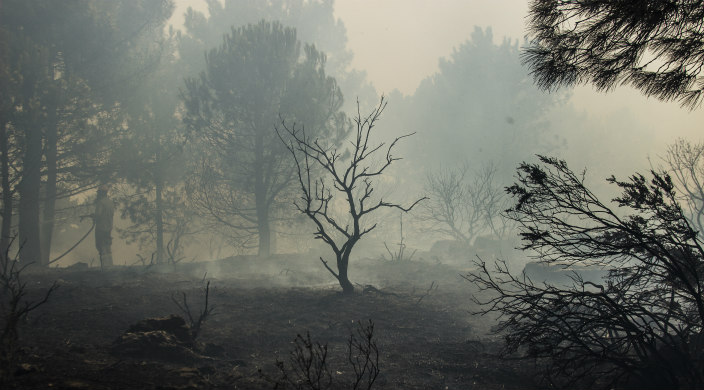 The wind and the smell of smoke woke us. We stumbled out of bed and joined our neighbors in the cul-de-sac to stare at the raw, red glow lighting up the hills behind our houses. Forty miles per hour gusts of wind fanned the flames, like billows blowing into a cosmic furnace.

We grabbed family photos, medications, important papers, and, inexplicably, gym clothes. Emmy, our German Shepherd mix, knew something was up and never left our side. We made it out; the fire stopped about a mile short of our neighborhood.

Others were not so lucky. The ravaging beast we saw approaching, the Tubbs Fire, proved the most destructive wildfire in California history, part of a barrage of four fires in our area last October. The Tubbs Fire alone killed 22 people, including a past president of our congregation, Marnie Schwartz, z”l. Homes, businesses, schools – 5,643 structures – were destroyed, along with almost 40,000 acres of parkland, forest, and wilderness.

We first evacuated to the synagogue, opening it up to anyone else fleeing the flames. Having served as Congregation Shomrei Torah’s rabbi since 1996, I have loved Santa Rosa and the natural beauty of “the wine country” from the start. My wife, Laura, and I bought a home, raised our kids, and helped grow the congregation, which built its first synagogue just over a decade ago. From there, we watched in shock as the fire gobbled up more and more of the city. In the morning, all we could see were clouds of black smoke.

At first, I was in shock, immobilized, unable to do more than manage what was right in front of me. As time passed, shock morphed into mourning for those lost to the flames, for the 32 families in our community that lost their homes, for our pre-fire sense of safety, and for the landscape – parks, fields, hills, mountains, trees – that makes Sonoma County such a beautiful place to live.

For 22 years, barely a week has gone by when I haven’t spent time in the wilderness around my house. An avid birder and animal tracker, I have developed an intimate relationship with the flora and fauna around me. Now, where once there was green, the ridgeline is black and brown. Lower down, the underbrush is gone, but the trees, for the most part, though singed, are still there. I mourn the devastation I can see, and worry about the red-shouldered hawk that hunts in the grassy meadow near my house, and the colonies of acorn woodpeckers that constantly battled over their acorn granaries. They too have lost their homes.

The Kabbalists of 16th-century Safed in Israel imagined the s’firot, the emanations of Divinity that animate our reality, as a cosmic tree with its roots in the heavens and its branches on earth. Trees play an essential role in Jewish life, beginning with the description of the Torah as Etz Chayim, the Tree of Life.

Tu BiShvat (the fifteenth of the Hebrew month of Sh’vat), our New Year of the Trees, begins this January 30th at sundown. The holiday dates back at least 2,000 years, to when the upkeep and support for the Second Temple in Jerusalem depended on tithing; its name reminds us of the date that the tithing of the first fruits of the trees was calculated. In Hebrew, the number 15 is represented by the letter yud for 10 and the letter hey for 5. But yud and hey together spell one of God’s names, Yah, which we are not supposed to speak except in prayer. In other words, the name of God is hidden in Tu BiShvat.

It has been difficult to see God in the fire. So much was lost. But the devastation left behind does not tell the whole story. Here in California, wildfires are a familiar part of the natural cycle of life, death, and renewal; while some life is destroyed, new life emerges. The rains finally arrived as the fires ended, and soon after, little green shoots began to appear from the scorched earth. Even my friend’s olive orchard, burned badly by the same fire that took his home, is showing new growth. Those trees that don’t revive will fold back into the earth and nourish the soil around them.

They say it will be a decade before we fully recover from the fire. Hope is sometimes hard to find, and we need patience. Yet, amongst the trees, even those badly damaged by the flames, new life and the hope they embody are beginning to emerge. Life is returning.

Baruch atah, Adonai, m’chayeih hameitim. Blessed is the Ground of All Being, who revives the dead.