A Week of Trauma and Triumph 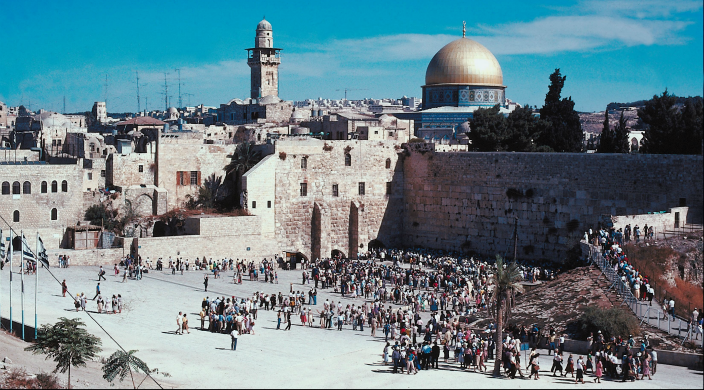 This past Monday, the U.S. opened its embassy in Jerusalem. On that same fateful day, more than 60 Palestinians lost their lives on the border with Gaza. In response to these divergent events, people experienced a range of  emotions.

This confusing, difficult day took place right before Jews around the world will gather to celebrate the festival of Shavuot. Although originally conceived of as a harvest holiday, after the destruction of the Temple, Shavuot transformed into a day celebrating the receiving of Torah at Sinai. We learn all night long to mark the centrality of Torah in our lives; we eat sweet dairy desserts because we were guided to a land flowing with milk and honey. But the sweetness is mixed with bitterness too, not just this year in light of current events but also when the Torah was first given.

Our tradition teaches us that all Jews were present at Mt. Sinai. Think for a minute what it must have been like. There are some who might have felt triumphant that the Egyptian army was defeated and that now we were coming into our own as a people. There are those who may have been traumatized having looked back over their shoulder and seeing the Egyptian army drowning in the sea. In that moment, we rejoiced over our salvation and freedom, but even then, there was fresh pain.

The Rabbis in their wisdom – as many rabbis also will do this week – remind us that the voice of angels reprimanded the Israelites for celebrating as the Egyptians died:

They reminded us that those people who lost their lives were people too. That this moment – when in one day more than 60 people lost their lives – is about crying and weeping for God’s creation that has been killed. It is about asking God, why despite past violence, do their loved ones have to weep for them?

This year we have an opportunity to treat Shavuot as a moment of balance. Together we can walk a tightrope between two conflicting feelings about what has happened in Israel this week. We can rejoice over the redemption of the Jewish people in Israel, and we can celebrate further recognition of our national sovereignty. We can also mourn the loss of life along the Gaza Strip and express concern to our leaders over this violence.

Standing at Sinai, we have to maintain that balance between what Rabbi Joseph Soloveitchik calls the Covenant of Fate and the Covenant of Destiny -- between the suffering fate of our people as slaves in Egypt and the moral and ethical teaching that was passed down to us on Mt. Sinai.

This week we, a nation that is both traumatized and triumphant, got the recognition we deserve. Jerusalem, our eternal capital was recognized by the great superpower of the world. We did it. We can say Shehecheyanu (a blessing of praise). And still, we must not let this moment thwart our moral fortitude and resilience. Now we must stay up all night learning Torah, examining what the Torah and God expect of us.

This week, as we prepare to receive the Torah anew, we return to that vulnerable place we once were leaving Egypt, realizing we are a people susceptible to attack and the target of ire, hatred, and resentment. But as we turn back to Sinai, we also know that we are a goi kadosh – a holy people – who must act with great moral clarity and even, at times, restraint.

On Shavuot, we remember that the Torah was given only to us and it is a Tree of Life to which we must hold fast.