"What Can I Do?" Bringing Together Jewish and Muslim Moms 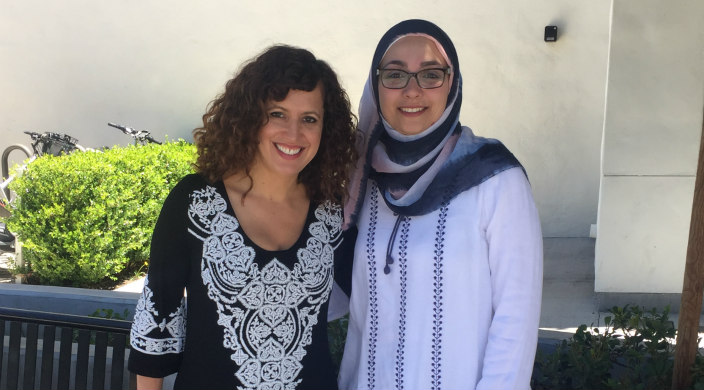 Through a Jewish/Muslim playgroup, my sister Beth has found an answer to a question many of us ask ourselves these days when we learn of incidents of anti-Semitism and Islamophobia: “What can I do?”

Beth calls herself a “Jewbu,” a Jew who practices Buddhist meditations. During college, she studied in Nepal, where she lived in a Buddhist monastery and with a Tibetan family. Now, she incorporates Buddhist practices into her work as a therapist. Despite her nontraditional approach to Judaism, Beth felt a need to respond to these recent events as a Jew, based upon the Jewish values our parents instilled in us.

Growing up, we celebrated Jewish holidays and attended religious school, but the most important aspect of our upbringing was the values and history, both Jewish and American, that we learned. We were taught tolerance, empathy, respect for others, the centrality of family, and a reverence for learning.

Essential to all of this was the history, struggle, and persecution, of our people. As a small boy, our paternal grandfather fled the pogroms of Eastern Europe to the Lower East Side of New York City. I remember, as a child, asking my dad where Grandpa came from. His answer: The Romanian shtetl of his birth was no longer on the map because it had been entirely destroyed by the Nazis during World War II.

Given this legacy of religious persecution, our family understood the special nature of the American government and our Constitution’s First Amendment. My maternal grandfather, a prominent attorney, defended the rights of Nazis to march through a Jewish suburb in the 1960s, even though he vehemently opposed their ideology. He believed that our Constitution’s protection of such abhorrent viewpoints ensured that all Americans would be afforded its protections. We were taught that in America, all people could worship as they wish, or not at all. We learned that our good fortune to grow up in the United States was made possible through the sacrifice of our ancestors.

Recognizing the powerful connection that mothers with young children can make, Beth contacted a local interfaith organization in her small Southern California town. She suggested organizing a Jewish/Muslim playdate with the purpose of establishing connections between the Jewish and Muslim communities and expressing support for what she calls “our Muslim brothers and sisters.”

The response Beth received was immediate and heartfelt. She baked cookies with her three young boys and brought them to a local park for their first playgroup. Many Muslim and Jewish families attended, as did some Christian families, quickly forming bonds; now, the group now meets regularly.

Surely these personal connections will be powerful in a time when members of both communities feel vulnerable. My nephews will have their young Muslim friends in mind if they hear Islamophobic remarks, and I hope their friends will keep my nephews in mind if they see anti-Semitic graffiti.

While picking up a challah from a bakery for Friday night Shabbat, my sister ran into a woman she met at her playgroup. This new Muslim friend, together with others from an interfaith council, wished Beth “Shabbat shalom.” Our world needs more of these small but powerful, acts of kindness!

Despite troubling news reports of violence and religious intolerance, stories of acts of love abound. I am moved by the Muslims who raised tens of thousands of dollars to pay for repairs following the desecration of headstones at a Jewish cemetery in St. Louis, and by Muslims who showed up to assist with repairs only hours after a similar incident at a Jewish cemetery in Philadelphia.

Something about this moment in history is creating solidarity between Muslim- and Jewish-Americans in a way I have never experienced. We must stand together against hate. I urge others – Jewish, Muslim, and otherwise – to share their own acts of kindness and to stand in solidarity with one another. Perhaps some Jewish-American and Muslim-American moms or Jewish and Muslim preschools will follow my sister’s lead and start interfaith playgroups of their own.

Wouldn’t that a beautiful answer to the question “What can I do?”

Emily Marcus Levine is an attorney who lives in Bethesda, MD. She is a member of Temple Emanuel in Kensington, MD.