When the Door Isn’t Always Open: Inclusion and Jewish Teens 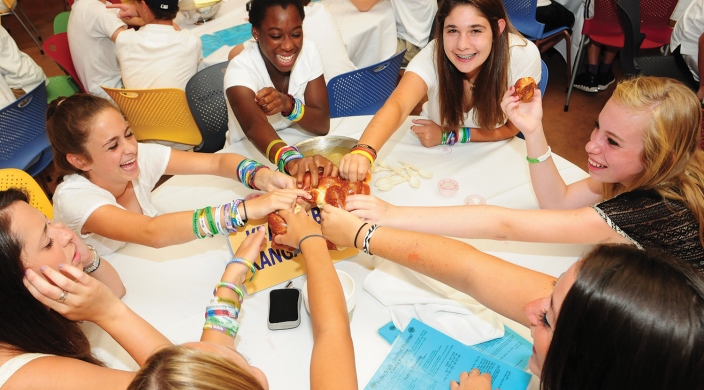 This post is part of #JDAMblogs, a series of blog posts throughout the Jewish community during the month of February in honor of Jewish Disability Awareness Month (JDAM). #JDAMblogs is the brainchild of Lisa Friedman, who blogs at Jewish Special Needs Education: Removing the Stumbling Block. You can participate by writing your own post and linking up with Lisa.

Sometimes it feels like "inclusion" is a buzzword. Talking about inclusion is "in" right now. It's on the radar of the Union for Reform Judaism, Reform congregations, our school systems, and our communities. Growing up with a neurological disorder, Tourette Syndrome, I was on the other end of the inclusion talk, which was about how to include me, a teen who made loud, uncontrollable noises. I have hundreds of stories about not being included, and about inclusion conversations that happened in a way that made it sound as though the community couldn't do what it would normally do because I was there. Inclusion was sometimes worded like a step back, or a concession the community had to make in order to include me.

One story in particular stands out. In 9th grade, I moved away from home in Indiana to attend boarding school in Vermont. The school was not specifically for kids with disorders like mine, but rather a small, caring, creative community willing to take a chance on me. One of my Tourette's symptoms was a loud and consistent barking noise, almost like the beat of a metronome. One day in math class, I started the noises, and they didn't stop. The class was clearly unable to continue, and I was prepared, as in the past, to be asked to leave the room and come back when my Tourette's was under control. Instead my math teacher, a musician, picked up his guitar and said, "Let's write a song about math." He used my Tourette's as a metronome, and we ended up writing an entire CD of math songs. My barking in the background seemed more like a welcome accompaniment than a reason we couldn't do what we had planned. In that moment, "inclusion" took a sharp turn in my mind.

Now, as a Jewish youth professional for the North American Federation of Temple Youth (NFTY), I try to teach the idea that inclusion is not about what we can't do because we are accommodating teens with different needs, but what we get to do because our community is growing with our members. When a teen with disabilities joins our youth group region, it is an opportunity for all teens to understand that our differences make our community stronger.

Our NFTY community is diverse in terms of disabilities and needs. Although we do not always do the right thing, we are learning, we are opening the lines of communication, and we are trying. By meeting with teens, their congregations, and their parents, I hope to demonstrate our willingness to create a space for each teen who wants to be a part of our community. In the NFTY region that I direct, we have started to train our teen and adult leaders to model inclusive behavior, including being cognizant about the use of sarcasm and re-evaluating youth group traditions that, as it turns out, may not be so inclusive after all.

For instance, teens often participate in a game called "nose-goes" when figuring out who will get up from the table to refill a food item at meals. The last teen to put a finger on his or her nose is the one who has to get the food. We realized that for teens who pick up on social cues at a different pace, the "nose-goes" game can quickly turn into a negative experience, so we eliminated "nose-goes" and instead might say this: "The person who has a birthday closest to today goes to get food for this meal." It's a small change, but it's already making a big difference.

Recently, our youth group's regional board met for a weekend-long retreat at URJ Kutz Camp. Although there were many items on our agenda, I made sure that a program on inclusion was a priority. I started by asking the teen board members what "inclusion" meant to them, and they described a place where people didn't feel left out and where teens could be themselves and loved for who they are. At the heart of Jewish youth work, this is what we all are striving to create for the teens entrusted to our care!

At the beginning of the conversation, nobody brought up disabilities, although several teens spoke about times they felt excluded and about judging people before they got to know them. By learning more about teens' ideas about inclusion, we were able to build on what they already knew. One teen asked if I would share others' diagnoses so they could understand more about them and be sure to be inclusive. Although it was a great question, asked with good intentions, the answer was an unequivocal no.

Instead, we talked about how a diagnosis does not define a person and that the best way for any of us to know more about a particular teen is to spend time with him or her. The conversation continued as our teens asked questions about disabilities, the people who have them, and the best language to use in this arena. They had great ideas and thoughts, but mostly, they had great questions. In that learning session, we created a safe space in which they could ask those questions, and by the end of our conversation, something had clicked.

Often, opening the door to people with disabilities and different needs is easy. Creating an inclusive environment beyond that door can be much more challenging. In my work with our community of teens and adults, we seek to break that challenge into small steps:

Inclusion is not just beneficial for teens with disabilities - it makes our community a better place for everyone, and it's clear that the work is worthwhile. I like to think that ours is becoming the kind of community where if I had joined when I was in high school, barking wouldn't throw us off. Instead, we would find a way to make music out of it.

February is Jewish Disability Awareness Month (JDAM), a unified initiative to raise disability awareness and support efforts to foster inclusion in Jewish communities worldwide. The Union for Reform Judaism is proud to partner with the Ruderman Family Foundation to ensure full inclusion and participation of people with disabilities and their families in every aspect of Reform Jewish life.