Why I Wear Converse Sneakers on Yom Kippur 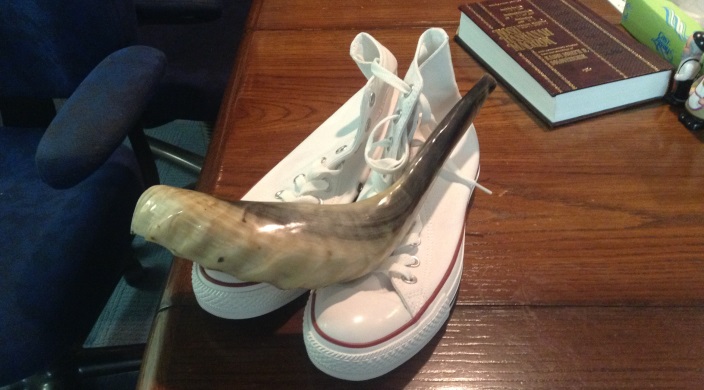 I remember as a kid going to synagogue on Yom Kippur and seeing my rabbi and cantor wearing snow-white Chuck Taylors on the bimah (pulpit). I grew up in a traditional congregation, where many people observed the Jewish prohibition on wearing leather shoes on Yom Kippur. Instead, the rabbi and cantor wore Chucks. How cool is that?

Can you name another religion where, on the holiest day of the year, the leader of the congregation rocks Chuck Taylors? Didn’t think so. The Pope, who is a very humble and caring man, still wears Pradas. Don’t get me started on what our Newark Archbishop wears – but trust me, they ain’t $40 Chucks.

These days, most Reform rabbis wear leather shoes, because Reform is a classy movement and we still think that sneakers on Yom Kippur smack of “the old country.” So for over a decade I have worn nice leather shoes. But last year I went out to Footlocker and bought me some snow white Converse All-Stars to rock on the bimah this Yom Kippur. Stylin’ don’t you think?

To be honest, I wasn’t particularly surprised by the response from my congregation. They are a very welcoming and accepting bunch of people, very unpretentious, and no one seemed to care much that their rabbi was sporting a pair of kicks more suitable for the playground than the pulpit. It didn’t seem to matter much that Chuck Taylor took the place of Johnston and Murphy or Kenneth Cole that day. What impressed me most, however, was the reaction of so many for whom seeing their rabbi sporting snow white Chucks brought back powerful memories of their own High Holydays past. Several times I was stopped by members who wanted to reminisce with me about seeing their childhood rabbi in white sneakers on the bimah of their youth. Some of them even promised that this year, they would wear their own Chuck Taylors, now that they got the “go-ahead” from the head honcho spiritual leader.

I guess the wheel comes around, as they say. Our Reform forebears wanted so much to embrace the dignity and decorum so beloved of the early 20th century that they eschewed anything that smacked of what they termed “orientalism.” Gone were the white slippers and white garments of Yom Kippur, to be replaced by heavy brogues and business suits. Nowadays, though, there is a profound yearning for ritual,  practice, and spiritual symbolism - not for a return to Orthodoxy, as this trend is commonly misunderstood, but for a genuine desire for spiritual discipline and practice in a true progressive context.

If Chuck Taylors are part of that trend, I’m all for it.

Rabbi Douglas Sagal is the senior rabbi at Temple Emanu-El in Westfield, NJ.