Why We Are Bearing Witness at the Border 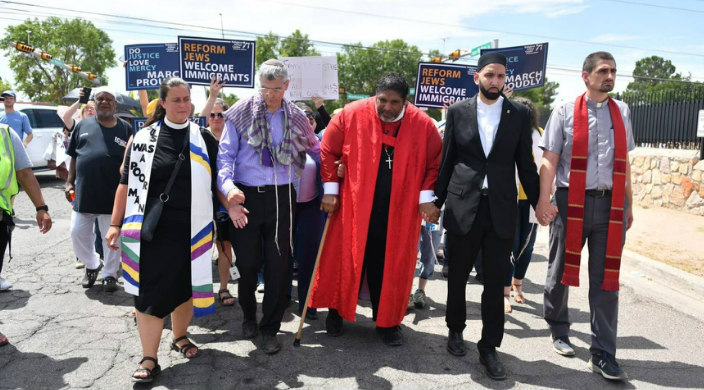 My name is Rabbi Rick Jacobs, and I lead the Reform Jewish Movement here in North America; more than two million strong, it’s the largest and most diverse Jewish denomination on the continent. I’m joined here by Rabbi Ron Segal, president of the Central Conference of American Rabbis (CCAR), our rabbinic arm, which numbers more than 2,000, and by dozens of rabbis, cantors, and lay leaders.

I’m here in El Paso this weekend because I worship a God who is impatient with injustice, a God who demands that migrants must not be wronged. But our obligation is so much greater. In the Book of Leviticus we’re commanded that “the migrant who sojourns with you shall be to you as your citizens;….” And even more, we are commanded “to love the migrant as yourself” (Leviticus 19:33-34). Thirty-six times the Hebrew Bible repeats this obligation, yet the directive to love our neighbor is issued only once.

Because it is obvious and straightforward to love what is familiar. But to love the migrant, the stranger, the one who might not look like you, who might speak with an accent, or pray differently than you do, yet who also is loved by God – we must love them as well.

In fact, today, we must love them even more. Today, they are vulnerable to hatred, to xenophobia, to violence, to separation, to deportation, to detention. Today, we are witnessing an unprecedented increase in cruel attacks on migrants, including zero-tolerance policies that make it more difficult for them to enter the United States legally. Indeed, they need our love today more than ever.

My faith requires me, with every fiber of my being, to oppose the inhumane conditions in which infants, children, and their parents are being caged – in overcrowded, cage-like facilities; without diapers; forced to sleep on concrete floors; and to go without toothbrushes or showers for weeks. This disgraceful policy of deliberate cruelty is a moral affront to the values to which this nation aspires. It demands not that we look away, but rather that we look closer, that we draw the eyes of the nation to this place where our collective humanity is being questioned.

Will we act now to stop the dehumanization of fathers and mothers who, like each of us, would do anything to protect their children and see them thrive? Or, will we let this administration continue on a path that will leave our children and grandchildren asking us, “What did you do in the face of this inhumanity?”

We call on the administration to uphold the dignity of immigrants, to stop putting families in cages, to stop tearing children away from parents, and to stop denying asylum seekers their legal rights.

We call on Congress to stop funding detention and deportation by ICE and CBP. Invest in the wellbeing of our immigrant neighbors, not in the policies that criminalize them. Fund more immigrant judges and provide more legal assistance to those migrants – thereby ensuring their legal rights are protected by our nation, not violated by our nation.

We are currently in the middle of the three weeks leading up to Tishah B’Av, when Jews mourn the destruction of the ancient temples that stood in Jerusalem and led to our exile. We know what it’s like to flee home, to face persecution. Our history would have been so much different had others stood up for us and had other nations welcomed us. So this year, we not only mourn our own history, but also the harm being inflicted on those who are fleeing their homes today. Like the biblical Rachel who wailed with bitter cries for her children (Jeremiah 31:15), “kol b’ramah nishmah,” so do we cry out for these migrants to our elected officials who have the power to change our country’s immigration system.

We join with our partners in the immigrant community and with other people of faith to urge the administration to enact just and compassionate immigration policies now.

Our God who is impatient with injustice would have it no other way.

This post is adapted from remarks Rabbi Rick Jacobs delivered at the “Moral Monday at the Borderlands” event in El Paso, TX.

Want to get involved in thre Reform Jewish community's immigration and refugee justice work? Here are seven ways to take action, as well as a primer on how and why we're taking action. TO learn more, visit the Religious Action Center of Reform Judaism's Gilbert and Eleanor Kraus Initiative Immigrant and Refugee Justice Action Center.