Why We Went: How 17 Reform Jewish Leaders Took a Stand for Civil Rights in Florida with Dr. King 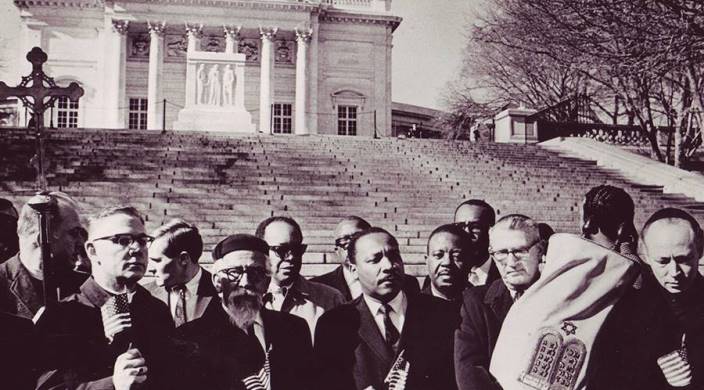 A version of this post was published on the RACblog on February 12, 2014, in advance of the celebrations this summer around the 50th anniversary of the Civil Rights Act of 1964. This landmark legislation, as well as the Voting Rights Act of 1965 were both drafted in the Sillins Library at the Religious Action Center in Washington, D.C. The story of the 16 rabbis and Commission on Social Action Director, Al Vorspan, who marched with Rev. Dr. Martin Luther King, Jr. in St. Augustine, FL, in 1964 highlights one of the key moments in the history of Jewish involvement in the Civil Rights Movement. As we commemorate Martin Luther King, Jr. Day on January 19, 2015, we remember how our rabbis answered the call in 1964. Let us all reflect on the ways we can answer the call to fight for justice in our society today.

Ask 1,000 people around the country “Where was the largest mass arrest of rabbis in United States history?” and the only answer will be 1,000 blank stares. Ask 1,000 people in St. Augustine, Florida and the result will be the same! The story of June 18, 1964, as 16 rabbis and one administrator from Judaism’s Reform Movement were arrested for responding to the call of Rev. Dr. Martin Luther King, Jr., is (in the words of Carol Rovinsky, chair of the Justice, Justice 1964 Committee of the St. Augustine Jewish Historical Society) “Under-told! Not as well-known as it should be!”

For the first time ever, this story is now being shared with the general public. A copy of the original letter written by the arrested rabbis and administrator from their jail cell has been included in “Journey: 450 Years of the African American Experience,” an exhibit mounted by the City of St. Augustine. The exhibit marks the 50th anniversary of the Civil Rights Movement, which eventually led to the U.S. Senate passage of the Civil Rights Bill of 1964. The exhibit is also carefully conscious of the upcoming 450th anniversary of the founding of St. Augustine in 1565 by Pedro Menendez de Aviles, a Spanish admiral and explorer who brought with him as many as 300 enslaved Africans to Florida.

In the spring of 1964, as the nation’s “First City,” St. Augustine was to celebrate the 400th anniversary of its founding, while the United States Senate was considering the Civil Rights Act. With the intent of keeping civil rights on the front page, Reverend Martin Luther King decided to launch a massive campaign to end segregation in the nation’s oldest city.

King knew that St. Augustine would be a challenge. So, he called the Central Conference of American rabbis and upon his friend and supporter, Rabbi Israel Dresner, and said “We need you down here with as many rabbis as you can bring with you!”

Sixteen rabbis, along with the director of the Commission on Social Action for Reform Judaism, Al Vorspan, came to St. Augustine. Early on the morning of June 18, 1964, they found themselves sitting in the pews of St. Paul’s AME Church. From the pulpit, Dr. King gave directions to the crowd: march to the waterfront, then north to the Monson Hotel and Chimes Restaurant to integrate lunch counters and the hotel swimming pool.

By early afternoon, the 17 Jews had been placed under arrest and were taken to the St. Johns County Jail, where they were booked and thrown into a cell.

There they spoke of the reasons they had left the comfort of their homes to come to the seething heat of St. Augustine. They came, they said, in a letter composed by the light of the one light bulb burning in the corridor outside their cell, “Because we realized that injustice in St. Augustine, as anywhere else, diminishes the humanity of each of us. We came as Jews who remember the millions of faceless people who stood quietly, watching the smoke rise from Hitler’s crematoria. We came because we know that, second only to silence, the greatest danger to man is loss of faith in man’s capacity to act.”

The St. Augustine Jewish Historical Society has invited those who are still alive among the arrested to return and relive those fateful days half-a-century ago. They have been invited to participate in a Jubilee, leading all in a rededication to the cause so often cited by Reverend King, from the Book of Amos, 5:24, “Let Justice roll on like a river, and Righteousness like a mighty stream!”

The voices of those arrested can still be heard! “We came to stand with our brothers and in the process have learned more about ourselves and our God. In obeying Him, we become ourselves; in following His will we fulfill ourselves. He has guided, sustained and strengthened us in a way we could not manage on our own.”

For resources for Martin Luther King, Jr. Day and “Shabbat Tzedek,” the Shabbat that precedes it, the Religious Action Center of Reform Judaism has prepared guides, historical documents and other materials. Learn more about how you can take action on the issues that Dr. King and the 17 Reform Jewish leaders marched in St. Augustine to address by visiting the RAC’s pages on Civil Rights and Racial Justice. 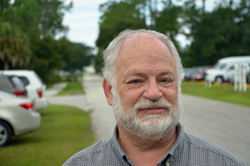 Rabbi Merrill Shapiro is the president of the St. Augustine Jewish Historical Society and chairs the national board of trustees of Americans United for Separation of Church and State.