Wonder of Wonders: Fiddler on the Roof in Yiddish 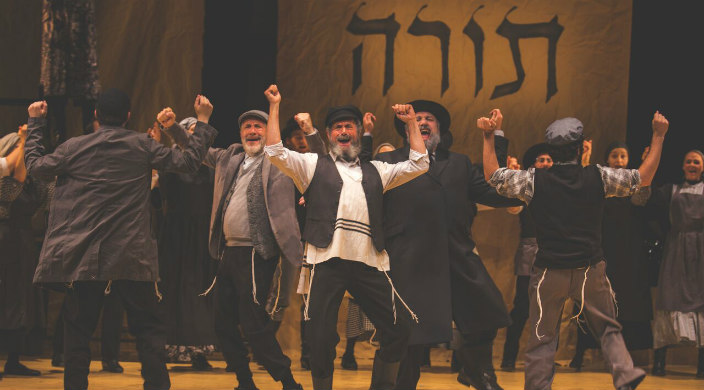 The sun never sets on the small Russian shtetl (village) of Anatevka and its colorful inhabitants? Why, you may ask?

Because the hit musical Fiddler on the Roof has been entertaining audiences non-stop around the world since its Broadway debut in 1964.

And now, thanks to the National Yiddish Theatre Folksbiene (People’s Stage), a Yiddish version by Shraga Friedman (with English and Russian subtitles) has reached the American stage. Directed by Joel Grey (best known for his role as the emcee in “Cabaret”), Fiddler Afn Dakh is a sensation, playing to full houses and standing ovations. Extended for the fourth time, the show will run until December 30 at the Museum of Jewish Heritage: A Living Memorial to the Holocaust in Manhattan.

Fiddler in Yiddish imbues the musical with an aura of authenticity. In the words of a friend who recommended this production, “Instead of caricatures, we have characters.” That may be because Yiddish was the mome lushen (mother tongue) of the Jews in 1905 Tsarist Russia, the show’s setting. Fiddler is based on Tevye the Milkman stories by Sholem Aleichem (Sholem Rabinovich), celebrated as “the Yiddish Mark Twain.” Add to that the emotional power of a language that evolved out of the historical experience of eastern European Jews who have had to find ways, including the use of humor, to contend with tragedy while maintaining hope. As Jackie Hoffman, who plays Yente the Matchmaker, puts it, “Yiddish makes the peaks and valleys deeper.”

Those of us in the audience who know some Yiddish were at home with expressions that defy easy translation, such as “a nachtike toog,” literally “when night becomes day. “It won’t happen” just doesn’t do it justice.

If Beowulf Boritt’s set design has one overriding message, it is the word “Torah,” prominently displayed on a paper banner. In the pogrom scene at the end of Act One, a Cossack rips the banner apart, tearing Torah in two. In the second act, the banner is restored with a trail of x-stiches running across it like a train track traversing a map.

Why, you may ask, did the show’s creators feature Torah and not Tradition, the show’s overarching theme?

In the English version, Tevye asks, “And how do we keep our balance? That I can tell you in one word: Tradition.”

In the Yiddish version, Tevye says, “And how do we keep our balance? For that I have one answer – God is a father and holy is His Torah! That I can tell you in a word... Tradition.”

Perhaps translator Shraga Friedman was mindful of the fact that Israeli audiences (Fiddler Afn Dakh premiered there in 1965) are composed of many Jewish traditions, but few would argue that God and Torah are at the core of Judaism.

Iconic shows like Fiddler have a life of their own over time and space. Even when the music and lyrics do not change, the actors, audiences, and venues can radically change the experience.

I attended a performance of Fiddler staged by Berlin’s famous Komische Oper in Communist East Germany in 1980. The show had been running for four years straight to sold-out audiences. As the cast, which included no Jews, sang “Tradition, Tradition” in German, my mind went to the images of emaciated women I had seen earlier in the day at the Ravensbruck concentration camp museum.

I looked around at the white-haired people in the audience and wanted to scream out, “It was you who tried to destroy the very tradition you find so delightful!” I then imagined myself being dragged to a mental hospital by Stasi agents and released only after accepting the lie that East Germans were the anti-fascists – the good guys – and West Germans on the other side of the Berlin Wall were Nazis responsible for the Holocaust. I left the theater in disgust.

My experience of Fiddler Afn Dakh at the Museum of Jewish Heritage: A Living Memorial to the Holocaust, was colored by the anti-Semitic attack in Pittsburgh two weeks earlier. After the actors took their final bows, they appealed for money to aid the bereaved survivors.

Another contemporary event that resonated with many in the audience was the forced exodus of Anatevka’s Jews in the final scene and the plight of asylum seekers at the U.S.-Mexican border.

After the show, a few of us, all immigrants, walked to the shoreline and watched as a radiant sunset illuminated the Statue of Liberty and Ellis Island.

After ending its run at the Museum of Jewish Heritage on December 30, this production will move to Off-Broadway’s Stage 42 with previews beginning February 11, 2019 prior to opening on February 21. Tickets will go on sale soon.

END_OF_DOCUMENT_TOKEN_TO_BE_REPLACED

Two films from acclaimed Jewish filmmakers have debuted during award season this year, each taking semi-autobiographical looks at troubled childhoods. Each picture delivers award-worthy performances from many well-known actors, including Anthony Hopkins and Michelle Williams as sure bets to score Oscar nominations.
Jewish History
Image