Writing From the Edge: Calls for Inclusion in New Israeli Poetry 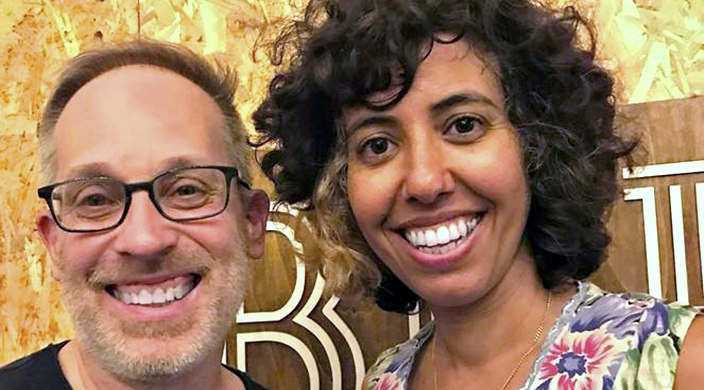 “I am the mizrachi Jew you don’t know!” writes 38-year-old Adi Keissar – the Israeli poet who’s leading a movement to open up Israel’s poetry and cultural scene to the heritages that Jews brought from their Middle Eastern and North African backgrounds. While we wait eagerly for Adi Keissar to find the right venue to share her poetry in English translation, the work that she and her colleagues are doing needs to be shared now in the North American Jewish community, which a research report recently revealed has been undercounting Jews of color in demographic studies.

Keissar was born in Israel and grew up in Jerusalem in a family of Yemenite origins; members of her family appear in some of the most significant poems. (All translations in this post are mine.) On her father’s side, the family’s Israeli story began in 1882 when her great-grandfather arrived in Jerusalem from Yemen, by foot and by boat. In a poem called, “Chronicles,” she describes his first moments in Nachalat Shiva – one of the earliest Jewish neighborhoods built outside of the Old City:

and he stood in Nachalat Shiva
and read from a Torah scroll
so that someone would invite him into a home on Friday
before the start of the Sabbath
and so that they wouldn’t be afraid that he is an Arab.

In the context of this poem, she confronts being a student in high school where the official history curriculum glosses over the experiences of families like hers.

Her mother’s family came to Israel from Yemen in the 1950s. In a powerful poem about her grandmother, we come to understand the struggles of a young Israeli child as she tried to make sense of her heritage, ultimately embracing that heritage and the strength it imparted to her. This excerpt is a touching description of being with that immigrant grandmother who only spoke Yemenite Arabic:

I never understood
a word said
by my grandmother,
but her hands I understood
her flesh I understood
although she never
really understood
the words I said
and only loved my small body
of her daughter’s daughter.

Such formative experiences can be seen in Keissar’s founding of Ars Poetica, an alternative to poetry nights that she described as male-dominated and full of people who took themselves too seriously. In this interview, she says about Ars Poetica:

It was …an attempt to create a space for people to feel at home in poetry. Too often people in this genre try and make it elitist – only some people can understand it, only some people can write it, etc. I wanted it to be for everyone, for people to feel at home; I wanted the poetry night to be like a party: edgy, multi-sensory, connected to music and a mix of so-called “high and low” cultures.

The name Ars Poetica is a provocative play on the Latin for the “art of poetry.” “Ars” in Israeli slang, from the Arabic word for “pimp,” is used to refer to dark-skinned Israelis from middle eastern countries who are thought to be “vulgar, streetwise, uneducated, no manners, up-front.” Keissar says that reclaiming this pejorative word as she has expresses her desire to “to mix ‘street’ and ‘culture’ which, as I say, go together for me.”

Keissar’s words and gatherings are playing a role in how Israel, like America, is dealing with racism. In “Chronicles,” the same poem discussed earlier, she asserts her identity in a dominant culture, a culture from which she and Israelis like her feel excluded because of how they look and where they or their families originated:

It’s the poet’s job to hold up a mirror to what’s happening around us, to question the status quo, and, hopefully, to want to aspire to do better. Adi Keissar’s description of the world – the messed-up world – rings true in Israel and in the world at large. In this excerpt from a longer, slightly graphic poem called, “I don’t know how to recite poetry,” she describes her role as cultural provoker:

For what is it to recite poetry if not to…
Yell at the person who cuts you in line
Put pots on the gas stove and burn the food
Hunt after small moments of happiness
And to take them to be hanged in the town square
To call a random number
And ask: Does water come out of your faucet?
Yes
What did you think that it would be Cola?
And hang up

Adi Keissar could be the poet who gives you voice. She could be the voice you need to hear. As a person, she combines her voice with action – and that is inspiration for all of us.

1 Kushit - a feminine adjective deriving meaning from Cush, which the Torah says is place where people have dark skin. Moses’ second wife is from Cush. It is a pejorative word in modern Hebrew, equivalent to nigger or shvartze in Yiddish.