On Yom Kippur, Hearing Isaiah’s Prophetic Voice at the Kotel 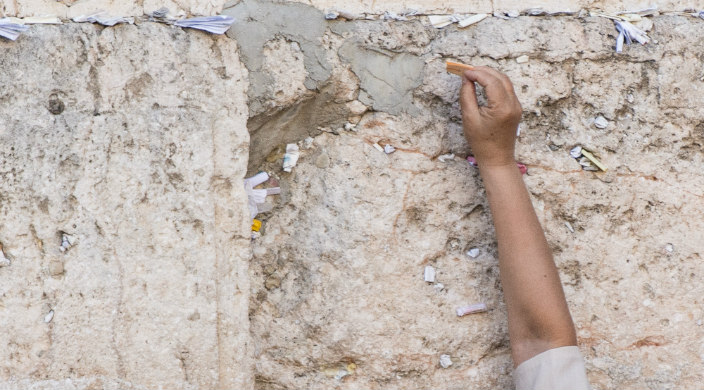 Build up, build up a highway! Clear a road! Remove all obstacles from the road of My people! (Isaiah 57:14)

On Yom Kippur, when haftarah readers all over the world will raise their voices in chant – so-lu so-lu… build up build up a highway – the symbolic image of Isaiah’s highway translates in my mind to the major roadways crisscrossing Israel today. Road-building and highway expansions in Israel are a good sign for the country’s overall economic health. I’m especially excited about the new high-speed rail between Jerusalem and Tel Aviv. This concretization of symbol doesn’t solely stem from my imagination – the revitalization of Hebrew in the early 20th century as a modern functional language is filled with examples of biblical poetic symbols literally hitting the pavement.  By the way, mesilah – a train track – is another modern Hebrew word taken from Isaiah (see Isaiah 62:10).

But momentary flashes of real Israeli highways slip away as the power of Isaiah’s prophetic metaphors call us to reflect upon the moral and spiritual shortcomings, the obstacles standing in the way of the Jewish people’s progress. As the haftarah for Yom Kippur, this message is intensified by the prophet’s words later in this section:

So, when I imagine myself sitting in synagogue this Yom Kippur and listening to Isaiah rail against the religious hypocrisy of not turning the experience of fasting into acts of justice, of helping the oppressed, my head again fills with current images of metaphoric and real construction both demonstrating obstacles to realizing Isaiah’s call to justice. One example in Israel is particularly striking to me.

During the early summer uproar over the pluralistic prayer space at the Kotel (Western Wall), when liberal Jewish activists criticized the leaders of major Jewish organizations about why they were uniting vociferously only about the injustice of not having an egalitarian prayer space, which they see as a personal freedom issue, and not over major injustices that place hardships on oppressed and impoverished populations daily, I thought ahead to this passage from Isaiah and to a similar idea in the prophet Micah. Many of these young activists, alumni of our best Jewish educational experiences, felt justified in reminding Jewish leaders of what we taught them about the prophets:

With what shall I approach the Lord…shall I approach him with burnt offerings...?   He has told you, O human, what is good, and what the Lord requires of you: Only to do justice, and to love goodness, and to walk modestly with your God. (Micah 6:6,8)

Personally, I see the opening of such honest conversation as constructive. American and Israeli Reform leaders responded to the critical questions raised about the energy being poured into the Kotel controversy by expressing the Movement’s longstanding social justice commitments more clearly and loudly. For the leaders of liberal Jewish movements, this pluralistic prayer area represents a space for religiously liberal Jews to bring the fullness of their progressive commitments to democracy and human rights. And, I think it is clear that this is part of what scares the haredi opposition.

Toward the end of the Yom Kippur haftarah, Isaiah says:

“People from your midst shall rebuild the ancient ruins, You shall restore foundations laid long ago, and you shall be called ‘Repairer of fallen walls, restorer of lanes for in-dwelling” (Isaiah 58:12).

I see these words describing the day when liberal Jews will enter the Kotel plaza, congregating in prayer with all their values. I know the progressive siddurim (prayer books) they will daven (pray) from will give voice to social justice ideals that Isaiah and Micah teach us. Inclusion and egalitarianism will be celebrated as minyanim (prayer groups of at least 10 people) are formed.  I hope, too, that the symbols and architecture of the space will give expression to the values encompassed by peace and a respect for all humanity.

Sadly, we don’t know how close we are to realizing even the preliminary vision of this section of the Kotel. Beyond its potential to give voice to liberal Jewish prayer, I’d like to see it go beyond what Isaiah envisioned as repairing walls and restoring lanes for in-dwelling. Is it not too daring to think that this new area in Jerusalem’s Old City might also become a connector to Muslim and Christians praying nearby in the spirit of co-existence?