Together with your children, watch these Shalom Sesame videos to learn about Shavuot and celebrating the Torah. Then try some of the discussion ideas and activities recommended to further extend the lessons learned in the videos. 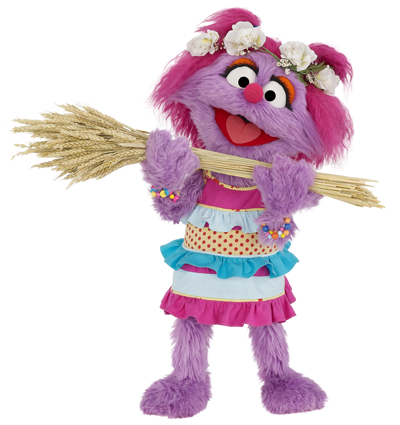 Shavuot, which in Hebrew means “weeks”, is celebrated seven weeks after Passover. Each day between the two holidays is counted. On Shavuot the Jewish people received the gift of the Torah and the wheat harvest begins in Israel. Both events play a part in the rituals and customs of the holiday.

Together with your children, watch the Shalom Sesame videos below to learn about Shavuot and celebrating the Torah. Then try some of the discussion ideas and activities below recommended by Reform Jewish educators to further extend the lessons learned in the videos. If you wish, share your experiences and ideas in the comments sections below!

A springtime celebration of stories. The Jewish people are sometimes referred to as "the people of the book" because storytelling, through the Torah and other Jewish texts, has shaped Jewish values and life. Storytelling is also one of the best ways to share Jewish traditions with children. Your family can start by telling and retelling stories of your family's customs and celebrations, and by collecting and reading Jewish storybooks.

The importance of rules. At Mount Sinai, the Jewish people received the Ten Commandments, ten important rules to help them live together. What is a rule?  Why are rules important? Why do you think the Jewish people needed rules after they left Egypt?  Do you have family or class rules? What do you think life would be like if there were no rules?  Why is it sometimes hard to stick to the rules?

Harvesting wheat. Do you know how bread is made? Have you ever seen wheat growing in a field?  Can you describe it? In ancient times, Jewish people in Israel used to bring the very first sheaves of wheat to the Temple as a way of saying thank you for the good crops.  What are some different ways to say “thank you”? Can you make up a special thank you to the farmer, the baker and the store keeper who all help so that we can eat bread and other food?

Decorate for Shavuot. A Jewish legend teaches that at the moment the Torah was given, Mount Sinai bloomed with flowers. This legend is the reason that on Shavuot, greenery and flowers are used to decorate the home and the synagogue. Make or collect flowers and branches and decorate your space in honor of Shavuot.

Telling stories all through the year. Sharing classic Torah stories with kids can also be a great way to communicate Jewish values. After you watch the animated version of Moses on Mount Sinai below, your kids can draw their version of Mount Sinai, or together you can create your family's very own Ten Commandments. While you're at it, the biblical story associated with Shavuot is the Book of Ruth, which is a goldmine of values to teach your kids, like the importance of charity, friendship, kindness, and compassion.

Making our own Jewish stories. Many good stories are the result of collaborations between different people, even throughout Jewish history. Have your children work together to make books illustrating their favorite Jewish story—maybe even ask them to put a twist on the story (try setting the story in modern times). Maybe one child can be the illustrator and the other can be the writer, or have each child complete her own page. Working together to tell stories is not only fun, but also a great way to participate in this ancient Jewish tradition.

Up all night. The holiday of Shavuot celebrates the gift of the Torah to the Jewish people, and is a great time to think about how to incorporate Jewish storytelling into your family's life. The most common Shavuot custom is to stay up all night and study the Torah. Kids love late-night festivities, and you can celebrate the spirit of this tradition on Shavuot or anytime by designating a special "night of storytelling," when you stay up late reading your favorite books together.

First Fruits. Shavuot is also called chag habikurrim – the festival of the first fruits.  The first fruit of the wheat harvest in Israel was brought to the Temple on Shavuot.  During the months following the holiday and all the way until Sukkot, the first fruits of the other Seven Species (wheat, barley, grapes, figs, pomegranates, olives and dates) were brought when they ripened.  The bikkurim (first fruits) were placed in baskets and brought to Jerusalem in a festive parade with music and dancing.  You can re-enact the pilgrimage complete with costumes and music.

Moses on Mount Sinai
Grover and his friends share a story.

Harvesting Wheat
A young boy in Russia helps to harvest wheat on his uncle’s farm.

Staying Up All Night
Avigail and Brosh study, sing, and stay up while celebrating Shavuot!

Street Story: Countdown to Shavuot
Savta Shoshana is so excited for Shavuot that she uses her calendar to count down the days!