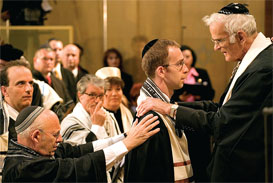 Travel abroad and you’ll witness, as I have, the wonders of Jewish rebirth and resilience in places where Judaism was once on the edge of extinction—and now is on the ascent!

When I visited Poland in 1990 after the fall of the Communist regime, I found only a handful of elderly Jews struggling to survive in one functioning Warsaw synagogue. Today Poland’s Jewish community numbers approximately 30,000—including enthusiastic participants of the Progressive communities in Warsaw, Krakow, and smaller centers. In 2010, 600 people joined me in grappling with Jewish texts, history, and contemporary life at a Limmud Jewish study weekend in Warsaw. Every summer a nine-day Jewish culture festival in Krakow attracts hundreds of people and artists worldwide for concerts, exhibitions, plays, lectures, and workshops. Warsaw’s popular Yiddish theater features non-Jewish actors. And the Museum of the History of Polish Jews—supported by the Warsaw municipality and the Polish government—chronicling the impact of Jews on Polish history, will open in April 2013.

In the early 1990s, when only one Progressive congregation existed in the entire Soviet Union and Russian-speaking Jews began emigrating West en masse, I was convinced: This is the end of Eastern European Jewry.

I was wrong. Today, there are hundreds of congregations throughout the FSU. In our own Movement, six energetic Progressive rabbis in Moscow, St. Petersburg, Minsk, Kiev, and Simferopol (Crimea), together with a few dozen graduates of the Movement’s Machon para-rabbinic program as well as Machon-trained community workers and leaders, are serving and sustaining 40 communities nationwide. Moreover, each year some 1,000 Russian Jews attend our Movement’s adult, family, and youth camps, learning about Judaism for the first time in their lives.

A similar Jewish renaissance is underway in the Czech Republic, spearheaded by Beit Simha, the liberal Jewish community in Prague. Local teachers as well as visiting rabbis and lecturers are teaching courses in Judaism, history, and Hebrew to groups of 30–50 Jews. Annual conferences, sponsored by Beit Simha and held in Decin, Liberec, and Brno, among other places, attract participants of all ages.

Being Jewish here is very different than in North America. Only a handful of Czech-speaking people areknowledgeable enough to teach and conduct services. Also, the Czech Republic’s Progressive community has been struggling financially, despite the support of generous American philanthropists. During the Communist era, the government was responsible for vast realms of life, and it is taking time for local communities to adjust to carrying the full financial burden themselves. Another impeding factor is the Orthodox Movement’s control of the Czech Jewish community’s purse strings. After the Second World War the Liberal Movements slowly organized themselves, and by that time the Orthodox groups had received official government recognition. There is hope, however, that within the year the Progressive Movement will be recognized as a religious (rather than a cultural) organization and henceforth receive government assistance.

The resurgence of Jewish life in Germany has been both miraculous and challenging.

In May 1945, the German Jewish community was totally devastated. Almost half the population had emigrated before the Second World War, and most of those who remained were killed. Over the decades, immigrants began arriving, mainly from other parts of Europe and Israel, and a new Jewish community slowly emerged. Often the newcomers hid their Jewishness, fearful of being targeted by neo-Nazi thugs.

Today, some 130,000 Jews live openly in Germany, and the German Jewish community has the fastest growth rate in the world. The German government provides benefits specifically to Jewish immigrants and has helped fund the building of the Jewish Museum and the Holocaust Memorial in Berlin.

With some 24 congregations, the Progressive Movement is growing steadily, bolstered by the German government, which recognizes and provides it with financial assistance. A major milestone was reached in 2006, when the Progressive Movement’s Abraham Geiger College of Judaism, which trains rabbinic and cantorial students to serve in Germany and neighboring countries, ordained its inaugural three rabbis—the first ordainees in the nation since the Second World War. Afterward, German Chancellor Angela Merkel wrote that the event was “special because many did not believe that after the Holocaust Jewish life would flourish in Germany.”

Even with government sanction, Germany’s Progressive communities face the daunting challenge of meeting the needs of two distinct constituencies: new Russian immigrants who do not speak German and have been deeply influenced by Soviet Communism (the majority of congregants), and German-speaking congregants who have grown up in the open West German democratic environment. Moreover, because there are more Progressive communities than native rabbis, a small team of Progressive rabbis has to travel considerable distances to serve the 24 scattered congregations.

In many areas of Berlin, the local gentile population has memorialized former Jewish neighbors by installing sidewalk plaques near the buildings where they once resided. A plaque honoring Regina Jonas, who became the first German female rabbi in 1935, can be seen at her last residence, Krausnickstrasse 6 (Mitte). Though these memorials are reminders of a terrible past, they also portend a better future for the Jews.

Every time I visit Poland, the FSU, the Czech Republic, Germany, and elsewhere, my emotional involvement and commitment to our brethren in these emerging communities increases. I am convinced it will for you, too.

To be part of the unfolding, mirac­ulous journey of the Jewish people, read on….