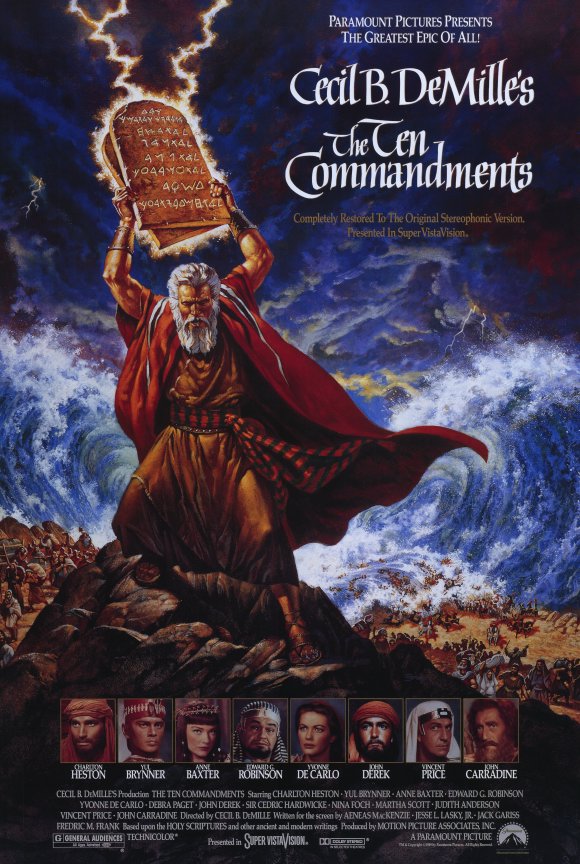 The holiday of Passover hasn't inspired quite as many popular film retellings as Hanukkah, but that certainly doesn't mean there are no good flicks to choose from. This Passover, check your local TV listings for some of these favorites from the staff of the Union for Reform Judaism.

"This is the classic Passover movie! Starring Heston as Moses, this epic Cecil B. DeMille film was filmed on location in Egypt, Mt. Sinai, and the Sinai Peninsula. DeMille actually made a silent version in 1923; the 1956 film was his second attempt to tell the biblical story of the Jews' exodus from slavery in Egypt. The film details Moses' life as an infant in the bulrushes through the Israelite's receiving the Ten Commandments at Sinai. It looks a bit cartoonish to modern eyes but was revered for its incredible sets (at that time, it was the most expensive film ever made) and stellar acting by an all-star cast. The film won the Academy Award for Best Visual Effects, particularly for the effects used in parting the Red Sea. Shown yearly on network TV around Passover and Easter, many families watch The Ten Commandments as an annual tradition, almost as fervently as participating in the Passover seder itself." (Annette Powers, Brooklyn, N.Y.)

"The Prince of Egypt is my kids' earliest retained memory of the telling of the Passover story. As we read the Haggadah they undoubtedly envision Dreamworks' renditions of what it must have been like to have been a slave in Egypt, Moses' rise to power, the experience of the splitting and then crossing of the Sea of Reeds, and the Israelites' long sojourn in the wilderness. Of course, there is no way Moses sounded anything like Val Kilmer, the actor – but the movie is a great way to prepare kids (and adults!) of all ages to read the Haggadah at the Seder table." (Daphne Price, Rockville, MD)

"When's the last time you saw a mainstream U.S. TV show devote an entire storyline to a Jewish holiday? That's what beloved '90s cartoon Rugrats did when its third-season finale focused exclusively on telling the story of Passover - and became the highest-rated show in Nickelodeon's history. In this extended animated episode, Grandpa Boris tells the story of the Exodus, in which Rugrats characters star in the reenactment, with young Tommy Pickles as Moses and mean-girl Angelica playing the Pharaoh of Egypt. (How progressive!) Though the holiday-themed episode debuted to critical acclaim and continues to be a favorite of both children and adults alike, you may want to watch with a wary eye: Back in the '90s, the Anti-Defamation League criticized its portrayals of older Jews as reminiscent of anti-Semitic, Nazi-era stereotypes, and Nickelodeon's president later promised not to include Grandpa Boris's character in future episodes." (Kate Kaput, Cleveland, OH)

"This half-hour short film covers some of the high points of both the story of the exodus from Egypt and the Haggadah. For some Jewish school and after-school programs (like mine), this was a staple in the 1990s, rewatched year after year. Rendered in beautiful "Claymation," this film is sure to get children interested in Passover, and provide a nostalgic trip down memory lane for many millennial religious school alumni." (Ariela Housman, Chicago, IL)

"For my young children, delivering any educational content via beloved Sesame Street characters is their preferred mode of learning, so I show this DVD in the weeks leading up to our seder to let them know that Jews everywhere are celebrating the same holiday. This Passover special delivers what is essentially an episode of Sesame Street, complete with a main story in which Grover and his friends have to find some maror for their seder plate. It also features adorable parodies of popular culture (like "Les Matzarables," in which puppets sing about searching for the elusive afikomen) and video of first-person experiences in which children visit the homes of Israeli children of Ethiopian and Iraqi origin to show their unique traditions. It took me awhile to get used to the new characters introduced in these DVDs, especially the Israeli grouch, Moishe Oofnick, and the high-pitched Avigail, but I guess Elmo and Oscar didn't have enough frequent flier miles to make the trip to Israel! Recommended to families with children under 6." (Debi Goldberg, New York, N.Y.)