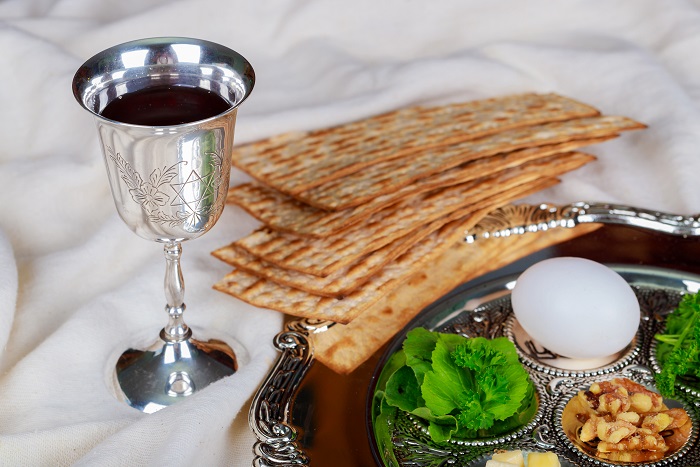 From the setting of the table to the evening's conclusion, the seder is full of opportunities to tell the Passover story in song. In the Reform Haggadah The Open Door we read, "year after year, the words and songs of the Haggadah draw us back... Over the centuries, new words of song and praise have been added to the ritual, lengthening and enhancing the seder."

Passover songs are essential to enhancing the seder while supporting a struacture that leads us from one part of the seder to the next. They reinforce our memories not only of the Exodus story, but also of celebrations throughout the years with relatives and friends, in our own homes or as guests, and at communal gatherings. Whether you are young, old, or somewhere in between, there's a Passover melody for you to enjoy.

Kadeish Urchatz serves as a “table of contents” for the evening's activities. From the initial Kiddush blessing to the eating of ritual foods to the telling of the Exodus story this straightforward melody lists the “menu” for the event in a way that all can understand, describing the steps in the order in which they're taken.

Our first encounter with matzah at the seder table takes place when the middle piece of matzah is split in two to create the afikomanafikomanאֲפִיקוֹמָן"Dessert" (Greek); matzah is the official "dessert" of the Passover seder meal. During the seder, the children traditionally "steal"and hide the afikoman, and it must be redeemed by the seder leader. (dessert). Explaining the presence of the matzah, we sing Ha Lachma Anya, “This Is the Bread of Affliction,” remembering the bread that our enslaved ancestors ate in Egypt. There are a number of modern renditions of Ha Lachma Anya, as well as a traditional middle eastern sounding chant.

For the youngest at the table, the moment we reach Mah Nishtanah is their time to shine. It's when they get to sing The Four Questions, Mah Nishtanah, “What’s Different?” or “Is this Night Different from All Other Nights?” The song is meant to spark youngsters” curiosity so they'll want to learn about Passover rituals. Over the centuries, the text of this song, derived from the Mishnah has been set to a multitude of tunes, including the traditional cantillation and contemporary and interpretative settings. (Learn about the history of the different melodies of The Four Questions.)

Now that we've heard The Four Questions, we answer them, starting with the explanation of how the story of our enslavement begins, told in the setting of the text of Avadim Hayinu, We Were Slaves in Egypt.

The story of the Exodus is punctuated by the dramatic description and naming of the Ten Plagues. Modern songs that illustrate this part of the story help children engage with the biblical tale. Melodies about the Ten Plagues, frogs, and Pharaoh help us take a light-hearted look at the text.

We say thanks for all of the many gifts and good things that God has done for us. In one of the most well-known melodies, we go down the list of things our people can be thankful for. And for each item on the list we assert, Dayenu, "[If Only This Had Happened,] It Would Have Been Enough for Us."

No seder would be complete without a place for Eliyahu HaNavi, Elijah the prophet, who is a guest at every seder table. Why? According to legend, the prophet Elijah returns to earth from time to time to help those in need. And, it is said that he will return to earth to precede the coming of the messianic age (Malachi 3:23-24). So we set a cup of wine and open the door to invite the prophet into our homes with the singing of Eliyahu HaNavi.

Toward the end of the evening, we have a series of tunes with numerous verses that help us remember lessons from Jewish history. At some seders, the tempo is increased with each new verse, culminating in an ultra-speedy rendition. Echad Mi Yodeia, Who Knows One, repeats the question to help us remember some of the foundations of our tradition, one God, two tablets of the covenant, three fathers, four mothers, and so on. Adir Hu, God of Might, extols the many virtues of God. And, Chad Gadya, One Goat, tells a humorous tale in which each animal or entity mentioned is one-upped by the next, until God ultimately supplants them all.

The custom of poking fun at stories from our tradition is a great way to invite interest and encourage more Jewish learning. Parodies use popular culture to spoof tales from our history like this one called Let Them Go, based on the song from Frozen. You can find many parodies of Passover and seder content set to Americana, movie, and show tune theme songs and many others online with a simple search.

This article just scratches the surface of the rich store of Passover songs available from contemporary and folk sources. Many of the selections mentioned here can be found in the songbook and CD set called Seder Songs. For even more choices, check out Song Playlists for Your Passover Seder.

As you make your Passover preparations, put music on your list. Swap songs and links with friends, ask musicians and clergy to share their favorite versions of the titles listed here. Invite relatives and friends who are elderly or from another part of the world to teach you songs from their traditions.