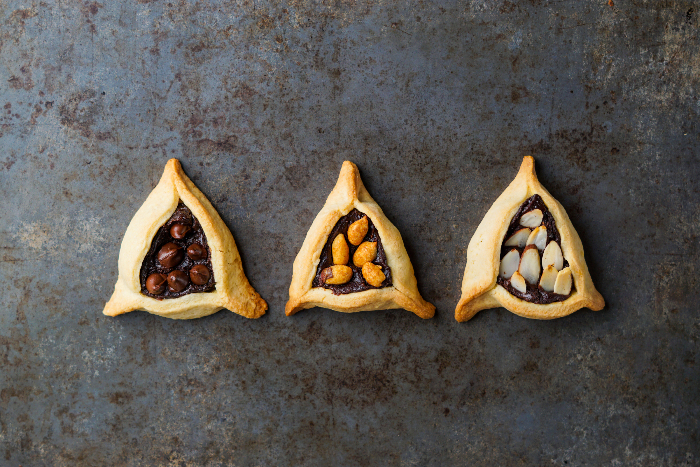 Hamantaschen, which can be savory or sweet and filled with just about anything, have become the most recognizable food associated with the holiday of Purim. But where do they come from?

The History of Hamantaschen

It's the celebration of good triumphing over evil, intelligence and courage trumping greed and oppression. And it's based on a story that took place some 2500 years ago: When the evil Haman's plan to annihilate the Persian Jews was foiled, he was hung on the gallows he himself had constructed. Is this an early example of "hoisted on one's own petard"?

Many wonderful foods are associated with Purim. Filled foods such as hamantaschen are typical, as they represent the intrigue associated with Queen Esther and Uncle Mordechai's uncovering of Haman's wicked plot. Sweet foods convey our wishes for a sweet future. Sephardic Jews eat cookies that are fried or baked in the shape of Haman's ear, which was purported to be twisted and triangular in shape. Ashkenazic Jews enjoy fruit or nut-filled triangular-shaped cookies or pastries, a shape said to represent Haman's hat, Haman's pocket, or, alternatively, the three Patriarchs: Abraham, Isaac, and Jacob.

Poppy seeds are another popular ingredient in Purim confections. Aside from their general widespread use in Eastern Europe and the Middle East, the seeds are said to be the only food Esther consumed during her three-day fast prior to revealing Haman's plot to the king. Some say poppy seeds also symbolize the promise God made to Abraham to have offspring as numerous as the stars of heaven and the sands of the seashore (Gen. 22:17)--the antithesis of annihilation. Mohn, or poppy seed filling (a mixture of ground poppy seeds, milk, sugar or honey, and often raisins and or nuts) was also a popular addition to triangle cookies in medieval Central Europe, and the finished confections were known as mohntashen, or poppy seed pockets. It is said that because these cookies sounded like the name "Haman," hamantaschen (or Haman's pockets) thereby became adopted in the 11th century as the first unofficial Purim treat.

Prune filling became traditional in the 18th century. As the story goes, in 1731 a plum preserve merchant named David Brandeis living in the Czech town of Jungbunzlau was imprisoned for allegedly poisoning plum preserves. Finally, he was acquitted. To celebrate his freedom, the Jews of Jungbunzlau filled their hamantaschen with povidl, plum preserves (prunes are dried plums), and thereafter referred to the holiday as Povidl. When Rhineland Jews moved east to Poland, Russia, and Hungary, they brought this hamantaschen tradition along with them.

Today, it's easier than ever to make hamantaschen. Prepared mohn filling as well as prune (lekvar) and other fruit fillings can be found in many supermarkets. And those who prefer ready-made hamantaschen cookies can buy them year round in bakeries across North America, another example of a traditional Jewish food going mainstream.

Whether you fashion your favorite dough into Haman's hat, pocket, or ears, may your Purim be festive and fun!

Find more recipes for a festive Purim. And if you like to cook, eat, and talk about food, sign up for The Jewish Dish, a monthly email of recipes, fun food facts, holiday tidbits, and more... all with a Jewish twist. Delish!