An Introvert’s Guide to Purim: How to Enjoy a Sometimes-Overwhelming Holiday 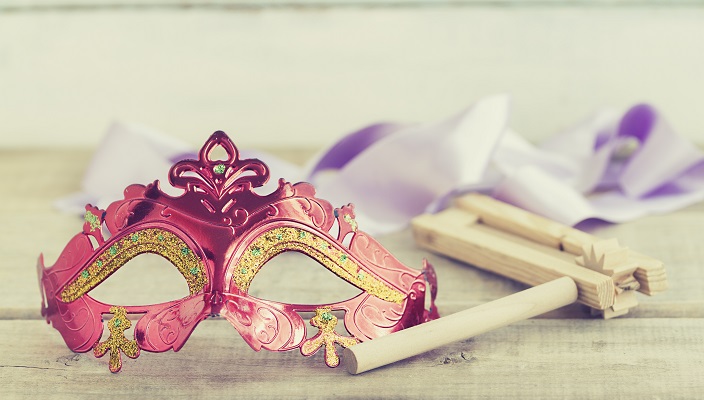 When it comes to practicing Judaism, I sometimes ask myself: How can I take part in a communal religion when being around people can be so draining? Purim can be a particularly difficult holiday for those of us who consider ourselves introverts.

When my home synagogue, Congregation B’nai Tzedek in Fountain Valley, CA, was just starting out, we had an annual Purim tradition: a Purim basket (shaloch manot) was delivered to every single member family within driving range. Every single one.

On the Sunday before the 14th of Adar (the beginning of Purim on the Hebrew calendar), volunteers would converge on the rabbi’s house (full disclosure: this was also my house since my dad was the rabbi) to set up an assembly line on the dining room table. We turned hundreds of hamantaschen, peanuts, flavored Tootsie Rolls, boxes of raisins, butterscotch hard candies, and a note from my parents wishing everyone a chag Purim (happy Purim) into neat little baskets of goodies, wrapped in colored cellophane, and tied with crimped curling ribbon.

In the background, the youth group practiced re-enacting the story of Esther, which they did in lieu of a Purim-spiel. Even without the slivovitz (plum brandy) that would accompany the reading of the m’gillah (scroll) a few days later, things were high-spirited. I was still in the single digits at the time, so I never thought about the fact that this was not something an introvert would enjoy. As long as I got to use scissors to curl the ribbons we used to close the baskets, I was happy.

There was a second part of the afternoon, though. Once the baskets were made, they had to be delivered, and this was the perfect job for introverts.

A second wave of volunteers was responsible for taking a bunch of the baskets, a map of a section of the city, including members’ addresses, and dropping off the baskets. The drivers would take one or two of the youth group kids with them. Why? Because ding-dong-ditch was an integral part of “Operation Purim.” The entire job of the drivers was to drive; the accompanying kids would get out of the car, race to the door, drop off a basket, ring the doorbell, and run back to the car. No interaction with the residents was required.

Nonetheless, the crux of Purim, the reading of the m’gillah, can still lead to sensory overload. The crush of people, the running up and down the aisles, the “cursed be Hamans” and “blessed be Mordechais” can all be overwhelming. So, I can't tell you how delighted I was when I joined a congregation that was big enough to have alternative programming. My first year at Temple Shaaray Tefila in New York City, I was blown away to discover that the congregation doesn’t only offer a regular m’gillah reading, a carnival, a parade, and a kids’ service. There’s also a time and place for people who want to do a little text study. In a room with other adults, volunteers read the m’gillah, which was followed by a discussion of the text itself. Best of all, we could hear each other, learn from each other, and have a good time. It was great!

Being an introvert doesn't mean you have to be isolated. Even we, as they say, can… be happy, It’s Adar!

Jennifer Einstein, a lifelong Reform Jew and introvert, claims that dressing as Mordechai, in sackcloth and ashes, was her best Purim costume ever.