What Purim Says About the Jewish Will to Resist 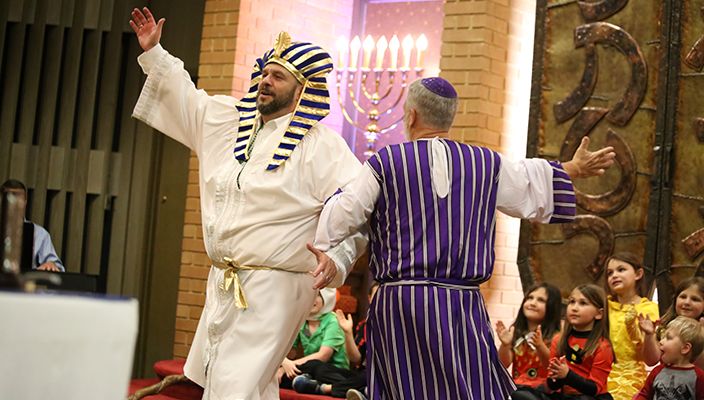 It’s safe to say that Purim is easily the most fun of all the Jewish holidays: We party, we dress up, we perform Purim-spiels, and we even have a few drinks, if we want (though it’s definitely OK to abstain ). In short, our celebrations embody the oft-used Jewish phrase, “They tried to kill us; we won. Let’s eat!”

Alongside all its festivities and frivolities, though, Purim is also a reminder of the very real and continuing threat of antisemitism – and ultimately an inspiration to us today as we continue to stand up to those who wish us harm.

The Purim Story and Antisemitism Today

For centuries, Jews have been blamed for the ills of society, and indeed, Haman convinced King Ahasuerus to kill the Jews after Mordechai slighted him by refusing to bow in his presence (the ultimate form of “tone policing”).

To this day, Jews are still targeted when we refuse to fall in line and bow to the demands of tyrants.

As recently as fall 2019, multiple elected officials in the U.S. made news headlines for calling American Jews “disloyal” or for having “dual loyalty” to the U.S. and Israel. Whether intentional or not, such statements echoed long-held historical tropes that cast Jews as less than true citizens.

“When I hear the words ‘dual loyalty,’ my first thought goes directly to antisemitism,” says Yolanda Savage-Narva, a Reform Jew living in Washington, D.C. “What does this actually mean? I can’t love my mother and my father? I can’t love the place where my ancestors come from and where I live today?”

It’s a topic with which Savage-Narva is all too familiar. She serves as the executive director with Operation Understanding DC, a nonprofit organization dedicated to promoting understanding, cooperation, and respect while fighting to eradicate racism, antisemitism, and all forms of discrimination.

Rabbi Dara Lithwick of Ottawa, ON, says the pervasiveness of the ‘dual loyalty’ canard makes her both sad and angry. “Over the past year, I have seen this ‘disloyalty’ or ‘dual loyalty’ bit coming up in different spheres,” she says.

“Purim offers an opportunity to highlight how we are all complex, special, holy, multivalent beings – that we all wear many hats and belong to many constituencies, and that our individual wholeness can strengthen us to improve our communities.”

Seeing Purim as a Call to Action

Rabbi Lithwick also sees Purim as a call to actively resist the forces that seek to limit us, divide us, and turn us against each other.

“Purim shows how we each have capacity to take action and support one another,” she says. “The themes of Purim around hiddenness (the name Esther literally means ‘hidden’) and coming out (Esther ‘came out’ as a Jew to save her people) are really important, particularly as we turn toward Passover and it's themes of revelation and redemption.”

Savage-Narva is similarly inspired to “come out” and resist antisemitism, saying that she sees this festival as a chance to teach and empower advocates.

“As we prepare to celebrate Purim this year, let’s remember: There are multiple ‘Hamans’ in our society today; people who attack us both through violence and language,” she says. “However, I see Esther as a ‘she-ro.’ Her courage and cleverness should empower us, as Jews, not just to celebrate Purim on the surface but to use it as a tool to plan, to discuss, and to resist.”

“By informing King Ahasuerus that his guards intended to kill him, he does the right thing without expecting any favor in return,” he says. “While this act may have empowered him to deny Haman the ‘loyalty’ he expected, his resistance was still with risk. He knew who deserved respect (Ahasuerus) and who didn’t (Haman) and he stuck to his values.”

The Lasting Lessons of the Purim Story

Purim teaches us that we do not have license to despair – not by any stretch. While it may serve as a harsh reminder of battles still left to fight, it is also an encouragement to be joyful, to be spontaneous, and most importantly, to be proudly Jewish.

Indeed, the very celebration of this holiday can be seen as an act of resistance, a proud stance against antisemites, fascists, and others who seek to persecute us for not falling in line. Every Purim-spiel we perform, every costume we don, and every moment of happiness we experience is an act of Jewish joy, pride, and survival.

When we drown out Haman’s name during the telling of the Purim story, so too do we blot out the name of every antisemite, past, present, and future. And when we honor the courage of brave Queen Esther, we honor every aspiring Jewish leader in our presence to fight as if our very existence depended on it.

May your Purim be one of joy, of frivolity, and, yes, of resistance. Chag sameach.