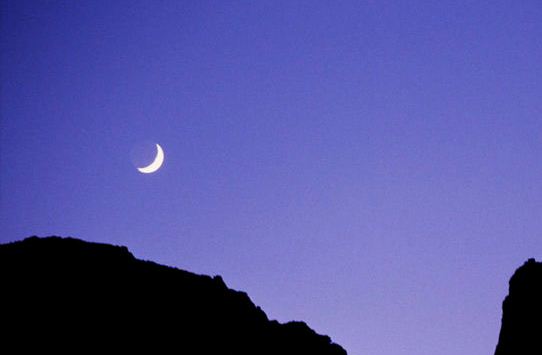 And on your joyous occasions-your fixed festivals and new moon days-you shall sound the trumpets over your burnt offerings and your sacrifices of well-being. They shall be a reminder of you before your God: I, the Eternal, am your God." (Numbers 10:10)

Throughout history, the Jewish people have had a connection to the moon. Other ancient cultures revered the sun. A smaller nation, we saw ourselves in the small moon. Just like God, the moon would always return providing us with the safety of its protective light.

Rosh Chodesh means "head of the month." The month begins with the appearance of the new moon (Rosh Chodesh). The ancient Rabbis understood Exodus 12:1-2 as requiring that the new month be determined by eyewitness testimony: just as God "pointed out" the appearance of the new moon to Moses and Aaron, so must witnesses declare before the judges of the Sanhedrin, the Great Court in Jerusalem, who stood in place of Moses and Aaron, that they had seen that form in the heavens.

While eyewitness testimony was a legal and ritual requirement, the Sages knew how to determine the calendar by means of astronomical and mathematical calculations. They also knew that the duration of the moon's cycle is twenty-nine and one-half days and that the new moon would be seen on either the thirtieth or thirty-first day following the previous Rosh Chodesh. Following the destruction of the Temple and the disappearance of the Great Court, the eyewitness procedure was abandoned, and these formulae became the exclusive means by which the Jewish calendar was set.

In biblical times, Rosh Chodesh, the first of every month, was a festival marked by joyous sacrifice, feasting, and trumpets. Later, in rabbinic times, bonfires were lit on the mountains to announce the arrival of the new moon.

Reform congregations generally observe Rosh Chodesh for one day, on the first day of the Hebrew month. Rosh Chodesh is observed in Reform synagogues by additions to the liturgy:

It is not forbidden to do work (m' lachah) on Rosh Chodesh. According to an ancient tradition, the holiday was a reward given to the women of Israel because they refused to surrender their jewelry for the creation of the golden calf (Exodus 32). Because of their righteousness, the women were exonerated from working on Rosh Chodesh. This does not mean that Rosh Chodesh is a "women's holiday," any more than the other Festivals are "men's holidays." Indeed, Rosh Chodesh stands as a reminder to all Jews of the rhythm of the Jewish calendar. Many Jewish women and synagogues have chosen to revive the ancient tradition, to interpret and to observe Rosh Chodesh as a day that bears a particular significance for them.

As early as the 1970s, Jewish women have been marking Rosh Chodesh as a time for prayer and study. Women and congregations have formed Rosh Chodesh groups, meeting monthly to observe the new moon, joining in song and prayer. Some of these groups have focused on healing liturgies while others have focused on the study of Torah. Many groups have been meeting regularly for years and have become a great source of spirituality and strength for their members.