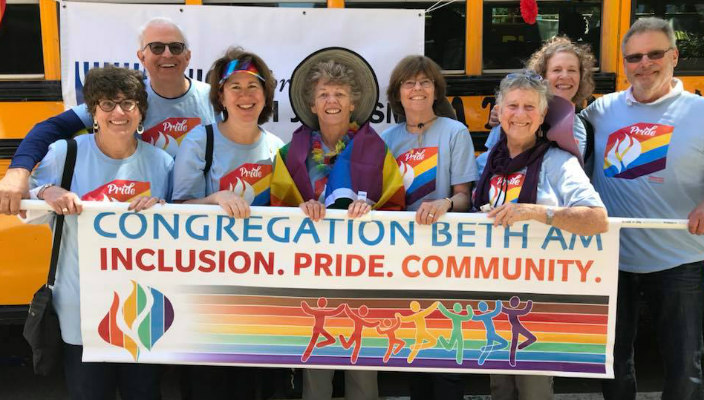 October is LGBTQ+ History Month. What began as a single day, National Coming Out Day on October 11 is now a month dedicated to honoring those who lived their lives as lesbian, gay, bisexual, and transgender individuals and the history of the community.

Recovering history isn’t always easy, especially for those who in an earlier time had to live closeted lives for fear of hatred, job loss, family rejection, and even death. But over the course of the last several decades, most notably since the Stonewall Riots of June 1969, the LGBTQ+ community has fought for its civil rights in the United States and has increasingly lived life openly as gay men, lesbians, bisexual, and transgender and gender-nonconforming people.

The Reform Jewish community can be proud of its groundbreaking work that welcomed, embraced, and fought for LGBTQ+ people and continues to do so even now as transgender individuals are under attack by our government.

The organized Reform Jewish Movement has stood with LGBTQ people since the early 1960s when the Women of Reform Judaism (then, Sisterhood, NFTS) became the first to call for the decriminalization of adult consensual sexual relations between people of the same gender. Yes, it wasn’t so long ago that gay sex was a criminal act! Both the Union for Reform Judaism and Central Conference of American Rabbis welcomed LGBTQ+ people and fought for marriage equality and our seminary changed its rules on ordaining gay and lesbian people as rabbis and cantors in 1990.

But as part of LGBTQ+ History Month, we should also look to celebrate the people who are part of the community and who have contributed to society.

In our congregations, we might consider a display of LGBTQ people who are members of our synagogues. Or perhaps we might highlight many Jews who have been leaders in the LGBTQ community, like Harvey Milk and Edie Windsor, to name a few who are no longer with us. Or others like Matthew Shepherd, astronaut Sally Ride, professional basketball player Jason Collins, author Oscar Wilde, comedian Wanda Sykes, actress Jodie Foster, and TV anchor Don Lemon - all of whom have come out publically and lived their lives with integrity.

The best antidote to homophobia and hatred is to put a face and name to those who are members of the LGBTQ+ community. As Harvey Milk, the famous Jewish San Francisco Supervisor who was assassinated in 1978 famously said:

In this month of October, let’s put a face and name to LGBTQ+ people everywhere. Let’s smash any remaining closets that remain and create the world we hope to see; a world where everyone is welcome in our Reform Jewish communities regardless of their sexual orientation, race, or gender, or socioeconomic status.

And if you want to learn more about LGBTQ+ History Month and the many LGBTQ+ people we can celebrate this month, visit lgbthistorymonth.com. There, you'll find not only see those LGBTQ+ icons selected for each year, but also more than 341 biographies of other LGBTQ+ people to celebrate!